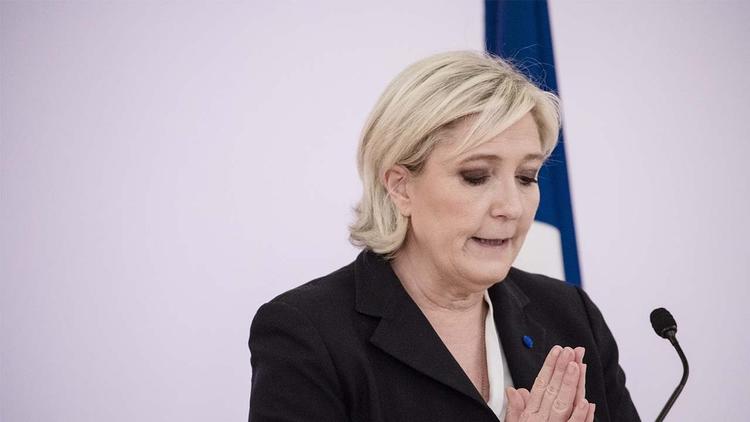 That hackers, most likely Russia-linked, were trying to throw the French election to Marine Le Pen this weekend by releasing thousands of emails from her opponent Emmanuel Macron, probably struck too late to achieve their goal. They were counting on the rule that candidates may not speak on election day, so Macron cannot defend himself from any controversies created by the emails. Russia has given loans to Le Pen’s campaign and it is pretty obvious that Moscow likes her anti-European Union, anti-NATO far right French fascism.

But these interlopers are late to the party. The biggest de facto backer of Le Pen’s hateful, far right nationalism is ISIL (Daesh, ISIS). And she is likely in the run-offs because of ISIL attacks on France. Otherwise, one of the more mainstream candidates would likely have defeated her. That is, ISIL has already hijacked the electoral process, whatever happens today.

Abu Bakr al-Baghdadi and his clique, some of them ex-Baath Iraqi officers, have taken revenge on the world for the American war on and occupation of Iraq 2003-11. Sunni Arabs, they felt that the US had overturned their hegemony in Iraq and installed a government of pro-Iran Shiites and separatist Kurds.

They are seeking polarization, a great war of Westerners of Christian heritage against Muslims, in which they can claim the mantle of natural protectors of Muslim interests.

They deployed this strategy in Iraq from 2003-2011, hitting Shiite soft targets over and over again, in an attempt to get the Shiites to over-react and crush the Sunni Arabs. They succeeded all too well. In 2006-2007, as Karen DeYoung at WaPo first showed, they provoked Shiite militias to ethnically cleanse the bulk of the Sunnis from Baghdad. The hard line Shiite fundamentalist government of Nouri al-Maliki (2006-2014) declined serious attempts to incorporate the Sunnis. (It is also true that not all Sunnis wanted to be incorporated into such a government).

Once they had their foothold in Syria from 2013, Daesh came back to Iraq and advertised themselves as saviors of the Sunnis. Some key Sunni leaders bought this line, though it would be unfair to say the Sunni Arabs in general did. In 2014 they brought in ISIL and seceded from Iraq. The largely Shiite army in the Sunni north was attacked by massive angry crowds and Daesh guerrillas and ran away, collapsing. Daesh set up a so-called “caliphate” (It is highly unpopular in the Muslim world and would show up as even more unpopular if poll-takers called it Daesh instead of the misleading “Islamic State”).

The politics and brutal violence of ethnic polarization allowed ISIL to take over 40% of Iraqi territory and to take two rural, thinly populated eastern provinces of Syria. They ruled sadistically and rapaciously, so that when the largely Shiite Iraqi army liberated strongly Sunni Falluja, locals hugged their liberators.

ISIL should get the Darwin Award for their mishmash of strategies. Terrorism as a strategy depends on not having a return address. That way the perpetrators can blow up something but the authorities cannot find them. (Ayman al-Zawahiri, a mastermind of 9/11, is still at large).

But declaring a capital (Raqqa in eastern Syria) and establishing a state with a bureaucracy gives ythem an obvious home address. If a state commits terrorism, that isn’t terrorism, that is an act of war. I don’t think ISIL ever had more than about 4 million people, which it more or less kidnapped, under its rule. It had no air force, and relatively little armor. For it to attack France and Belgium just guaranteed that NATO would ally with the Baghdad government, despite its close coordination with Iran, and give air support to the war effort against the faux “caliphate.” Hence, from fall of 2014 until now, ISIL has met with humiliating defeat after defeat and now just has a quarter of so of Mosul, its last significant urban possession (Hawija and Telafar are small cities, likely 50,000 each).

Like mercenaries signed up on the wrong side and in retreat, the ISIL crew are now looking for other killing fields.

Abu Bakr al-Baghdadi and his minions think it would be nice to have the Muslim neighborhoods of Europe under their control. That would bring in a lot of money and European Muslims often have high degrees of education and valuable skills.

The problem is that most European Muslims are secular-minded and uninterested in fundamentalism, much less in radicalism.

We think there are 5-7 million Muslims resident in France. It is hard to know, since French secularism makes it difficult to do a government survey of religion. Still, government ministries got permission to carry out such a survey a few years ago. Less than half that number show up in government surveys as Muslims. The rest are there, but they are just into other things (e.g. hip-hop) and do not have a strong marker of religious identity. This configuration is not unusual for minorities. In the US, there are roughly 5.3 million Jews but only 3 million of them say they believe in God. (there are another couple million persons with at least one Jewish parent who follow another religion). The proportion of agnostics among French Muslims is even higher.

There is no French Muslim community. Only 5 percent of French Muslims belong to a religious organization. There are only 10 Muslim schools in the whole country. Less than a fifth of French Muslims say they would vote for a Muslim candidate regardless of the person’s party affiliation. For the other 80%, “Muslim” is clearly not the most important marker of identity.

Abu Bakr al-Baghdadi of ISIL, and Ayman al-Zawahiri of al-Qaeda, hate this situation. It makes them angry every morning when they get up.

They want French Muslims to be extremists like themselves. They want them as virtual citizens of the faux caliphate.

They have a secret weapon in their quest to radicalize French Muslims.

If they can get people of Gallic heritage to attack the French Muslims and make their lives miserable, then ISIL will find it easier to recruit them.

Hence the November, 2015 attack on Paris, which deeply traumatized the country in the wake of the assassination by al-Qaeda in the Arabian Peninsula of staff of the satirical magazine Charlie Hebdo in January of 2015. The attack left 130 dead and 366 wounded. Apparently if it had gone better the terrorists had been planning to set off explosions in the stands of a soccer game that the president was attending, on live t.v. As it was, they hit a rock concert and a Cambodian restaurant– the softest of soft targets, with no security implications whatsoever. Then on Bastille Day (the French 4th of July) of 2016, ISIL swayed a Tunisian to drive a truck into a crowd, killing 86 and wounding 434.

That is the kind of attack they had launched on Iraqi Shiites for 11 years before they took over Sunni Iraq.

They were hoping that the French would go out and mistreat French Muslims and shore up the latter’s religious identity, radicalizing them and making them available for recruitment.

The French public will decide today whether ISIL succeeded in its plot against France.