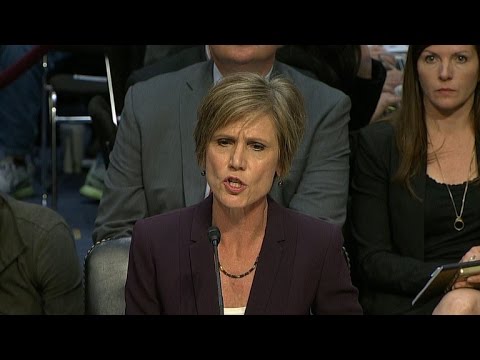 The Trump administration is running as hard and fast as it can away from Michael Flynn, whom Trump briefly appointed National Security adviser. But the facts of this case implicate Trump and his high officials (likely Steve Bannon was somehow involved, for instance).

I was attending to this scandal back when Flynn was in office.

It came out Monday that President Obama warned Trump not to appoint Flynn as National Security Council. Trump ignored Obama’s warning. Obama had fired Flynn as head of the Defense Intelligence Agency.

At Monday’s Senate hearings on Russian interference in our election, this was one exchange between Sen. Lindsey Graham and former acting Attorney General Sally Yates:

“GRAHAM: Ms. Yates, do you have any evidence — are you aware of any evidence that would suggest that in the 2016 campaign anybody in the Trump campaign colluded — colluded with the Russian government intelligence services in improper fashion?

YATES: And Senator, my answer to that question would require me to reveal classified information. And so, I — I can’t answer that.

A “no” answer could not possibly have required this answer, so the answer is yes, despite what Yates later said.

Yates was also clearly upset that Vice President Pence was telling the press that Flynn had not been in touch with Russian ambassador Sergei Kislyak before the inauguration. In fact, Flynn talked to him repeatedly in late December and discussed Obama-era sanctions on Russia, apparently with the intent to reassure Moscow that these sanctions would be made less severe or lifted under Trump.

Yates went to the White House to warn Pence and Trump that Flynn was taking them for a ride:

“YATES: So I told them again that there were a number of press accounts of statements that had been made by the vice president and other high-ranking White House officials about General Flynn’s conduct that we knew to be untrue. And we told them how we knew that this – how we had this information, how we had acquired it, and how we knew that it was untrue.

And we walked the White House Counsel who also had an associate there with him through General Flynn’s underlying conduct, the contents of which I obviously cannot go through with you today because it’s classified. But we took him through in a fair amount of detail of the underlying conduct, what General Flynn had done, and then we walked through the various press accounts and how it had been falsely reported.”

I wrote a little afterward:

“The Washington Post reports that conversations with no less than nine intelligence officials confirm that Flynn did talk with Russian Ambassador Sergey Kislyak about Obama’s sanctions on the Russian Federation. Flynn apparently urged the Russians not to be too upset about the new sanctions suggesting that the Trump administration would revisit them. Flynn at the time was not in any government office and had no right to negotiate with a foreign power, an act prohibited to civilians by the Logan Act. Flynn must have known that the Russian ambassador’s telephone is under NSA surveillance and so it is weird to the extreme that he would risk breaking the law in public, so to speak.”

It is illegal for a civilian (which Flynn was in December) to negotiate with a foreign power, and if the reports are true, Flynn violated the Logan Act.

“It is bad enough that Flynn may have committed this breach of the law. On top of that, when questioned about these allegations he lied and said he had not discussed sanctions with Kislyak. He not only lied himself but he told Vice President Mike Pence this lie and so arranged for Pence to go on television and repeat Flynn’s lie. Flynn wasn’t under oath, so I suppose this is just a lie and not perjury . . .

I also pointed out while Flynn was still in office that

“In 2015, retired Lt. Gen. Mike Flynn, having been fired by the Obama administration as director of the Defense Intelligence Agency and then having retired from the military, flew to Moscow and attended a banquet in celebration of the “Russia Today” network, the Russian state-owned television channel. RT does some good work, but you have to keep in mind that its editorial line is set by the Kremlin. The connection to the state is even closer than in the case of the Voice of America. Flynn appears to have been paid for his appearance in Moscow, and it is possible that he was paid quite a lot.”

We now know the sum was $30,000. I had pointed out, “Retired officers can be recalled and are cautioned when they retire that they should avoid such payments by a foreign government, since it violates the Emoluments clause of the Constitution (1.9:)”. I added, “Retired officers of the US military, inasmuch as they are subject to recall to service, are considered to be a ‘person holding any office of profit or trust’ under the United States.”

Flynn was briefed on this issue twice a year as a retired officer, but he still did not report the Russia Today honorarium to the Pentagon.

It turns out that Flynn’s propensity for hiding the truth or lying was itself a concern to the Department of Justice:

YATES: “And the Russians also knew that General Flynn had misled the vice president and others, because in the media accounts, it was clear from the vice president and others that they were repeating what General Flynn had told them, and that this was a problem because not only did we believe that the Russians knew this, but that they likely had proof of this information.

And that created a compromise situation, a situation where the national security adviser essentially could be blackmailed by the Russians. Finally, we told them that we were giving them all of this information so that they could take action, the action that they deemed appropriate.”

Since the Russians knew Flynn was misrepresenting his contacts with Kislyak and his relationship with Russia, that dishonesty itself left him open to being blackmailed by Moscow, Yates feared.

Despite Obama’s clear warning, Trump appointed Flynn to high office. And Trump and Pence were so gullible, they went on swallowing whatever Flynn told them.

It may be worse. If it were ever to come out that Trump or someone in the White House told Flynn to call the Russian ambassador and make him an offer he couldn’t refuse, would anybody be surprised? This scandal is redolent of Iran-Contra late in the Reagan era.

I think we have to start asking again, “What did the president know and when did he know it?”