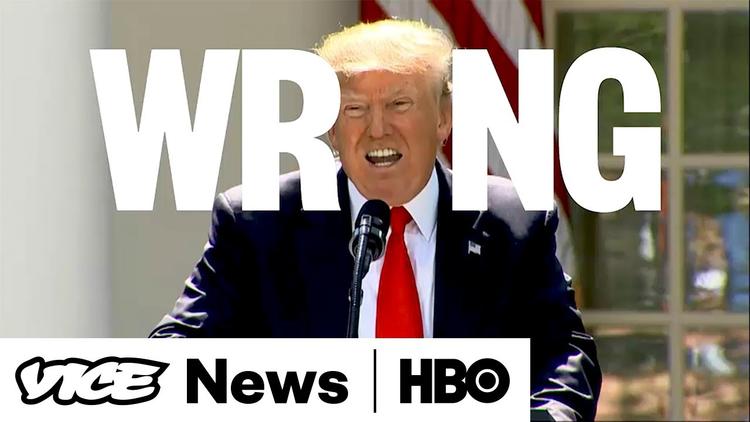 The last time capitalism faced a crisis this deep, it was 1929. People minded the Great Depression. All those people Joe McCarthy persecuted in the 1950s for having joined the Communist Party when they were young and angry had been angry because of the Great Depression. Specifically, they were angry at capitalists, especially bankers, whom they blamed for kicking millions out of their homes or off their land. Bank robbers even became celebrities. Semi-socialist policies like social security were implemented by FDR in part out of fear of popular anger.

It wasn’t Donald Trump or alt-NeoNazi Steve Bannon who was mainly responsible for taking the US back out of the Paris climate accord.

It was the Koch Brothers and the rest of Big Oil, and Big Gas, and Big Coal.

It was “energy” corporations who have vast inventories of worthless fossil fuels that they want to unload on the marks quick before everybody realizes they have all the usefulness for human beings of eating arsenic.

There are some well run companies in the world that improve people’s lives. But if corporate American is willing to alternately cook and drown our grandchildren to make a quick buck today, then they are our enemies. They are monsters. Period.

The compact we had with the corporations had already been reneged on long ago. They were supposed to make and distribute goods efficiently and provide an ever better standard of living to American workers.

But the real value of the average wage of a worker hasn’t increased since 1970.

The cost of a college education for a middle class family has skyrocketed, making it harder for families to get ahead. Graduates go out into the world with $150k debt.

Inequality is spiking. The opportunity for young people to rise beyond their social class has declined dramatically in US. America is no longer the land of opportunity.

So the compact between the public and the corporations was already in trouble. Workers still have not recovered from the 2008-9 crash.

The glib and deeply dishonest attempt of Big Carbon to represent the repudiation of the Paris accords as a victory for American workers will quickly be seen through. Factory jobs in the US have declined, but not because of environmental regulation. The big factor has been robotification. Coal jobs are not coming back.

The American public has shown itself incredibly patient as they watched a handful of corporations simply buy congressmen and senators and have them vote for the interests of the super-rich and against the interests of Americans.

But to have the corporations sell our children and grandchildren down the river for an extra few years of fossil fuel profits, surely that will not pass unnoticed. Maybe it will require a wake-up call. Likely sometime in the next few decades a really big glacier is going to plop into the ocean, immediately raising sea levels. It will be like the 2004 tsunami that killed nearly 300,000 people. But it will be worse because the water levels won’t go back down afterwards, leaving houses along the coast flooded.

And then I am really afraid of severe social conflict breaking out. People are going to be really angry. Rex Tillerson and Tom Pruitt will be long since retired or perhaps even no longer with us. But the corporate offices will be there, visible in the cities.

Right now, if I proposed that in order to combat climate change the US government needs to simply nationalize the country’s electrical grid and redo it with public funds, the snarky minions of the billionaires would just sneer at me. But after the glacier tsunami my idea will look perfectly reasonable and people will wonder why they hadn’t already done that. (They have, in some countries).

Casino capitalism has had a good run, especially since 1980. Its days are now numbered for reasons its captains could never have foreseen. The weather report is the specter haunting them, not the communist manifesto.