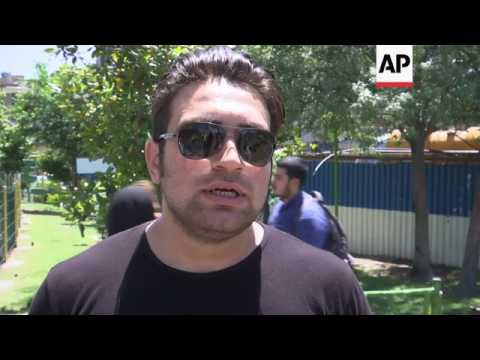 Militarising the region further and taking sides in a recently concocted sectarian conflict will likely end in tears.

Egyptian president Abdel Fattah al-Sissi, Saudi King Salman Bin Abdelaziz Al Saud, US First Lady Melania Trump, and US president Donald Trump. Picture by Balkis Press/ABACA/ABACA/PA Images. All rights reserved.The foreign policy milestones of the first months of the Trump administration are chalked up in the terms of successive reversals of positions taken by Donald Trump during his cam­paign. Trump used to say NATO was obsolete; now he does not. He was a cheerleader for Brexit; German Chancellor Angela Merkel persuaded him that the European Union was here to stay.

For a man who claimed on the campaign trail last year that “Islam hates us” and who twice attempt­ed to introduce a ban on certain Muslim visitors to the United States, having three Islamic sum­mits organised for him — with the Saudi royals, the Gulf Cooperation Council and the leaders of more than 40 Muslim-majority countries — was a triumph against the odds. In Riyadh, he stayed on script, sparing his hosts the daily flip-flops that have been his hallmark in foreign policy.

Urging those who listened to him to drive out the scourge of Islamic extremism is the easy part. Calling on a putative Sunni coalition to unite against Shia Iran is quite another matter. Choosing one side in a spiral of sectarian warfare is, of course, the exact op­posite of Barack Obama’s policy.

The 2015 nuclear accord the United States and five world pow­ers signed with Iran to restrain its nuclear programme was dismissed by candidate Trump as the “worst deal ever.” Yet, lacking any realistic alternative, as president, Trump is reluctant to tear it up.

Tehran has used Shia Arab proxies to build a power base in Iraq and Lebanon but Saudi Arabia spends billions every year exporting its brand of Wahhabi Islam and bigotry towards Shias and all other religious minorities. The kingdom has, for decades, done all in its power to destroy Sufi traditions. In Europe, it funds mosques in France, Belgium and the United Kingdom where bigotry is the daily fare of preachers. The terrorists who strike European cities regularly hail from a Sunni background. The hand of Iran is nowhere to be found.

This may explain why Germany and France are extremely reluctant to bring NATO into the Saudi-led coalition against the Islamic State (ISIS) as Trump is urging them to. Europe bears the brunt of ter­rorism linked to Middle Eastern affairs.

Its leaders also sense that of­fering Iranian voters, who have just defied the theocratic estab­lishment by giving a big majority to Hassan Rohani, the centrist president behind the nuclear deal, a renewed pariahdom, may not be the wisest course to follow. Irani­ans want to engage with the world, which is what Obama gambled on two years ago. The Saudis are just buttressing their autocracy.

However much they applauded him in Riyadh, the Saudis and their Sunni allies, not all of which, such as Kuwait, share the king­dom’s hard-line stance on Iran, will probably be disappointed by how far Washington will go to push back Iran’s influence in the region. Deterring Iran is one thing; rolling back its positions in Syria and Iraq is a different matter.

As it is, the Iranians are support­ing the US-backed government of Prime Minister Haider al-Abadi in Baghdad while the United States is not considering any move to oust Iranian ally, Syrian President Bashar Assad. Some Sunni coun­tries have been more forceful in in­tervening in Yemen but the result has been a political and a humani­tarian disaster. The 34-member Islamic Military Alliance Against Terrorism is full of fissures as its members just do not seem to be on the same page.

Trump put ISIS and Iran on the same footing, evils that must be eradicated. The contradiction that Iran is ISIS’s greatest enemy seemed lost on American lead­ers. The America First policy the president proclaims will have been comforted by the $380 billion worth of trade and investment deals, including $110 billion in US arms sales, signed during the visit.

Does any observer in the region believe that, by piling in even more sophisticated killing ma­chines, some of which Saudi na­tionals are not capable of manning themselves, peace can be brought to bloodied, often chaotic states?

Obama extended the drone war indefinitely, Trump is using ever more special forces, granting them a freedom of action that could one day cause a major upset, unfore­seen in Washington, to which every decision to move no longer has to be referred.

Militarising the region further and taking sides in a recently con­cocted sectarian conflict will likely end in tears.

America has adopted the Israeli and Saudi position — that Iran’s enmity to the United States is im­mutable but what benefit can the United States possibly derive from an unwinnable war in Yemen? Does it not understand that a uni­fied Sunni coalition of countries means nothing in North Africa, from Egypt to Morocco, where there are no significant Shia popu­lations and Iran is of little concern?

In October 2013, the distin­guished British Conservative politician Michael Ancram deliv­ered a lecture at the Centre for the Study of Diplomacy at Georgetown University in Washington. It was titled “How the West lost the Mid­dle East” over the past century. Trump’s visit will ensure the United States does not regain that region anytime soon.

Francis Ghilès is senior research fellow at the Barcelona Centre for International Affairs (Cidob). He was the Financial Times’s north Africa correspondent from 1981-95, and now contributes to newspapers such as the New York Times, Wall Street Journal, Le Monde, El Pais and La Vanguardia. He is a specialist in emerging energy markets and their relationship to political trends, and has advised western governments and corporations working in north Africa.