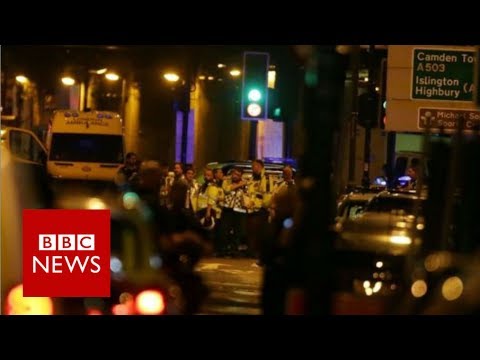 A man driving a white van swerved just after midnight early Monday morning into a crowd of Muslims coming out of Finsbury Park Mosque in North London, severely injuring British Muslims. The Muslim Council of Britain called it a “violent manifestation of Islamophobia.” The organization asked for more security for British mosques.

As of this writing, one man was dead and 10 others wounded.

One eyewitness told the Telegraph, “We are shocked when we heard the news because we were just having a good time. We were praying for peace and for Grenfell Tower.”

It is the Muslim fasting month of Ramadan and worshipers often go to mosque late in the evening to pray extra, supererogatory prayers.

An eyewitness interviewed in Arabic on Al Jazeera said that the man was “white,” was cursing the Muslims and spoke with a working class accent.

He was also careful to say that Finsbury Park is an ethnically mixed area with good relations among the races and that Labour Party leader Jeremy Corbin lives near the mosque and has made friendly visits to it. (I lived there one summer myself and remember the ethnic kaleidoscope).

Another interviewee, for the BBC, said that the man was shouting “I want to kill all Muslims!”

Finsbury Park Mosque Attack: “We held him (attacker) to the ground” – BBC News

Locals wrestled him to the ground and held him until the police came (some half an hour to forty minutes later). One said he asked them to kill him.

Unlike the London Bridge atrocity, this act of white terrorism will not be given the wall-to-wall coverage treatment on cable news.

Whoever the murderous bigot is that carried out this cold-blooded murder has fallen for ISIL’s (ISIS, Daesh) strategy, which is to polarize people of Christian and Muslim heritage and create hatred and insecurity between them. ISIL, which is rapidly losing its territory in Iraq and Syria, hopes to come west and embed itself in European and American Muslim communities. The problem for Muslim extremism is that very, very few Western Muslims are interested in extremism. Almost all of them appreciate the benefits of Western democracy and ways of life.

So ISIL does not have much hope of recruiting more than a handful of marginal personalities– petty thieves and losers. (For some reason it also only has any success in getting a few troubled young men of the second immigrant generation to join up. First generation and third generation immigrants are not interested. Apparently being in between worlds is alienating).

So what ISIL wants to do instead is to recruit white people of Christian heritage to beat up Muslims and terrify them and make them insecure. And then ISIL thinks its recruiters can show up in Muslim communities and promise people protection and security. This modus operandi was typical of how they took over so much of Sunni Iraq. They had been hitting Shiites with terrorist attacks and provoking Shiites to lash out at Sunnis.

Britain, a country of 65 million, has some 3 million Muslims, and it would be a very, very bad mistake to fall into ISIL’s trap.

ISIL and other extremists want us to hate. The only proper response is instead to love.

ISIL and other extremists want us to lash out violently. The only proper response is nonviolence.

When ISIL attacks, people of Christian and Jewish heritage should find a Muslim and be spontaneously nice to them.

Studies show that Muslims in the West who attend mosque are much less likely ever to become radicals. Attacking mosque congregations is an attempt to undo that good work.

So we come to the question in my headline. Donald J. Trump is one of the chief dupes of ISIL strategy, and his election as president last November gave him a very loud megaphone with which to broadcast hate and polarization. He is aided in this by the worst person in the world, alt-Neo-Nazi Steve Bannon, the chief White House strategist, who is working toward Catholic-Muslim polarization of a sort some fear could lead to blood in the streets.

During his campaign, Trump whipped up irrational hatred of Muslims, which some call Islamophobia. He said “I think Islam hates us.” He announced that he wanted to ban Muslims from entering the United States.

After the London Bridge attack at the beginning of June, Trump tweeted that it vindicated his Muslim ban. It did no such thing, since you can’t blame all the Muslims in 6 countries for crimes committed by one or two people from that country. Besides, many acts of terrorism are committed by citizens, as was true of the one today.

Then Trump accused London mayor Sadiq Khan of playing down the seriousness of the attacks, as a person of Muslim heritage. The mayor in fact had simply said that there would be extra police on the streets of London and that the public should not be alarmed by their presence. Trump twisted his words to imply he wasn’t taking the attack seriously.

Trump has admirers in the fringe British Islamophobic groups, including in UKIP, and his demonization of all Muslims for the acts of a few has emboldened militant bigots on both sides of the Atlantic.

Trump and Bannon are not savvy, strong Western politicians bravely standing up to the threat of “radical Islamic terrorism.” They are behaving precisely as the radicals want. They are dupes.

And they are making other people dupes.

This polarization strategy, and the people that fall for it, leads to catastrophe, as we saw with ISIL in Iraq and Syria.

Don’t go down that path.