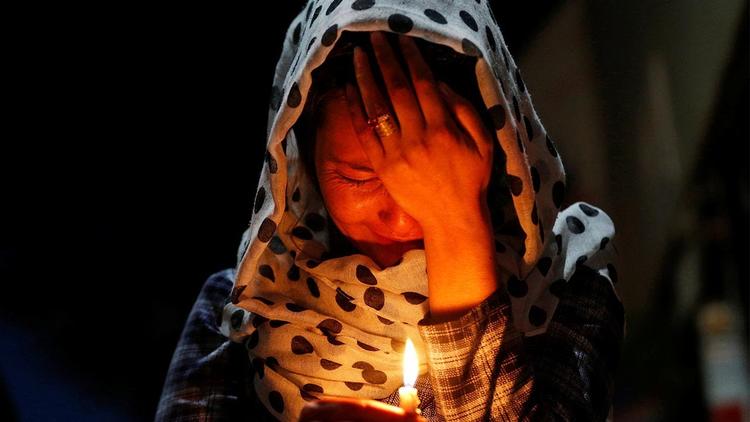 How did a sewage tank truck packed with explosives penetrate a heavily fortified area of the Afghan capital and carry out the deadliest attack in Kabul since the U.S.-led invasion in 2001?

That is the question angry Afghans want the government to answer, and provide some explanation for the security lapse that resulted in the deaths of at least 90 people and more than 400 wounded.

The May 31 explosion, whose casualties were mainly civilians, including women and children, occurred during the morning rush hour in the district known unofficially as the Green Zone, home to foreign embassies, NATO’s headquarters, and the presidential palace

A number of Kabul residents have accused the national-unity government of a major security and intelligence blunder. That has added to mounting pressure on the deeply divided and unpopular government of President Ashraf Ghani, which has faced criticism for its handling of the growing Taliban insurgency.

“For God’s sake, what kind of an interior minister and security chiefs do we have?” one Kabul resident who witnessed the attack said. “[Militants] come to the heart of Kabul and are able to carry out suicide bombings.”

The bombing followed a recent shakeup of security agencies, prompted by a wave of violence including the April 21 Taliban attack on a military compound in Balkh Province that killed over 140 army personnel.

The Kabul explosion occurred in Wazir Akbar Khan, considered one of the capital’s safest districts. Foreign embassies are protected by dozens of 3-meter-high blast walls and government offices are guarded by police and security forces.

The blast was so powerful it left a 4-meter crater in front of the German Embassy. Windows in buildings as far as 2 kilometers away were broken.

Another man, who said the explosion felt like an earthquake, told RFE/RL it was a clear failure by government officials.

“Officials sit safely in their offices and don’t ask what is going on here,” the man said, not wanting to give his name for security reasons. “What should we do in this situation? Should we run away from this country, or strap bombs to our bodies and blow ourselves up?”

There has been no claim of responsibility, though a series of attacks in the Afghan capital over the past year have been claimed by either the Taliban or Islamic State (IS) militants.

Kabul Province had the highest number of casualties in the country in the first three months of 2017.

The blast comes amid the ongoing spring offensive by the Taliban, and its fighters have been stepping up their push to defeat the U.S.-backed government. Taliban fighters now control or contest about 40 percent of the country, according to U.S. estimates, though Ghani’s government holds all provincial centers.

The bombing was a “horrific act of violence and a heartbreaking reminder of the toll that Afghan civilians continue to pay in a conflict where armed groups deliberately target them and the government fails to protect them,” Amnesty International said in a statement.

In March, gunmen dressed as medical staff attacked the 400-bed Sardar Daud Khan hospital and battled security forces for hours, killing more than 50 people and wounding dozens in an assault claimed by IS militants. The government was loudly criticized for what many Afghans saw as a serious security failure.

In July 2016, suicide bombers attacked a demonstration by members of the mainly Shi’ite Hazara minority in Kabul, killing 84 people and wounding more than 230. IS fighters claimed responsibility.

Those events led to an extensive overhaul of the security agencies.

Defense Minister Abdullah Habibi and Army Chief of Staff Qadam Shah Shahim resigned under pressure from the government after the Balkh attack. And after the IS attack on the Kabul military hospital in March, nine military officers, including a general and colonel, were dismissed.

Several of the officers dismissed over the Balkh attack also face prosecution for negligence.

Ghani has also fired dozens of officials from the Interior and Defense ministries and replaced army corps commanders across the country.

“The government changes some ministers or sacks some commanders,” another Kabul man told RFE/RL. “But nothing changes and the civilians are the ones paying the price.”