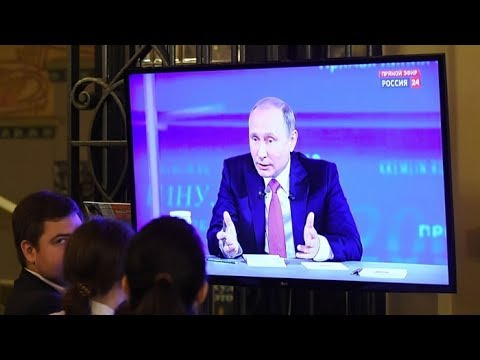 The Syrian press is watching Oliver Stone’s interview with Russian President Vladimir Putin and likes what it sees. Syria’s al-Watan (The Nation) reports that Putin’s Syria policy is the complete restoration of central government authority over the entire country, in preparation for a pull-back of Russian military forces to the Humaymin Air Base and Tartus on the Mediterranean.

He doesn’t appear to envisage that the Syrian military is capable, however, of taking all the country’s territory back, no matter how much air support Russia gives. Instead he sees a negotiation process, helped along by outside players such as the United States, Iran, Egypt, and Turkey willing to negotiate at Astana, Kazakhstan. He says he is asking them for “constructive cooperation.”

Putin believes that all the major players can agree that terrorism must be stopped.

Putin admits the need for “dialogue” between the opposition and the regime, including the armed opposition. (If Putin is sincere about this, he should be aware that Bashar al-Assad has repeatedly refused to talk to armed rebels, dismissing them as terrorists.)

Asked if it is necessary to partition Syria to resolve its crisis, Putin strongly disagreed and argued for the necessity of maintaining the territorial integrity of Syria and attaining a resolution of the various conflicts going on in the country.

He points out that partitioning Syria might only result in the mini-states fighting wars with one another.

Putin said that Russia was willing to support those Sunni rebel groups that fought ISIL (Daesh, ISIS) and the Nusra Front (the Syrian al-Qaeda affiliate). He revealed that al-Assad is OK with that.

The end game, Putin says, will be the drafting of a new constitution and the holding of new presidential elections under watchful international supervision, as soon as possible.

In the meantime, in his phoner with the press on Thursday, Putin gave some less noble reasons for his involvement in the Syrian war, according to BBC Monitoring:

“The experience that the Russian military have gained in Syria is priceless, President Vladimir Putin said, speaking at his annual phone-in as shown live on official state TV Rossiya 1 on 15 June.

“We can say that the experience of using our Armed Forces in combat while employing modern weapons is absolutely priceless, I am saying this without any exaggeration. You know, our forces have even gained an absolutely different quality,” Putin said.

Combat experience also gave a chance to military engineers to test and tune the weapons on site, he added.”

That sounds about right. The Russian military-industrial complex isn’t less than anyone else’s.