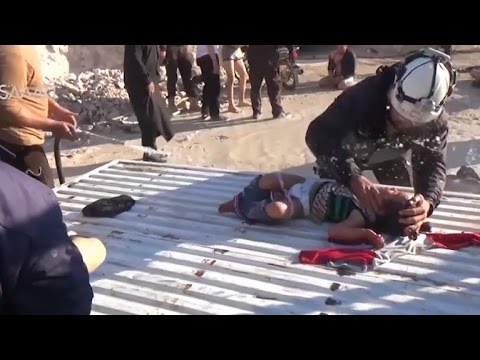 The unusual statement from the “White House” on Monday saying that there were indications that the Syrian regime was preparing to use poison gas has provoked much head-scratching both inside the Trump administration and around the world. Why would the “White House” say this? Is it preparing the way for another missile strike on a Syrian military target? Why? Who? It is sort of like a sordid murder in a pulp mystery novel. Who had means, motive and opportunity?

It should be said that the Russian pundits can be forgiven for being confused. Trump’s statement apparently came as a huge shock to the Department of Defense and senior officers in the military and also to the State Department.

Although the top, more political levels of the Department of Defense swung into action to support the White House charge, apparently the officers who would have known if the allegation had been true were taken by surprise.

Who at the White House put this meme out? It wasn’t Trump, since he would have tweeted, and he hasn’t said anything about it. Apparently Jared Kushner is in actual charge of foreign policy, so maybe it is he. Kushner is alleged to be behind Trump’s support for Saudi Arabia and the United Arab Emirates in their kerfuffle with Qatar, to the extreme annoyance of Secretary of State Rex Tillerson and Secretary of Defense Jim Mattis. Tillerson has about had it with the White House insiders who keep over-ruling him and frankly humiliating him, and is said to have exploded at them on Friday, with Reince Priebus and Jared Kushner in the room.

Then it was alleged yesterday that the late-Monday White House announcement had already deterred Syria from use of poison gas. . The ghost ended up haunting itself.

As for the Russian press, BBC Monitoring has a round up.

The popular Moskovsky Komsomolets suspects that Trump is gearing up for another missile strike on the al-Assad regime. It says that such interference by the US will just prolong the civil war in Syria. Hitting the regime, the paper says, would show that the US doesn’t actually care about terrorism, but is committed to regime change. Boris Dolgov is quoted with some further speculation. The US, he says, wants to get rid of al-Assad and thus deprive Russia of a key ally in the Middle East. The added bonus for Washington, he alleged, was that once the Syrian regime collapses, radical Muslim fundamentalists will sweep into power in Damascus and then pursue terrorism against Russia in the Caucasus, as among the Chechens.

The centrist Nezavisimaya Gazeta said that Russian experts doubt that Trump is planning another strike on Syria. It worries, though, that Iran may encourage the al-Assad forces to use gas. This action would in turn result in a US strike, which would sour relations between Russia and Trump and so forestall a US-Russia rapprochement. Tehran, it implies, prefers that the superpowers be at odds with one another and is conniving at that outcome.

So there you have it. The whole thing is an American plot to hand Syria to al-Qaeda, expel Russia from the Middle East, and embroil the Russian Federation in massive and debilitating terrorist attacks by Muslim radicals encouraged behind the scenes by the USA. That’s dark.

Or, Trump is being successfully trolled by a Machiavellian Iran conniving to keep tensions high between Washington and Moscow, so that Iran remains a valuable asset to Russia.

Needless to say, none of these allegations is true. The main force backed by the US in Syria at the moment is leftist Kurds, not al-Qaeda in Syria (The “Syrian Conquest Front”). There is no reason to think the US wants radical extremists to take over Syria or wants them to destabilize Russia. Well, the Neocons might want that, but they are to say the least not in power.

Iran has a moral objection to the use of gas and is certainly not encouraging al-Assad in that direction (Iranian troops suffered from Saddam Hussein’s gas attacks in the 1980s). Indeed, the Iranian opposition blames the ruling ayatollahs for their shameful support of the secular, dictatorial Baath regime in Syria, in general, and many Iranians consider it a national humiliation, given the ideals of the 1979 revolution. On the other hand, it is true that Iran is afraid that Trump will steal Putin from them.

So, I conclude that nobody has the slightest idea what is going on here, but a lot of people are afraid it could lead to dire consequences.