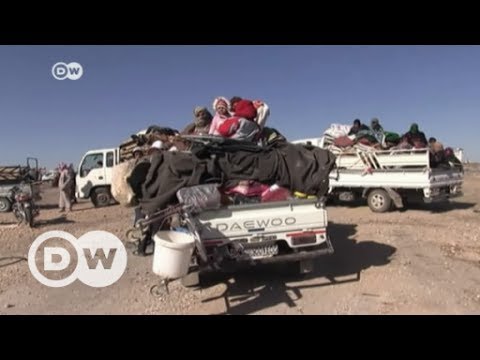 Whatever the fate of the world, Eliot’s verse is appropriate to the phony “caliphate” of Abu Bakr al-Baghdadi, leader of ISIL (ISIS, Daesh). Its last days as a territorial mini-state will play out through 2017, but even dramatic developments appear not to be generating much public interest.

The Syrian Democratic Forces (SDF) announced Saturday morning that they had established control over a northwestern neighborhood of Raqqa in Syria, the capital of Daesh. They also launched an attack on a military base north of the city.

There are reports that Daesh fighters in Raqqa are attempting to negotiate their departure from the city.

The SDF is mostly made up of the leftist Kurds of the YPG (People’s Protection Units). To it are attached a few northern Syrian Arab clans, though the number of Arabs in the SDF is likely greatly exaggerated. Rebranding the YPG as the SDF and trying to make it multi-cultural was the strategy of Barack Obama and his secretary of defense, Ash Carter. They embedded a few hundred US special operations troops with the YPG and began training and equipping them for an eventual assault on Raqqa. The leftist Kurds were happy to take on this task in alliance with the US because Daesh had been trying to take their territory and massacre them, as they had done to the Iraqi Kurds. As leftist Kurds they are the ideological opposite of the hyper-fundamentalist, largely Arab Daesh.

Secretary of Defense Jim Mattis studied the Obama/ Ash Carter strategy intensively. Likely Mattis got enormous pressure from Trump’s first National Security Adviser, Mike Flynn, to drop the Kurds. (Flynn was secretly working for a billionaire close to Turkish president Tayyip Erdogan and appears to have been in Ankara’s back pocket; and Ankara does not like Washington’s Kurdish strategy toward Daesh one little bit.). Still, in the end, Mattis decided to go forward with the strategy of his predecessors, with some minor tweaks, He increased the number of US Special Operations troops embedded with the Kurds somewhat, and he supplied the YPG with medium weaponry, over squawks from Turkey. And his Pentagon redoubled regional propaganda exaggerating the number of Arab tribal levies fighting alongside the Kurds in the “Syrian Democratic Forces.”

And now the SDF is bracing the “caliphate” in its own lair. That a key neighborhood of Raqqa has fallen is huge news. It is the second to be taken by the SDF, the first having been al-Sabahiya.

It is true that the Syrian province of Deir al-Zor remains to be taken even if Raqqa province falls. And that Daesh may hang on for a few more months in West Mosul. But given Daesh’s designation of Raqqa as a capital and given the fixation on north Syria as the site of a future apocalyptic battle (which it will now never be in a position to join), the morale implications of the Raqqa defeat for the minions of Daesh are enormous.

The northern approaches of the city (most Kurdish YPG forces are north of Raqqa) are guarded by the “Division 17” army base, which was captured by Daesh in 2014. The Kurdish fighters are finding the assault on it slow going.

The SDF began its campaign in Raqqa province last November, gradually moving south and cutting off major supply routes to the Daesh capital.

The American public was so consumed in 2014 with Daesh and its sanguinary spectacles that it did an about-face and wanted then President Barack Obama to intervene in Iraq, despite their support for him in 2008 and 2012 having been premised in part on his opposition to . . . intervening in Iraq.

When Daesh took much of eastern Syria and northern and western Iraq in 2013-2014, it presented to then President Barack Obama perhaps his gravest foreign policy crisis. Despite how badly he wanted not to be bogged down in Middle East policy, he swung into action. He forced pugnacious Shiite nationalist Nouri al-Maliki out of office in Baghdad and helped usher in the more flexible Haydar al-Abadi. He rebuilt the Iraqi command in a bid to train up yet another Iraqi army to replace the one that collapsed and ran away from Daesh in June of 2014. He tacitly accepted the help of Iran and of pro-Iranian Shiite militias in the fight against Daesh in the meantime.

On the Syria side, he was rebuffed in his search for a regional land force that would take on Daesh in Raqqa and Deir al-Zor, where it was ensconced. Turkey was much more interested in taking on the PKK Kurds. The Gulf Cooperation Council nations offered their air forces to do some bombing in northern Iraq, but I don’t think they ever helped out against Raqqa in Syria.

It is Obama’s policy toward Daesh that is now finally bearing fruit. That policy may have been slower than desirable (certainly for the sake of Paris and Brussels). But it was eminently practical, and is now finally being implemented.