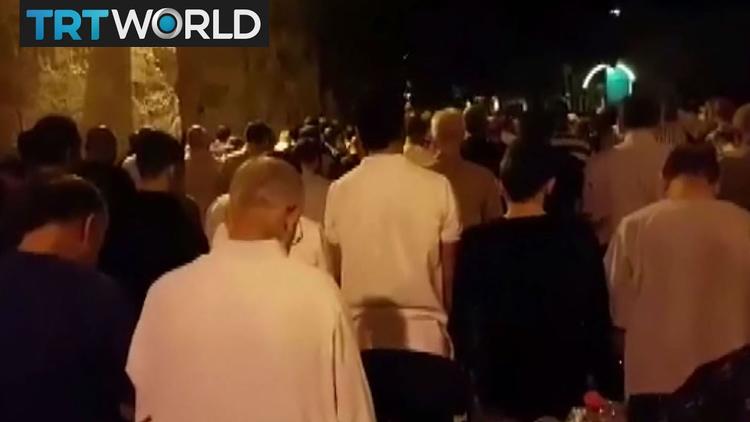 No conflict in the Middle East spares the Palestinians, and the recent crisis in the GCC is no exception.

Following the escalation of the GCC crisis and the deteriorating relationship between Qatar and the Gulf Triad (Saudi Arabia, the UAE and Bahrain), along with Egypt, rumors started spreading about a possible deal with the Hamas leadership in Gaza, being orchestrated by Egypt and the UAE. It would seem that the current crisis and its impact on Hamas has been viewed as a golden opportunity to reshape Palestinian politics and possibly curb the Hamas link to the Muslim Brotherhood and Qatar.

According to Reuters, there have been talks between Hamas leaders, such as Yahya Sinwar, and Egyptian officials about the future of leadership in Gaza. Hamas has been negotiating the easing of the blockade and securing fuel supplies with Egypt on the condition that Hamas includes Mohammad Dahlan in the Gaza leadership. However, the expected scope of his potential role within the government is not clear.

Reports claim that the Palestinian leadership in Ramallah was initially happy about the recent crisis in the GCC, and the consequent implications it has on Gaza; however, the leadership is now reconsidering its stance as it sees the possible return of Mohammad Dahlan to the scene as a threat to the current status quo in the West Bank. The decision of Mahmoud Abbas to pressure Hamas by cutting the salaries of public servants in Gaza as well as cutting down the electricity supply seems to have backfired with Egypt and Dahlan emerging as the unlikely saviors for Hamas.

These rumors that might have sounded far-fetched a couple of months ago, no longer seem to be unthinkable. The difficult situation Hamas currently finds itself in, makes these claims much more plausible. For one thing, it has been reported that multiple Hamas leaders have left Qatar, and the decision by Ismail Haniyeh to relocate to Qatar has been retracted. Nevertheless, it may be argued that it was in fact Qatar that sought to distance itself from Hamas due to the current GCC crisis. Whether this shift was initiated by Qatar or Hamas, or whether these changes preceded the GCC crisis, or came as a result of it, remain the subject of a larger investigation. However, the end result for Hamas remains that is has been put in a difficult position as it seems to be losing its Qatari ally, while at the same time being put under intense pressure by Israel and the Palestinian Authorities, whose actions seem to be driving Gaza towards a catastrophic reality.

More importantly, the recent meeting that took place between Egyptian Intelligence and Hamas leaders indicates a high possibility that the alleged deals are being made. What makes it even more so is the fact that Hamas has recently decided to increase security on the borders with Egypt in Sinai by putting up a buffer zone; a request that fell on deaf ears when made by Egypt in the past. Egypt, on the other hand, suddenly decided to supply the Gaza strip with much-needed fuel supplies following the decision by Israel, under the pressure of the PA, to cut the electricity supply. Could this be the Hamas leadership and Egypt’s way of showcasing their good intentions and willingness to cooperate on the new vision for the Gaza strip? In light of this, it seems more likely than ever that Hamas will take the hand that was extended to it by Al-Sisi’s government, and Dahlan, even if both parties may be highly disliked by the movement.

For one thing, it seems that the PA has been completely sidelined in these negotiations. It is no secret that Dahlan, who aspires to be the successor of Abbas, has fallen out of favor with the PA in 2011 and has been described as the archenemy of Abbas. With the PA constantly cracking down on the supporters of Dahlan, it has become increasingly clear that a return to the PA is unlikely for him. In turn, it is entirely possible that the future of Gaza is one that distances itself from the West Bank rather than seeks a form of unity. In fact, isn’t it possible that the negotiations with Egypt could lead to the complete separation of Gaza from the West bank? As Egypt starts to supply the Strip with its needs and opens the Egyptian-controlled Rafah crossing with Gaza, what will be the possible scope of cooperation between the West Bank and Gaza?

With a lot of speculation going around, there is not much room for certainty. It may be clear, however, that with the Dahlan-Hamas alliance in Gaza, and Abbas’ Fatah in the West Bank, it seems less likely than ever for the two parties to achieve a unified government let alone be able to negotiate the establishment of a Palestinian state based on the 1967 borders. As such, what seems to be the only move currently available for Hamas is one that further divides the Palestinians and further compromises the relationship between the two territories.

If this plan is to actualize, it is also difficult to see the relationship that might bring together Hamas and Dahlan. The latter has been viewed by many as a corrupt figure in Palestinian politics, and a strong supporter of American and Israeli interests. It is also difficult to ignore the past animosity that existed between the two sides, which intensified during the violent clashes of 2007. Is it possible for the two sides to find a middle ground or is this alliance meant to be short-lived?

At the end, the question that presents itself is whether this move will set the Palestinians and their aspirations for an independent Palestinian state on another trajectory, which will be difficult to escape. If the Palestinian front is divided and the negotiation process is further halted, how will this impact the expanding settlement building projects of Israel in the West Bank and East Jerusalem? If this is a foreseeable future, then will it ever be possible for the Palestinians to reverse the damage created by this rift within its ranks? Or is the future of the Palestinians one that sees Gaza returning to Egypt and the West Bank annexed by Israel? If anything, one thing is clear: Israel will continue to be the biggest beneficiary from the internal Palestinian dispute.

Israa Khater holds a dual master’s degree in Public Policy from the University of York and Erasmus University. She completed her undergraduate education at the American University of Sharjah obtaining a Bachelor’s of Arts in International Relations. She focuses her research interest on the Palestinian question and the wider MENA region. She completed her master’s thesis on the topic of Palestinian civic engagement and the boycott movement.  Currently, she works in the humanitarian sector.