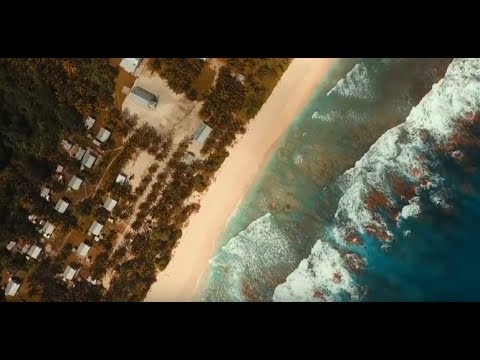 An aerial view of the Village of Kolhuvaariyaafushi, Mulaaku Atoll, the Maldives, after the Indian Ocean Tsunami. Credit: UN Photo/Evan Schneider

UNITED NATIONS, Jul 26 2017 (IPS) – The Maldives, one of the world’s low-lying, small island developing states (SIDS) — threatened with extinction because of a sea-level rise– is shoring up its coastal defences in anticipation of the impending calamity.

And it is seeking international support for its very survival.—at a time when most Western nations are either cutting down on development aid or diverting funds to boost domestic security.

“The danger of sea level rise is very real and threatens not just the Maldives and other low-lying nations, but also major coastal cities like New York and Miami,” Ambassador Ahmed Sareer, the outgoing Permanent Representative of the Maldives, told IPS.

Sareer, who held the chairmanship of the Alliance of Small Island States (AOSIS) for over two years, said that even though projections vary, scientists anticipate at least three feet of sea level rise by the end of the century.

“This would be problematic for the Maldives, SIDS and many other coastal regions. We are currently building coastal defences to mitigate the danger, but need more support,” said Sareer, currently Foreign Secretary of the Maldives.

Along with Maldives, there are several low lying UN member states who are in danger of disappearing from the face of the earth, including the Marshall Islands, Kiribati, Nauru, Solomon Islands, Tuvalu, Palau and Micronesia.

Asked if the United Nations and the international community were doing enough to help alleviate low-lying small island states, Sareer told IPS: “There has been a heightened focus on the risks SIDS face in recent years, not just from climate change but economic challenges as well. We are grateful for the progress, of course, but it is fair to say we still have much further to go.”

Beginning July 31, the Columbia Broadcast System (CBS), one of the major US television networks, is planning to do a series of stories on “Sinking Islands” threatened by rising sea levels triggered by climate change.

Described as “one of the world’s most geographically dispersed countries” and comprising more than a thousand coral islands scattered across the Indian Ocean, the Maldives has a population of over 390,000 people compared to India, one of its neighbours, with a hefty population of over 1.2 billion.

The island nation was devastated by the December 2004 tsunami, and according to one report, 57 islands faced serious damage to critical infrastructure, 14 had to be totally evacuated, and six islands were destroyed. A further twenty-one resort islands were forced to close because of tsunami damage estimated at over $400 million.

As part of its defences, the Maldives has been erecting a wall around the capital of Malé to thwart a rising sea and a future tsumani.

Meanwhile, in a dramatic publicity gimmick back in October 2009, former Maldivian President Mohamed Nasheed held an underwater cabinet meeting, with ministers in scuba diving gear, to highlight the threat of global warming.

And earlier, at a Commonwealth Heads of Government (CHOGM) meeting in Kuala Lumpur in October 1989, then Maldivian President Maumoon Abdul Gayoom told delegates that if his country is to host the annual meeting in the foreseeable future, the meeting may have to be held underwater in a gradually disappearing island nation.

The World Bank has warned that with “future sea levels projected to increase in the range of 10 to 100 centimeters by the year 2100, the entire country could be submerged”.

But still, the Maldives which graduated from the status of a least developed country (LDC) to that of a developing nation in 2011, is very much alive – and currently campaigning for a two-year non-permanent seat in the most powerful body at the United Nations: the 15-member Security Council.

This is the first time in its 51 years of UN Membership that the Maldives has presented its candidacy for a seat in the UN Security Council (UNSC).

Over the past 25 years, only six SIDS have served on the Council, out of the 125 elected members during that period. SIDS constitutes 20% of the UN Membership.

Since January 2015, the Maldives has chaired the Alliance of Small Island States (AOSIS), a group it helped form in 1990, leading a coalition of 39 member states, of which 37 are UN Members, through landmark agreements on sustainable development, climate change, disaster risk reduction, financing for development, sustainable urbanization, and the follow-up to the SAMOA Pathway- the sustainable development programme of action for SIDS.

In a long-planned effort, the Maldives put forward its candidature on 30 January 2008: ten years before the election, which will take place next year in the 193-member UN General Assembly which will vote for new, rotating non-permanent members of the UNSC.

Sareer said the Maldives seeks to bring a fresh and unique perspective to old challenges.”

Despite its size, he said, the Maldives has always punched above its weight on the international stage. And it has been a staunch advocate for climate change, and a champion of small States.

Sri Lanka’s former Permanent Representative to the UN Ambassador Palitha Kohona told IPS Maldives has a commendable mission to realise – to push for action on climate change through the Security Council.

This, though a laudable aspiration, will be an uphill battle given that a powerful Permanent Member of the UNSC (the United States) is a declared opponent of the majority global view on climate change, having recently pulled out of the Paris Accord. It will also run in to opposition from the fossil fuel lobby.

However, if elected to the UNSC, Maldives is likely to enjoy the sympathy of the vast majority of the membership of the UN, including those who initiated a movement to seek an advisory opinion in the International Court of Justice (ICJ) on responsibility for global warming and climate change in 2012, said Kohona, who co-chaired the UN Working Group on Biological Diversity Beyond National Jurisdiction and is a former Chief of the UN Treaty Section.

“It will need to deploy considerable resources to secure a seat and then to realise its goal
because Security Council elections, unfortunately, have become a competition among aspirants to see who can spend most on entertaining, junkets and obligatory visits to capitals. These ‘poojas’ become bigger and bigger by the year,” said Kohona.

He said Maldives will be a trend setter for small island developing states, which also must be able to play a role in the UNSC. “They have concerns of global import. It is unsatisfactory in every sense for the UNSC to increasingly become a preserve of big and the powerful.”

He also pointed out that Maldives is well placed and eminently qualified to raise awareness on climate change, global warming and sea level rise. These are threats to the very existence of humanity and could very well morph in to threats to global peace and security.

Already the flood of refugees is having a destabilizing effect on Europe. Refugee flows, which could be massive, resulting from climate change would pose a greater threat to global peace and stability requiring UNSC action. Such action could be taken preemptively rather than after the catastrophe has occurred, he noted.

“Seeing our loyal friend and neighbour seeking a non permanent Security Council seat should also encourage Sri Lanka to do the same in the not-too-distant future,” he added.

Asked whether the 2016 Paris Climate Change Agreement reflected the fears expressed by SIDS on sea level rise, Sareer said sea level rise is just one of the many impacts of climate change, which are of significance to SIDS.

“The Paris Agreement’s main objective is to enhance climate actions, and hence doesn’t directly address sea level rise. However it did include a strong temperature goal and a stand-alone article on loss and damage, which indirectly address these concerns. What is important now is for countries to make deep cuts in their emissions immediately.”

Asked whether the Maldives expects funding from the multi-billion dollar Green Climate Fund (GCF), he said: “We do. The GCF is a primary multilateral vehicle to deliver climate financing to developing countries and therefore ramping up support for the GCF will be critical for all vulnerable countries.”

However, other funds under the UN Framework Convention on Climate Change (UNFCCC) are also crucial for transforming climate action in SIDS and also in developing countries.

He said changing rainfall patterns and increasing salinization caused by rising sea levels have led to challenges in securing reliable supplies of drinking water in many Small Island Developing States.

In this context, the Maldives submitted one of the first projects approved through the GCF which will see almost a third of the population of the Maldives becoming freshwater self-sufficient over the next five years.