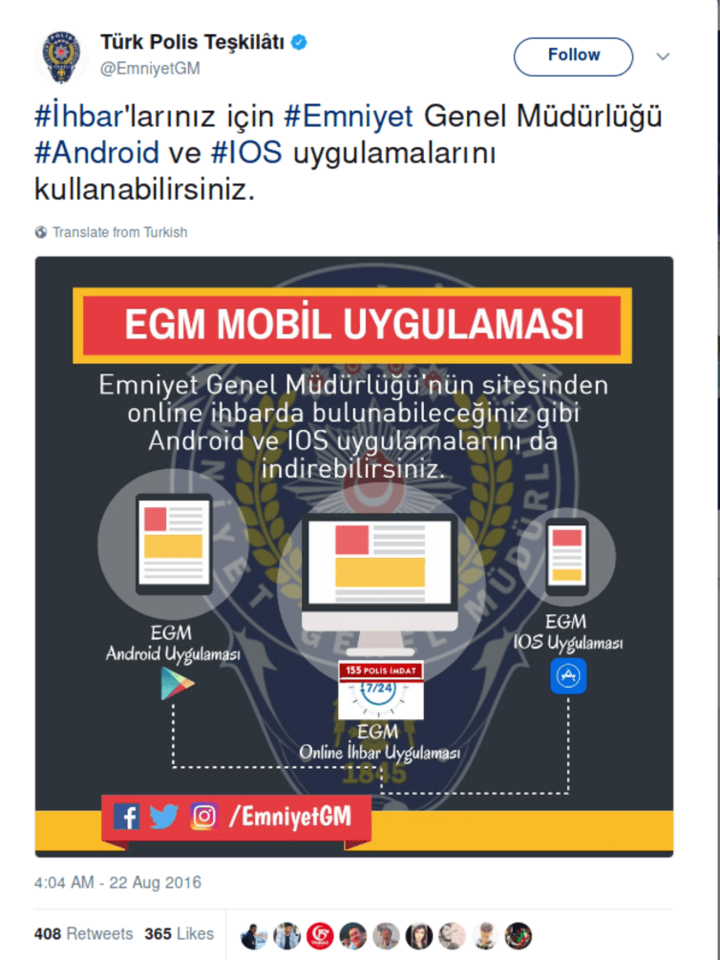 On July 4, Eren Aksoyoğlu, a member of the Turkish Joint June Movement opposition bloc, was taken into custody for a tweet criticising the government’s handling of a racially-motivated brawl in Ankara.

Previously, fashion designer Barbaros Şansal was briefly jailed for “inciting hatred” after tweeting a video. Social media screenshots are routinely used as “evidence” in lawsuits against Kurdish journalists, such as Ali Barış Kurt, who was sentenced recently to 28 months in prison.

Twitter has become a scary place for Turkish users, landing many who disagree with the current government straight in jail. Although frequent bans by the Erdoğan government have failed to keep residents off the platform, the intimidation is getting more serious.

Since the coup attempt one year ago, which was blamed on a one-time Erdoğan ally, cleric Fetullah Gülen, Turkish police have started encouraging internet users to inform on others. In December 2016, Akşam, a newspaper owned by Ethem Sancak, a functionary in Erdoğan’s Justice and Development Party (AKP), announced hotline apps and accounts launched by the police.

According to the independent news website Diken, as of July 2017 seven people a day are taken into custody because of the content they share on social media. Small-scale data collection that I carried out for this article using the GetOldTweets software returned more than 3,500 tweets reporting a user to the police.

Turkey leads Twitter comfortably in all categories of removal requests, according to Twitter’s Transparency Report. Most alarming are court-ordered requests, in which Turkey outnumbers its closest competitor, Brazil, by 811 instances – at 844 to 33.

While the Turkish government has previously tried to censor tweets through court orders, calling for denunciation by citizens is new and chilling.

It’s difficult to imagine these days that Twitter was once a thriving place for free expression in Turkey. For many Turkish speakers, Twitter is a “grey market” news source, able to fill in the blanks left by mainstream media.

Around 6.5 million Turks are estimated to use Twitter, according to 2015 data. Though this number pales in comparison to 46 million Turkish Facebook users, Twitter has proved its worth repeatedly as a news source and political communication tool.

Twitter’s rise started after the 2010 constitutional referendum when Erdoğan’s AKP, together with then-allies Gülenists, eliminated its secular rivals in the civil-military bureaucracy.

By the following year, Erdoğan was instructing mainstream media bosses on how to cover “news on terror”, his term for clashes between the Turkish army and Kurdish guerrillas.

In December 2011, the Turkish air force killed 34 Kurdish civilians near the Iraqi border. But the news was not covered by mainstream media until the next day when the Turkish general staff claimed responsibility for the airstrike.

Meanwhile, tweeting under the hashtag #twitterkurds, Kurdish sources released the details of the killings and managed to push the incident into public view. The incident became one of the first examples of “not covering the news until the government says so”.

A voice for the silenced ones

Soon, other silenced groups, such as leftists, environmentalists, and even Kemalists started to use Twitter. In June 2013, Turkish Twitter made a giant leap with the Gezi Protests , which began as an environmentalist action in Istanbul and turned into a millions-strong movement.

As it became apparent that mainstream media would not cover the protests and the associated police violence, the number of users and tweets sent from Turkey quadrupled, reaching 25 million and 2.5 million users by June 1.

For his part, Erdoğan, who had previously dismissed Twitter as “chit chat”, announced that it was the “worst menace to society”.

To counter anti-government tweets, he hired thousands of pro-AKP Twitter users, but to no avail. Erdoğan’s base was still most present on Facebook, while Twitter attracted young, urban, secular users (in part because its platform was not available in Turkish language until 2011).

By the 2014 local elections, Erdoğan, himself under investigation for alleged corruption after accusations by Gülenists and others, vowed to “eradicate Twitter”. The first block to Twitter came almost simultaneously.

Since then, Twitter has been so frequently blocked by the regime’s telecom authority that Turks have come to expect a blackout after almost every event that could generate anti-government feeling: bombings, disasters, scandals.

Pressure increased again following the 2016 coup attempt. Since Erdoğan became president in 2014 after 11 years as prime minister, Article 299 of the Turkish Penal Code has often been used to stifle dissent.

After the attempted coup, this statute, which forbids insulting the president, has been coupled with terror charges. The result is often a serious prison sentence.

Since the Gezi Park protests, the AKP has cultivated a band of so-called “AK Trolls,” who have caused discomfort even within the party. And many are still around.

They continue to amplify hashtag campaigns in support of the government and contribute to the complaints against individual Twitter users. Their presence, combined with the AKP’s zealous chase of online opponents for “terrorism” punishment, has made Turkish Twitter a truly dangerous place.

On the Internet, the saying goes, nobody knows you are a dog. But in today’s Turkey, where journalists, lawyers, human rights defenders and academics can be declared terrorists arbitrarily, you may still find yourself chained.