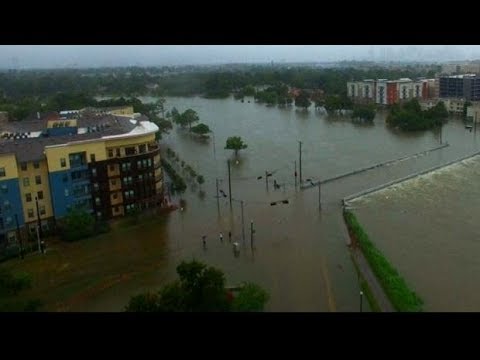 The whole Trump administration should resign in shame, since they have lied to the American people about the disaster of burning fossil fuels.

The policies of climate change denial made Hurricane Harvey far worse than it would ordinarily have been, some scientists say by as much as 30%. If the US had started a crash program to curb emissions back in the 1970s when Exxon Mobil scientists confirmed the dangers of carbon dioxide emissions, which lead to global heating, the once in a 500-year year storm might not have been nearly as severe.

Who led the charge in denying manmade climate change and trying to muddy the waters about the menace of burning fossil fuels?

Where is Exxon Mobil?

The HQ is in Dallas and there is a big new state of the art campus in Houston. (The web page for it mentions “sustainability” but ExxonMobil is a master of greenwashing. Only about 1% of their research budget goes to renewables and almost everything they do involves finding, producing and selling petroleum, the burning of which in automobiles causes global heating.). In other words, Exxon Mobil is fouling its own nest and it expects you and me to pay for it.

And who was the head of Exxon Mobil?

Secretary of State Rex Tillerson. Tillerson may as well have been down on the shore scooping buckets of water from the sea and throwing them on Houston.

A new study shows that Exxon Mobil went to enormous trouble to deny climate change from 1977 right until today.

Tillerson, while CEO of Exxon Mobil, maintained a special email address for discussing climate change, under the name of “Wayne Tracker.”

Trump himself attempted to make climate change look like a Chinese plot.

The Environmental Protection Agency head Scott Pruitt is closing down the EPA for all practical purposes, leaving the rest of us open to being poisoned by amoral corporations. One of the poisons Pruitt is plotting to unleash on us is vastly increased carbon dioxide emissions.

Rick Perry was governor of Texas and he encouraged gas and oil interests and put billions of tons of carbon dioxide into the atmosphere, which has now returned in the form of Harvey to bite his state in the ass. His Energy Department just instructed a scientist to take out mention of climate change from an application to the department for funding.

This is not an administration, it is a rogues gallery of environmental criminals.

Want to know why we’re having a once in a 500 years storm and flood in Texas?

Because of Trump and his buddies on the cabinet. They are creating a situation where Hurricane Harvey becomes the new normal.