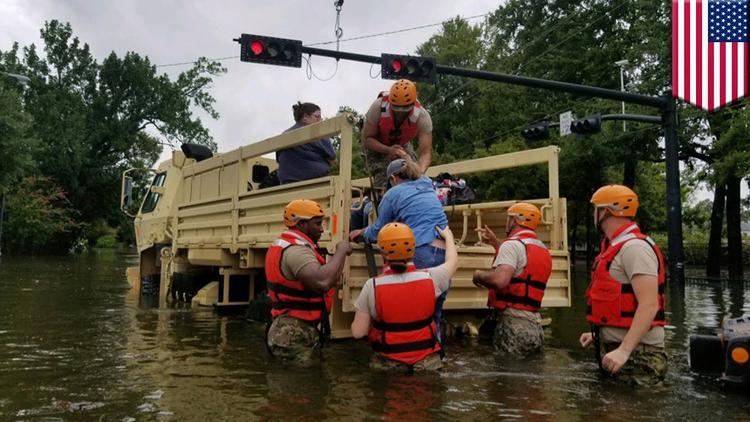 As parts of eastern Texas go underwater, the scenes of people fleeing for their lives are gut-wrenching. One picture of nursing home residents in waist-deep water took my breath away; fortunately, they did get rescued and are now safely placed in a new facility. Watching the news coverage has made me wonder when this low-lying region will be safely habitable again. Officials say that it will take years for the area to recover..

These Houstonians and others affected by Harvey may become the newest version of climate refugees (also known as environmental migrants.) It is impossible to deny that climate change had increased the severity of Harvey, since the warmer water temperatures and higher sea level were factors. Unfortunately, not every evacuee may be able to return home in the near future. One troubling question is how much of the land will be washed away from this unprecedented event. Oil refineries and Superfund sites will probably pollute the region to such a high level of toxicity that the land may not be safe for human habitation for years. How many Texans and Louisianans will have to relocate within the U.S.?

The term “climate refugee,” then, applies to the Harvey crisis not only because of climate change but the need to flee one’s home. Although the international community still limits refugee status as related only to war and persecution, I believe that climate events should also be included. Technically, the term “migrant” is correct but I think that it understates the urgency of the situation and implies that the departure was voluntary—but a refugee has to run for their life.

If the Harvey storm victims do become climate refugees, they will not be the first U.S. citizens to face this trauma. The others, though, have more time to prepare for their departure. In 2016, the residents of Isle de Jean Charles, Louisiana were granted federal money to find new homes before the recurrent flooding grew even worse. These climate refugees will probably be joined by other Louisiana residents in the near future, since the state has been recording a high rate of land loss.

Other climate refugees in the U.S. are the indigenous people of Alaska, who have been trying for years to survive in a state that has become much warmer than the lower 48 states. According to the Fish and Wildlife Service, permafrost thawing and melting glaciers are threatening the ecological balance. The sea ice, once deep enough for humans to walk on without hesitation, has become treacherously thin. Lakes are drying up, with the fish and other subsistence foods not being enough to sustain the indigenous people. Because of erosion and flooding, several tribal communities have started the process of relocating.

According to the Environmental Justice Foundation, there will be up to 150 million climate refugees by 2050. Although this estimate is disputed, the realities of the mass migration due to climate change are dire. Many experts consider Bangladesh, for example, as the most vulnerable nation due to cyclones and flooding. Meanwhile, Pacific islands such as Kiribati and Tuvalu are gradually sinking into the ocean and relocation is the populations’ only option.

For a Houstonian trapped on a roof and being rescued by a helicopter, these broader considerations may not seem relevant to their situation. However, these flood victims also share similarities with war refugees. Like the refugees from Syria escaping war, the Harvey evacuees do not want to leave their homes. Many refugees, whether fleeing bombs or flood waters, have to flee with little or nothing. The Harvey evacuees have to depend on the kindness of strangers, which can be humiliating and stressful even in the best of circumstances.

All refugees deserve our respect. In the recent months, the word “refugee” became associated with terrorists and other undesirable people. The true meaning of the word, though, is somebody seeking refuge from harm and even death. This week’s tragic events in Texas remind me of the Ice Storm of 1998 in Maine, when three-quarters of the state lost their power in the middle of winter. I was one of the lucky ones who did not have to move into shelters to avoid the life-threatening cold. As a volunteer working with Bosnian refugees, I realized that the Mainers’ brief experiences of being homeless and needing emergency assistance could be a lesson in empathy with refugees. Right now we are still in the middle of the Harvey crisis, so we must concentrate on the victims’ survival and well-being. After the crisis is over, though, I sincerely hope that Americans will recognize how climate refugees share the same dilemma as war refugees—they were displaced by a catastrophe that was beyond their control, and deserve our embrace and support.