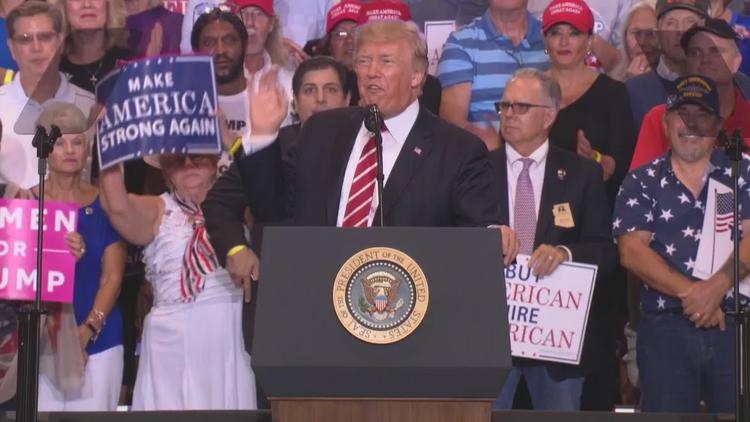 After another Stockholm Syndrome performance, on Afghanistan, where he gave the speech National Security Adviser H. R. McMaster wrote for him, Trump on Tuesday returned to form at a rally in Phoenix, Arizona.

It was a week and a half after Trump discredited himself with two-thirds of the public by saying that the Nazi/Klan invasion of Charlottesville was a problem with “many sides.” It was a week after he said that there were very fine people among the invaders, who killed one young woman, beat a young black man to within an inch of his life, put at least 19 other people in the hospital, and menaced a synagogue and churches.

Despite having upset so much of the country by defending racists and equating them with civic-minded protesters, Trump insisted on going to Phoenix to push his anti-immigrant agenda. In a long, rambling speech full of falsehoods, Trump again equated immigrants with criminals and blamed them for joblessness among whites.

Thousands of protesters took to the streets peacefully to condemn Trump’s comments on Charlottesville. Over 50 people had to be treated for heat-related health problems in the 106 degrees F. weather. In the evening, the police abruptly unleashed tear gas on the crowd, dispersing what was left of it.

Trump again asserted incorrectly that his administration had passed a record amount of legislation. He said he had won Arizona “by a lot.” He won by a low 3.5% (Bush won over Kerry in 2004 in Arizona with a 10.5% margin). His supporters keep saying he is responsible for 1 million jobs added to the economy since January (it is actually a little over 600,000), neglecting to note that that is the smallest number for the first two quarters of any recent year.

If Barack Obama was sardonically referred to as the nation’s “Magical Negro” (Spike Lee’s term for a stock character in American cinema such as in “The Green Mile” or “Bagger Vance”), Trump is the magical WASP, the billionaire with the golden touch, who will make every other white person rich by his special superpowers, who can fail to pass any significant legislation but boast that he outdid Truman and Johnson, and who can fail to achieve a budget bill but conjure a wall out of mere racial hatred to keep Mexicans out. Why, Mike Pence even alleged that ISIL was running away from the Magical WASP, despite the spike in their terrorist attacks worldwide. The Magical WASP, unlike the Magical Negro, won’t provide cross-racial support. In fact, he won’t actually help anyone at all. He is a stingy billionaire and an abrasive politician. He doesn’t actually have special powers and isn’t actually able to help a hero with his quest. He is just a blowhard who spins fairy tales about helping people when he actually prevented their children from getting chemotherapy for their cancer. He is just a cruel mirage, giving hope to poor and working class whites who are too bigoted to take any help from someone like Obama.

Trump hinted broadly that he will pardon Sheriff Joe Arpaio, who was found in criminal contempt of court for defying a judge’s order to cease unconstitutionally harassing Latinos with no probable cause.

Trump threatened a governmental shutdown if congress did not fund the building of a 2,000-mile-long border wall, dropping his demand that Mexico pay for it. (In a leaked conversation with the president of Mexico, Enrique Peña Nieto, Trump admitted that it had all along been an unreasonable demand that would not be acceded to, but pleaded with his Mexican counterpart to avoid publicly refusing to pay).

Trump denounced the “crooked” news media as a purveyor of lies and urged the crowd to menace reporters.

This performance sent CNN’s Don Lemon over the edge. Lemon then led a panel discussion of just how unhinged Trump is. Lemon interviewed former top intelligence official James Clapper, he flatly said he thought Trump was unfit for the office and that he worried about this erratic person having access to the nuclear launch codes.

That brought the CNN commentators up short.

Trump rambled on for much of the speech complaining about the media coverage of his conflicting statements on Charlottesville. He neglected to quote his own statements that there had been many sides and that there were very fine people among the white supremacist invaders. He does not understand that when you engage in false equivalencies of that sort, it does not matter if you go on to speak of peace and love and racial inclusion. People forget that Tricky Dick Nixon used to talk about peace, too.

The president said that university administrations that removed confederate statues at night to avoid protests were “weak, weak, weak.” He alleged that Teddy Roosevelt statues were in their sights next.

Trump again pushed the fraud of “clean coal.” Coal power plants put mercury, a nerve poison, into our air, soil and water, affecting our children. They also spew millions of tons of toxic carbon dioxide into the atmosphere, causing global heating that threatens us with desertification, extreme weather, and sea level rise. Trump boasted about having withdrawn the US from the Paris climate accord, which had committed the country to reduce its massive carbon dioxide emissions (5.4 billion metric tons a year, more per capita than any other country in the world aside from tiny Australia).

Meanwhile, Phoenix has heated up so much under the impact of our carbon dioxide emissions, which Trump wants to increase, that planes sometimes can’t take off because it is too hot for the air to provide lift to the wings.

Trump avoided naming Sen. John McCain, who is battling brain cancer, but implicitly slammed him for declining to vote for a health insurance bill that would have kicked 26 million people off of health care. Trump had called the bill “mean,” and had campaigned on providing everyone in the country with affordable health care.

Trump said that the US had miraculously, because of his presidency, suddenly become an energy exporter for the first time in history. The US was the world’s swing producer of petroleum for much of the first half of the twentieth century.

There were 15,000 people in the Phoenix Convention Center to hear Trump, which is a relatively small crowd. But of course the Magical WASP insisted it was an enormous crowd and complained that the crooked media wouldn’t show it on tv.