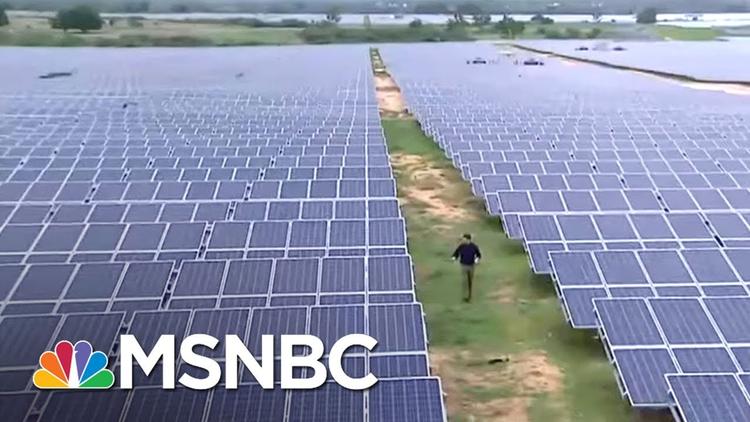 China has reached its 2020 solar power target three years ahead of schedule, after installed capacity topped well over its 105GW target. Europe has been urged to show similar ambition.

Solar power is enjoying a sunny 2017 in China, after the first half of this year saw capacity increased by 24.4GW, dwarfing similar efforts in Europe, and cementing China’s status as the world’s leading solar nation.

Solar photovoltaic capacity (PV) will soon match and even overtake nuclear energy’s global capacity, according to new US research. High demand means PV could even become the globe’s dominant energy source by 2050.

China is not planning to rest on its laurels either. Officials have recently tweaked its 2017 forecast for new solar installations and figures now suggest that total new capacity for this year could reach 45GW. In contrast, in 2016 Germany’s total capacity was 41.1GW.

Renewable energy groups have called on Europe to be more like China and strive to be number one in the sector. SolarPower Europe association urged the EU to increase the current 27% renewable energy target for 2030 to 35%.

The association’s recent Global Market Outlook concluded that only a 35% target will maintain the impetus for the renewable industry. It also estimated that the bloc will struggle to hit the current 27% goal unless ambitions are raised.

China’s ambitions are admittedly impressive. It already boasts the largest solar farm in the world, which measures in at over 30 square kilometres. It also recently opened the world’s largest floating solar farm, which is positioned over an old coal mine.

But once capacity and landmark projects are excluded from the equation, the Chinese solar sector does have significant problems. Although China hit its 2020 target, only 1% of its energy demand is satisfied by solar power. Coal still reigns supreme in its energy mix.

There is also the issue of subsidies. Feed-in-tariffs, paid to solar companies to generate power and make the market more attractive, have often arrived late, hurting the bottom lines of many of those energy firms.