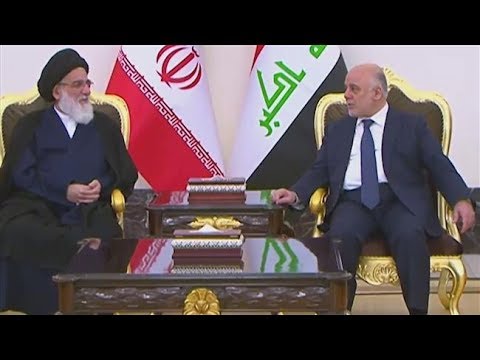 Iran wants to reunite the fighting Shiite Muslim political parties in Iraq that once gave it unconditional support. But that job is far from easy.

Last week Mahmoud Shahroudi, the head of Iran’s Expediency Discernment Council, which advises that country’s theological leader, Ali Khamenei, visited Baghdad. His objectives were clear: He planned to visit a variety of different Shiite Muslim political groups and potentially try and convince them of the advantages of sticking together.

Among the Shiite Muslim politicians that Shahroudi met was former Iraqi prime minister, Nouri al-Maliki, the cleric and political leader, Ammar al-Hakim, and also the leaders of some of Iraq’s Shiite Muslim militias, including Qais al-Khazali, head of the hard-line League of the Righteous militia. He also visited the headquarters of the Nujaba movement in the province of Salahaddin. Both the League of the Righteous and the Nujaba movement, which has ties to Hezbollah, have pledged allegiance to Iran’s religious leaders, rather than Iraq’s.

Iran’s main goal is to keep the prime minister’s seat for the Shiite Muslim parties.

Al-Sistani believes that while religion should play a major part in Iraq’s governance, that it should not interfere too heavily in politics. Iran’s Khamenei holds a very different point of view. The last senior politician to meet with Shahroudi in Iraq during this visit was the country’s current prime minister, Haidar al-Abadi.

“Shahroudi’s visit to Iraq is part of recent Iranian efforts to bring about rapprochement between different, rival Shiite Muslim parties in Iraq,” says one official from a Shiite Muslim party, who did not wish to be named because of the sensitivities of the subject. “There have been a number of these kinds of visits from Iranians, and Iraqis have gone to Tehran for the same reason.”

Apparently during his various meeting Shahroudi said he understood that the different Shiite parties had their differences but that it would be better if they all stuck together, especially with elections coming up in Iraq.

“Iran’s main goal is to keep the prime minister’s seat for the Shiite Muslim parties,” the official told NIQASH.

On paper, Shahroudi is a good choice to guide a Shiite reconciliation in Iraq. He is one of the founders of the party to which both al-Maliki and al-Abadi belong. He also has offices in both of Iraq’s important Shiite Muslim religious centres, Najaf and Karbala. Some rumours even have it that he is a potential successor to al-Sistani in Najaf; al-Sistani is getting older.

Of course, having Shiite Muslim politicians fighting amongst themselves is nothing new in Iraq’s turbulent political landscape. However in the past most of the scraps were between the main parties in the broader Shiite political alliance. Today there are internal fights, which have seen the major parties divide.

Although members of the two men’s party maintain there is no infighting, it seems clear the two senior politicians harbour ill will toward one another. Al-Maliki has often been openly critical of al-Abadi’s government and al-Abadi has been forced to respond.

One recent conflict saw al-Maliki announce his support for the deal reached between the Lebanese group, Hezbollah, and the extremist group known as the Islamic State. Meanwhile al-Abadi has said the deal, which would see fighters from the group transferred to the Iraqi-Syrian border, was an insult to the Iraqi people.

Al-Maliki countered by saying the Iraqi government had clearly made a similar deal with the Islamic State, or IS, group after fighting in the town of Tal Afar. Iraqi pro-government forces were able to retake the town far faster than expected after IS fighters simply fled. In a tit-for-tat, al-Abadi replied that such comments belittled the efforts of Iraqi forces fighting the IS group and that no such deal had been made.

Clearly the pair are not on particularly good terms.

There is also Ammar al-Hakim to worry about. In July, al-Hakim announced that he would be distancing himself from the Islamic Supreme Council of Iraq, an important religious and political organisation that is considered his family’s legacy. Al-Hakim announced he was forming a new alliance, one, which actually most of the senior members of his former organisation then joined. Left behind at the Islamic Supreme Council were older members, who mostly disapproved of the younger al-Hakim.

Among these are Humam Hamoudi, who had been deputy leader but now becomes leader of the Council, Bakr Jabir al-Zubaidi and Jalal al-Din al-Saghir. Those left behind appear closer to Iran whereas it seems al-Hakim would prefer to join the Iraqi camp, with their allegiances with al-Sistani.

Fighting over the split continues to this day with arguments about the division of funds and property going on.

Another young cleric, Muqtada al-Sadr, is also of intense concern to the Iranians. His bloc, which holds 30 seats in the Iraqi Parliament, was the first to announce its dissatisfaction with the broader Shiite Muslim alliance and has apparently been considering entering into a new alliance with secular parties. The Shiite Muslim alliance will lose the majority they have had in parliament for the last few years if the Sadrists depart.

Currently the Sadrists have nothing to do with the Shiite Muslim alliance, Jaafar al-Moussawi, a senior Sadrist politician, told NIQASH. “The Sadrist movement is not a member of the alliance and has nothing to do with what is going on inside it, including the selection of a new head and the formation of any electoral alliances.”

On September 5, Ammar al-Hakim’s two-year role as the president of the Shiite Muslim political alliance ended. Al-Hakim had already given a speech saying he would not seek to remain in the job and suggested that other Shiite Muslim parties arrange a replacement as quickly as possible.

By rights it would be the turn of the Dawa party, the party that includes both al-Maliki and al-Abadi, to choose a new leader of the alliance. But this will be difficult. Besides the divisions within the Shiite alliance, al-Maliki is competing with Hadi al-Ameri, the leader of the large and influential – and armed – Badr organisation, for the job.

“Al-Ameri is a strong candidate,” Amir al-Fayez, an MP belonging to the alliance, told NIQASH. “He has supporters and during the next few days, an important meeting will be held in this regard.”

The rules of the Shiite Muslim alliance say that whichever party holds the prime minister’s job, cannot also hold the leadership of the broader alliance.

What’s really going on will only be revealed after the passing of several laws on election procedures: Currently the plan is to hold both the provincial council and federal elections on the same day in April next year. After the legislation has been passed, the divisions and alliances between various Shiite Muslim political groups will become much clearer, as they will announce the alliances with which they plan to contest the elections.