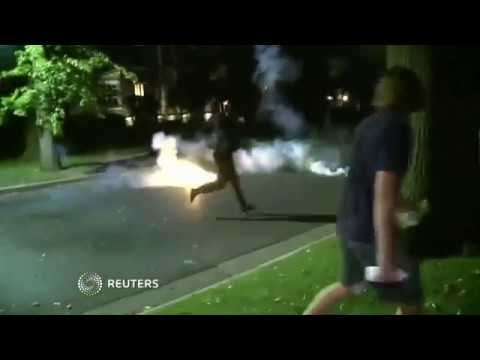 Saturday’s demonstrations were markedly calmer after nearly three dozen people were arrested the day before.

Protests have continued for a second day in St. Louis, Missouri following the acquittal of former cop Jason Stockley, who had been charged with first-degree murder for the killing of Anthony Lamar Smith in 2011.

Hundreds of demonstrators shouted slogans such as “Black lives matter!” and “It is our duty to fight for our freedom!” as they circled the city’s most populous areas such as the Delmar Loop in suburb of University City, which is known for its concert venues, restaurants, shops and bars.

“I don’t think racism is going to change in America until people get uncomfortable,” said Kayla Reed of the St. Louis Action Council, a protest organizer, the Chicago Tribune reported.

“Not saying or doing anything makes you complicit in the brutalization of our friends and neighbors,” said Susanna Prins, who carried a “White silence is violence” banner during the protests.

Saturday’s demonstrations were markedly calmer after nearly three dozen people were arrested the day before, mostly for failure to disperse, resisting and interfering.

The protests had heated up Friday night with hundreds taking to the streets, prompting the National Guard to be on standby, and shutting down several businesses, schools and banks early.

More protests are expected Sunday. Events, including concerts by Ed Sheeran and U2 have been cancelled because police say they cannot provide aqequate security resources given the levels of unrest.

Former Officer Stockley had pleaded not guilty, saying he had acted in self defense during the December 2011 incident, while prosecutors had accused him of planting a gun on Smith to justify the shooting.

The revolver found at the scene only showed the officer’s DNA.

However, Wilson ruled that based on “nearly thirty years on the bench … an urban heroin dealer not in possession of a firearm would be an anomaly,” concluding that Smith had been the owner of the firearm, and referencing the drug found in Smith’s car.

Numerous studies have revealed the disproportionate times that Black people are targeted and killed by police in the United States compared to whites.