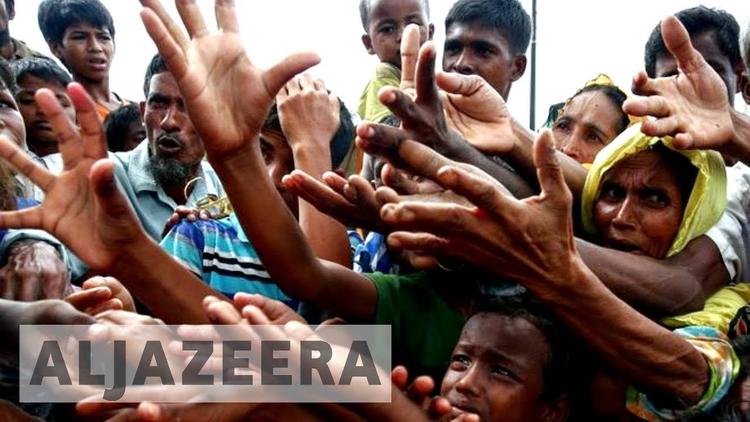 Around 27,400 Rohingya Muslims have crossed into Bangladesh from Myanmar since Friday.

Bangladeshi border guards have recovered two dozen bodies from the country’s shore in the last two days, as tens of thousands of Rohingya Muslims flee violence in Myanmar.

The bodies of 11 Rohingya children and nine women washed up on the Bangladesh side of the Naf river after their boat overturned, said Ariful Islam, a commander with Bangladesh’s border guards.

On Wednesday, the bodies of two Rohingya women and two children were recovered after their boat was fired on by Myanmar’s Border Guard Police, Islam said.

Officials in Bangladesh say growing numbers of Rohingya are trying to cross the Naf river that divides the two countries in rickety boats ill-equipped for the rough waters as they become increasingly desperate to escape the worst violence involving the Myanmar minority in at least five years.

According to three United Nations sources, around 27,400 Rohingya have crossed into Bangladesh from Myanmar since Friday, after Rohingya insurgents attacked police posts and an army base in Rakhine state, leading to clashes that have killed at least 117 people.

One survivor told AFP that the small, overcrowded boat he was traveling in had been tipped over by huge waves near where the Naf river opens out into the sea.

“Nobody knew how to navigate the sea waters. When huge waves tilted the boat, we panicked,” Shah Karim said.

About 1.1 million Rohingya Muslims live in Myanmar’s Rakhine state, but they are denied citizenship and are seen by many officials in Myanmar as “illegal immigrants.” Bangladesh is also growing increasingly hostile to Rohingya, more than 400,000 of whom live in the South Asian country after fleeing Myanmar since the early 1990s.

Bangladesh sent back 366 Rohingya trying to enter the country mainly by small wooden boats Wednesday, though thousands of others have set up temporary camps along the land border between the countries.

“We have given shelter to a huge number of Rohingya refugees in Bangladesh on humanitarian grounds and it’s a big problem for us,” Prime Minister Sheikh Hasina said, according to the state-run BSS news agency

The Myanmar government said its security forces are carrying out clearance operations in northern Rakhine to defend the country against “extremist terrorists.” Thousands of Buddhists from Rakhine were evacuated since the start of the fighting, it said.

Chris Lewa, of the Rohingya monitoring group the Arakan Project, said to Reuters it appeared Myanmar security forces were trying to drive out a large proportion of the Rohingya population as their villages have burned down.

Abdullah, a Rohingya from the region of Buthidaung, told Reuters four of the six hamlets in his village of Mee Chaung Zay had been burned down by security forces. All its residents have had to flee toward Bangladesh.

“The situation is very terrifying, houses are burning, all the people ran away from their homes, parents and children were divided, some were lost, some are dead,” Abdullah said.

Aljazeera English: “Myanmar’s Rohingya refugees: ‘If we go back they will slice us into pieces'”