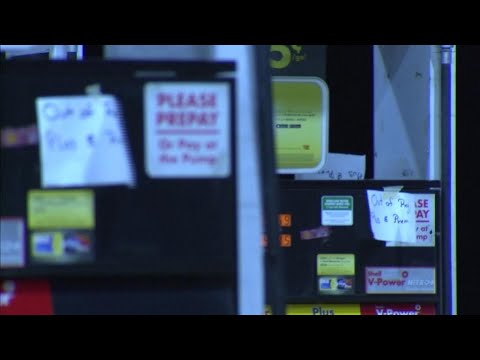 Extreme weather is in our future. Caribbean hurricanes of the future will be more and more violent and destructive because of manmade global heating. Sea level rise will open the coast to bigger storm surges. The number of coastal floods has already doubled since the 1980s because of people driving their gasoline cars and running their air conditioners off burning lumps of coal. Hotter air over hotter water will have more moisture in it, setting the stage for regular flooding. Hotter water creates more powerful winds within hurricanes.

So the bad news is that a fossil fuel energy system does not deal well with extreme weather.

Even just by Thursday, Harvey had shut down so many oil refineries that it had taken 20% of daily US gasoline production off line. By Friday it was being announced that so many refineries had been damaged that the major pipeline that brings 3 million barrels a day to the east coast, had been shut down. Altogether, 4.4 mn b/d of refinery capacity is off line now. About half a million barrels a day of refining capacity will remain shut down well into next winter.

Reuters quoted a market analyst as saying, “Imports can’t make up for this. . . This is going to be the worst thing the U.S. has seen in decades from an energy standpoint.”

Not only is gasoline going to be more expensive as a result, but the pollution dangers from the damaged refineries are horrific.

But guess what? Texas’s wind turbines weathered Harvey. Some were pushed to the max by its powerful winds, but they just went on making electricity! Turbines shut down if the wind is 55 mph or more, but most wind farms affected by Harvey were able to keep operating. One shut down because the electrical wires were knocked down, not because the turbines stopped working!. On an average day, Texas gets 20% of its electricity from wind. That only fell to 13% the day of Harvey’s landfall.

Harvey also menaced a nuclear reactor, a la Fukushima, but we dodged that bullet this time.

Nuclear reactors no longer make any sense, and they remain dangerous and vulnerable to extreme weather events. Even if wind turbines did get damaged by a storm, they don’t explode or spread around radioactive fallout.

Duke Energy has just abandoned plans for a nuclear reactor and is instead putting $6 bn into solar and wind.

So it turns out that not only would a rapid turn to 100% green energy, as California plans, forestall further global heating, it can help keep us safe during the extreme weather caused by . . . burning fossil fuels in the first place.

The problem of fossil fuels and global heating is only going to get worse. The National Institutes of Health warns,