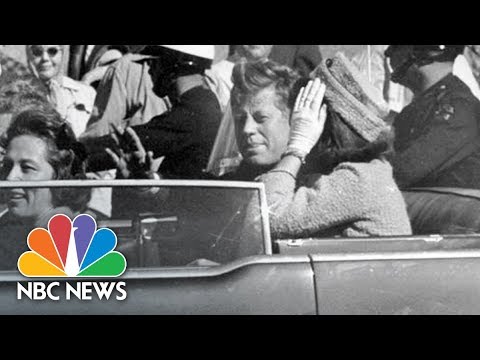 Nearly 3,000 documents previously kept secret are now in the process of being published online by the National Archive. As much as 88% of the collection has been available to the public since the late 1990s, but a small portion is still being withheld.

Conspiracy theorists have been quick to seize on the now-public documents. One FBI memo from 1966 claims the KGB suggested that the assassination of JFK was not the work of one man but the result of a well-organised conspiracy on the part of the “ultra-right” in the US, laying the blame firmly at the feet of former President Lyndon B Johnson.

“According to our source, officials of the Communist Party of the Soviet Union believed there was some well-organized conspiracy on the part of the ‘ultraright’ in the United States to effect a ‘coup,'” reads the memo, forwarded by FBI Director J Edgar Hoover. “They seem convinced that the assassination was not the deed of one man, but that it arose out of a carefully planned campaign in which several people played a part.”

In another memo dated 26 November 1963, the FBI scrambled to gather all the information it could about Jack Rubenstein, also known as Spark Rubenstein and Jack Ruby, in the hours immediately after he shot dead suspected assassin Lee Harvey Oswald.

According to an informant, Ruby had a “good in” with the Dallas police, “which would be borne out from his observation that Ruby had a B-girl operation where drinks were pushed heavily with no interference from the police department.”

One source described Ruby as “an extremely stubborn person and a publicity hound.” Citing Ruby’s “emotional instability,” the source said he “did not think it unusual when Ruby was reportedly more upset over the death of the president than the death of his own father.” He was surprised Ruby had “actually killed Oswald” rather than simply wounding the captive “in the leg with a .22 caliber weapon in order to get publicity.”

Another memo, also by Hoover, reveals that the FBI was warned of the death threat against Oswald in Dallas. “There is nothing further on the Oswald case except that he is dead,” Hoover writes. “Last night we received a call in our Dallas office from a man talking in a calm voice and saying he was a member of a committee organized to kill Oswald.

Another difficult-to-decipher document, also from the FBI, sheds some light on the bureau’s reaction to the slaying of Oswald. One source notes he “considered it virtually impossible to have prevented the assassination, but considered the subsequent slaying of Oswald to be inexcusable. We should never have let this happen.”

The sheer volume of information being released is itself overwhelming. Larry Sabato, director of Center for Politics at the University of Virginia, told CNN it could take months or even years to decipher all of the details.

“The good stuff was held back. What we got is raw intelligence information, loads of rumors. There is no owner’s manual to this stuff. There is no clear guide. In 25 years, you think they would have put together something that is intelligible for the public, but they did not.”

In a new memo from the White House, US President Donald Trump says he blocked the release of an unknown number of files because he had “no choice” but to accept the concerns of agencies such as the FBI and CIA.

In the days leading up to the Thursday deadline, Trump had previously hyped the documents’ release as a victory for the public that would be “so interesting!”

But he later conceded to “national security, law enforcement, and foreign affairs concerns”, ordering a 180-day review for the agencies to reconsider their redactions. The result is yet another deadline for documents: 26 April, 2018.

Federal government agencies indexing all JFK assassination-related records were required to transfer the files to the National Archives per orders of the JFK Assassination Records Collection Act passed by the U.S. Congress in 1992. The collection includes some five million pages of records.