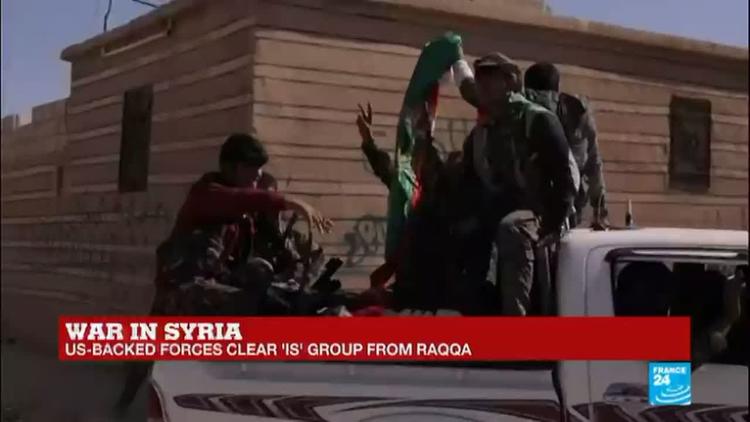 Raqqa, the capital of the ISIL phony “caliphate” in eastern Syria, has completely fallen, according to a spokesman for the US-backed Syrian Democratic Forces. It is just a matter of neutralizing a few remaining cells and defusing booby traps in the city.

The SDF is primarily made up of leftist Kurds of the YPG or People’s Protection Units, the paramilitary of the Democratic Union Party of northeast Syria. There are a few Arab adjuncts for appearances, since the US has enlisted the Kurds in taking primarily Arab areas under ISIL control.

In Iraq, ISIL has also lost almost all significant territory to the Iraqi Army, which was supported by Shiite militias and the Kurdish Peshmerga. Last month, 1000 militants surrendered at Hawija, a largely Sunni Arab town near Kirkuk.

Although it now cannot be called a territorial ‘state,’ ISIL hasn’t disappeared. It will devolve back into being a destructive terrorist organization. Still, it will have far fewer resources for committing terrorism.

Americans are arguing over whether Trump or president Barack Obama is responsible for the victory.

It is a self-absorbed and shameful debate, as though the whole world revolves around America’s broken two-party system. As for Trump’s egomania of the three-year-old sort, where everything that happens while he is alive derives from him, surely we need not take it seriously enough to argue with it.

ISIL was defeated by local Muslims, with air support and strategic advice from the United States and from Iran. But literally thousands of local Muslim troops died for this victory, and it is their’s.

Although Western journalists such as Graeme Wood argued that ISIL is ‘very very Islamic,’ most of the world’s Muslims beg to differ. They see it as a bloody and destructive cult, according to all the opinion polling.

It is true that President Obama and his Secretary of Defense Ash Carter laid out the strategy. In Iraq, Obama reestablished the American military Iraq Command and sent in several thousand special forces personnel to retrain and reestablish the Iraqi army. At the same time, Iraq’s Shiite militias, some of which had become defunct, were revived. In part, they volunteered at the instance of Grand Ayatollah Sistani, who issued a fatwa or considered legal opinion on the need to put down ISIL. In part, they received money, training a direction from the Jerusalem Brigade of the Iranian Revolutionary Guards Corps, headed by Qassem Soleimani. Since the Iraqi army had collapsed in June of 2014 when it ran away from ISIL in Mosul, the role of the Shiite militias in support of the army was key. The US de facto gave the Iran-backed militias air support, though neither Washington nor Tehran can admit it publicly. The Americans trained three counter-terrorism brigades in the Iraqi army, who spearheaded the fight against ISIL and took extremely heavy casualties.

Trump did not take those casualties. The Iraqi army did.

In Syria, Obama and Ash Carter allied with the YPG Kurds, giving them training and arms and and embedding hundreds of Special Ops troops among them. They renamed the YPG the Syrian Democratic Forces to allay Arab and Turkish fears (it did not work) and sent them against ISIL. Initially the SDF Kurds wanted only to go against ISIL in the West, so that they could establish a corridor linking the Jazeera in the northeast with Kobane to its west and to a third canton, Afrin. This move west was ultimately blocked by Turkey and its Arab guerrilla allies, most of them Kurd-hating fundamentalists. Then somehow the US at length persuaded the YPG Kurds to fight down south to Raqqa, giving them air support. It wasn’t only US fighter jets that supported the mission but also French and British (the French want revenge for the Paris attacks). Again, the heavy casualties were taken by YPG fighters.

ISIL split from al-Qaeda in 2013 and gained a nasty reputation as an opportunistic and bloody organization willing to stab its allies among the Arab rebels in Syria in the back for its own gain in loot or territory. Abu Bakr Baghdadi, the nom de guerre of Ibrahim al-Samarra’i, a minor professor of Islamics trained in an undistinguished department at Baghdad University, announced in 2014 that he was a “caliph,” a medieval office sort of like the papacy for Sunni Muslims. The claim was rejected by virtually all the 1.6 billion Muslims in the world.

You can bomb a guerrilla group like ISIL from the air forever and make almost no impact. You need troops on the ground to take territory. Obama was stymied for a while in finding such troops. Turkey was more worried about the Kurds than ISIL. Saudi Arabia was more worried about Iran and al-Assad. It was the Iraqi army and the YPG that stepped up.

The US helped tremendously but it isn’t clear that the mission could not have been accomplished without Washington. Obama should get some credit for a winning strategy. Trump just piggy backed on that strategy, keeping it completely intact.

Extremism was defeated by the Muslims. That should be the headlines. That is what Americans have trouble getting their heads around.