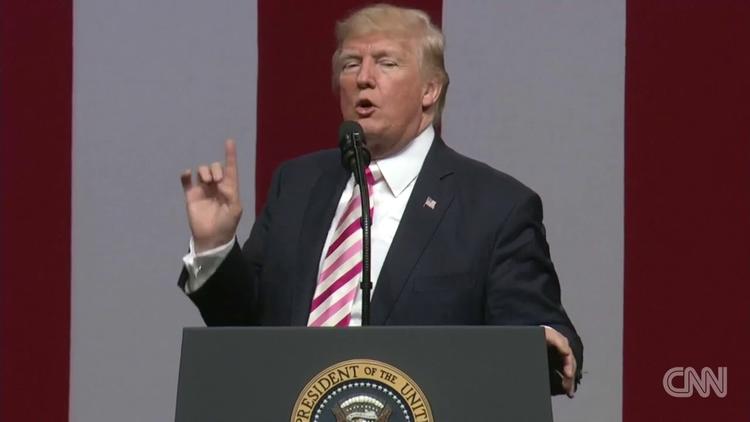 When San Francisco 49ers quarterback Colin Kaepernick chose to remain seated during a pre-game national anthem in protest against racial injustice and police brutality last year, his action caused widespread controversy. Now Donald Trump has reignited that controversy by suggesting at a rally that National Football League (NFL) players who take similar action should be kicked off their teams:

Wouldn’t you love to see one of these NFL owners, when somebody disrespects our flag, to say ‘get that son of a b*tch off the field right now, he’s fired? He’s fired!’

The fallout was immediate. Stephen Curry, player for the Golden State Warriors, responded that he did not want to attend an event at the White House honouring the team’s success. Trump fired back by publicly withdrawing the invitation. In response, teams, players, and managers across the country (and at the London-based NFL games) followed Kaepernick’s example and kneeled, or stood, with arms locked in protest as the anthem was played before their games.

And so the debate rages on. But if anyone defending the players’ right to kneel (or #TakeAKnee) needs some backup for their arguments, there’s an obvious place for them to look: the judgements of the US Supreme Court, which has heard a number of major cases involving the Pledge of Allegiance and the treatment of the American flag, all touching on the obligations of patriotism and the right to refuse to participate in national rituals. And more than that, the court is generally
supported by the people it serves – even when they disagree with its decisions.

So as the Trump-NFL national anthem controversy continues, let’s look at some of what the court has said on this subject over the decades.

In January 1942, shortly after the attack on Pearl Harbor and America’s entry into World War II, West Virginia’s State Board of Education adopted a resolution requiring the state’s children to salute the flag as part of their daily school activities. Much as did Trump in his recent tweets about players’ refusal to stand for the national anthem at sporting events, the board argued that the salute would “honour the nation represented by the flag” and that refusal to participate would be “regarded as an act of insubordination”.

The board’s actions were inspired by a ruling two years earlier. In Minersville School District v. Gobitis (1940), it was found that a compulsory flag salute and recitation of the Pledge of Allegiance did not violate the constitutional rights of Jehovah’s Witness children, who objected to the actions on the grounds that it violated their faith’s requirements not to worship graven images. The fallout from that decision included laws and resolutions similar to West Virginia’s, increased reports of physical assaults on Witness children, and threats to send non-conforming children to reformatories.

But the backlash wasn’t long in coming, and in 1943, the court reversed its decision in West Virginia State Board of Education v. Barnette, holding that such compulsory activities did violate the US Constitution.

The court recognised that the flag symbolised adherence to the government and that national unity was an important value: “National unity as an end which officials may foster by persuasion and example is not in question.” It also noted that the case involved an emotional issue and was difficult “not because the principles of its decision are obscure, but because the flag involved is our own”. But the court also argued that “to sustain the compulsory flag salute we are required to say that a Bill of Rights which guards the individual’s right to speak his own mind, left it open to public authorities to compel him to utter what is not in his mind”.

Recognising that the Board of Education had acted in good faith, the court nevertheless issued a stark, eloquent warning:

Struggles to coerce uniformity of sentiment in support of some end thought essential to their time and country have been waged by many good as well as by evil men … Those who begin coercive elimination of dissent soon find themselves exterminating dissenters. Compulsory unification of opinion achieves only the unanimity of the graveyard.

The justices also had a message for those who saw the children’s refusal as a threat to American patriotism and unity: “To believe that patriotism will not flourish if patriotic ceremonies are voluntary and spontaneous instead of a compulsory routine is to make an unflattering estimate of the appeal of our institutions to free minds.”

Individuals might disagree with the actions taken, the court argued, but that does not mean such actions threaten the nation’s future, strength, or unity. In fact, the freedom to disagree is at its strongest when such disagreement touches on the most controversial issues.

Those most upset about players who choose not to stand for the national anthem might also do well to revisit a 1990 case, Texas v. Johnson, in which the court struck down a Texas law banning the burning of the American flag.

In concurrence with the decision, Justice Anthony Kennedy expressed his difficulty with the case:

The hard fact is that sometimes we must make decisions we do not like. We make them because they are right, right in the sense that the law and the Constitution, as we see them, compel the result. And so great is our commitment to the process that, except in the rare case, we do not pause to express distaste for the result, perhaps for fear of undermining a valued principle that dictates the decision. This is one of those rare cases.

“I agree,” Kennedy continued, “that the flag holds a lonely place of honour in an age when absolutes are distrusted and simple truths are burdened by unneeded apologetics.” But, he argued, “it is poignant but fundamental that the flag protects those who hold it in contempt”.

Kennedy’s words have a particular message for those who see the players’ actions as an affront: sometimes those same American values demand you accept actions of which you don’t approve. You don’t have to like the decision to kneel during the national anthem, but you do have to accept that people have the right to do so without fear of retaliation.

The court has time and again recognised that the American people think differently about issues, and that they can express those differences so long as others are not prevented from exercising their own right to reply. Those caught up in the current debate should take heed.

The Late Show with Stephen Colbert: “Trump’s NFL Comments Have Everything To Do With Race”