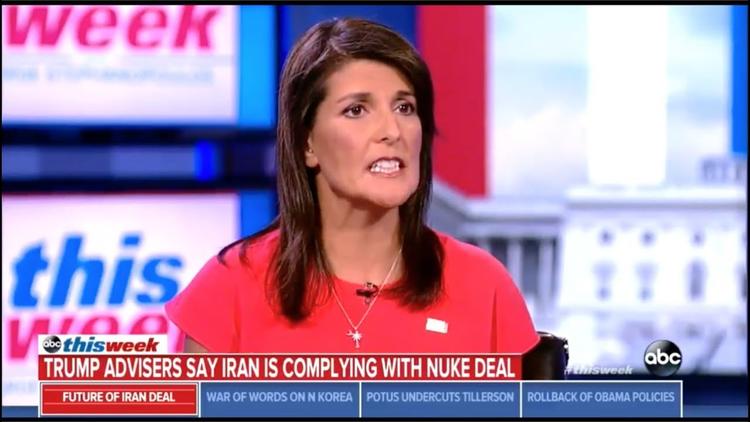 U.S. President Donald Trump has refused to tell Congress that the 2015 nuclear deal the Obama administration reached with Iran and five other world powers still serves U.S. national interests. This refusal, or decertification, went against top officials in his own government and the International Atomic Energy Agency.

Nobody should be surprised. Trump has attacked the Iran deal for years without offering a realistic alternative. His Oct. 13 speech on Iran was long on recriminations, but short on factual analysis and practical recommendations. This disconnect has kept experts and pundits guessing about what Trump’s decertification is meant to achieve.

There are three common interpretations. Each makes different assumptions about how Iran will react. All rest more on wishful thinking than a solid understanding of politics in Iran.

A key figure in Iranian politics is Hassan Rouhani, who was elected president in 2013. He won by promising that skillful diplomacy could improve Iran’s economy without sacrificing key aspects of Iran’s nuclear program.

The Center for International and Security Studies at the University of Maryland, where I am the director, has worked with partners in Tehran and Toronto on nine surveys of Iranian public opinion before and after Rouhani’s recent reelection. Data from these surveys clearly suggest that each set of assumptions underlying interpretation of Trump’s strategy is wrong.

In the most benign interpretation, responsible members of the Trump team are letting the president play to his domestic political base by denouncing the deal, but not allowing him to withdraw or reimpose sanctions that would violate it.

This interpretation depicts decertification as a “legal placebo” – a harmless, if ineffectual, way to make a petulant president feel better. It assumes that Iran will honor its nuclear obligations so long as the United States does not reimpose nuclear sanctions, thus preserving the benefits of a deal that Trump’s secretary of defense testified does serve U.S. interests.

Do Iranians really expect the economic benefits of the deal to outweigh the costs incurred by adhering to an agreement that is continually being undercut by the United States? They might – but that hope is fading fast.

In June 2017, 64 percent of respondents to our survey said that their economy was bad and 50 percent thought it was getting worse. Seven in 10 said that the deal had not improved living conditions of Iranians at all.

Two-thirds still support the nuclear deal. But, U.S. actions are eroding optimism that the deal will eventually make life better. That has dropped to 59 percent, down from 66 percent a year earlier.

Iranian confidence that the United States will uphold its end of the bargain has already dropped precipitously, from 45 percent shortly after the deal was signed to 24 percent in June 2017. Confidence in the other parties to the agreement – Britain, France, Germany, China and Russia – is higher at 53 percent. But 71 percent of Iranians do not think the Europeans are moving as rapidly as they could to engage economically with Iran, mostly due to U.S. obstructionism and pressure.

A clear majority, 55 percent, say that if the United States takes measures against Iran that violate the nuclear deal, Iran should retaliate by restarting aspects of its nuclear program. Only 41 percent want to abide by the agreement and try to resolve the problem diplomatically.

Trashing the Iran deal without tearing it up, in other words, is not a harmless outlet for Trump’s animosity. The more he makes threats and sows uncertainty, the more likely Iran leaders are to decide that the gains are not worth the grief.

The second interpretation takes at face value Trump’s claim that decertification is meant to increase U.S. bargaining leverage and get more out of the nuclear deal.

Secretary of State Rex Tillerson implied that allied support for tougher sanctions on Iran’s ballistic missile tests might be required to keep the United States in the nuclear deal. The administration is also supporting legislation co-sponsored by Republican Sens. Bob Corker and Tom Cotton that would automatically reimpose sanctions if Iran does not obey demands that go well beyond the terms of the nuclear deal itself.

Iranians would be even more firmly opposed to these policy changes if they got nothing new in return. Thus, threatening to reimpose nuclear sanctions is counterproductive if the objective is to get more from Iran.

A third interpretation suggests that Trump does not really want to prolong, or to improve, the nuclear deal. Instead, he wants to end it, preferably without being blamed for the deal’s demise, and help the people of Iran get a government that is peace-loving and democratic. If so, he would be following some version of a strategy proposed by John Bolton, a leading neoconservative from the George W. Bush administration.

Trump’s speech denounced Iran’s government as a fanatical dictatorship that violently suppresses its own people, supports terrorism and causes conflict throughout the Middle East. He also alleged that this “rogue regime” had been on the verge of total collapse before the nuclear deal lifted sanctions and provided a huge financial boost.

From this perspective, the main effect of the nuclear deal has been to prolong the power of Iran’s supreme leader and his “corrupt personal terror force and militia.” Trump’s pledge to terminate the nuclear deal if Congress and U.S. allies cannot gain Iranian acquiescence to unacceptable demands would demonstrate “total solidarity with the Iranian regime’s longest-suffering vicitims: its own people.”

Our surveys show that Trump misunderstands what the Iranian people want. The vast majority list economic problems, particularly unemployment, as their greatest concern, not political issues, like corruption or human rights. Pre-election data showed that younger Iranians preferred Mohammad Bagher Ghalibaf, Tehran’s conservative mayor who eventually dropped out of the race, to Rouhani, who is more moderate politically but has less impressive economic achievements.

The Iranian people want the United States to fulfill the economic promises it made in the nuclear deal, not to foment internal unrest and radical political change. When asked about the meaning of Rouhani’s reelection, only about a third said it showed that most Iranians wanted religion to play a lesser role in policymaking. Less than a quarter saw it as evidence that the Iranian public disapproved of the ideals of the Islamic revolution. In other words, by reelecting Rouhani, Iranians showed support for continuity and moderation, not fundamental changes to their political system.

Trump seems to think that he gains a strategic advantage by keeping everybody else guessing. That might be true if he had a sound strategy that could achieve his objective so long as his opponents could not anticipate his next move and counteract it. With Trump’s decision to decertify the Iran deal, though, the evidence suggests that whatever strategy he has will likely be self-defeating.

Nancy Gallagher, Interim Director at the Center for International and Security Studies at Maryland (CISSM) and a Senior Research Scholar at the School of Public Policy, University of Maryland