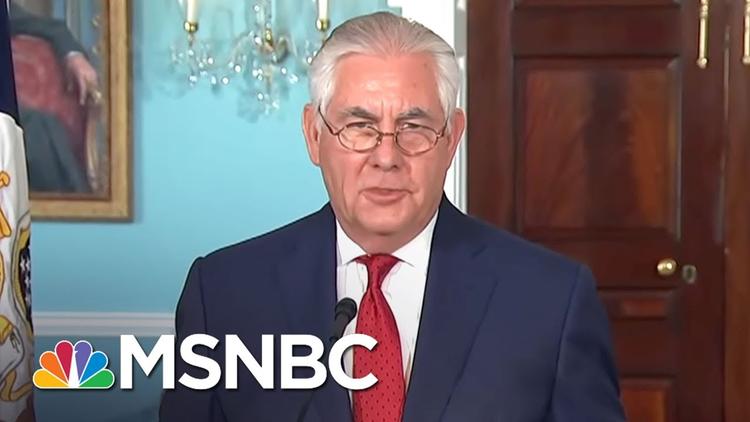 Carol E. Lee at NBC reported Wednesday that last summer Rex Tillerson, the secretary of state, called Trump a “f*cking moron.” The remark came after a number of incidents in which Trump had contradicted Tillerson on policy, and directly after Trump made salacious remarks to a crowd of boy scouts. Tillerson at one point had led the Boy Scouts.

The justice of Tillerson’s remark is obvious. Here are some examples:

1. Trump joined with Saudi Arabia in beating up on little Qatar, calling the small Gulf monarchy “terrorists.” Qatar hosts the US Air Force base al-Udeid and helped capture Khaled Sheikh Muhammad, proving itself a key ally in fighting extremism. For Saudi Arabia to accuse Qatar of fostering extremism is a bit rich, but Trump joined in.

2. The Iran nuclear deal is one of the more successful such negotiations in modern history and a model for how the UN Security Council could curb nuclear proliferation. Trump is determined to undermine the deal, which would reinforce the suspicions and militancy of countries such as North Korea, making it even more difficult to handle.

3. Trump pulled out of the Paris climate accords on the grounds that they are too constricting and detract from US sovereignty. But the accords allow each nation to set its own priorities! Even Tillerson, who when it comes to climate change, is Satan incarnate, wanted to stay in Paris (I presume because it could be used as a fig leaf for inaction on carbon dioxide emissions).

4. Trump went to Puerto Rico on Tuesday and made the presidency a laughingstock. He maintained that Katrina had been a much more devastating storm than Irma and that because they weren’t actually dead the Puerto Ricans weren’t suffering as much. We don’t know the death toll in Puerto Rico because 95 percent of the island doesn’t have electricity and not all the dead have been found by institutions of the commonwealth. Moreover, catastrophic hurricanes are not a race where one state wins and another loses. Then Trump gave out supplies at a church, including flashlights, but he remarked to recipients that they didn’t need flashlights any more. They do. He made hurricane relief all about himself instead of about the victims. It was so bizarre a performance that “moron” doesn’t begin to cover it.

5. Trump gave away US foreign policy to Exxon Mobil, the big oil company, which had been led by Mr. Tillerson up until his move to the State Department. The US should be making a frantic and concerted effort to get off fossil fuels, not coddling Big Oil interests. Appointing Tillerson to run the State Department, and letting him gut it in favor of lucrative oil deals for his former corporation is just about the most moronic thing you could imagine.