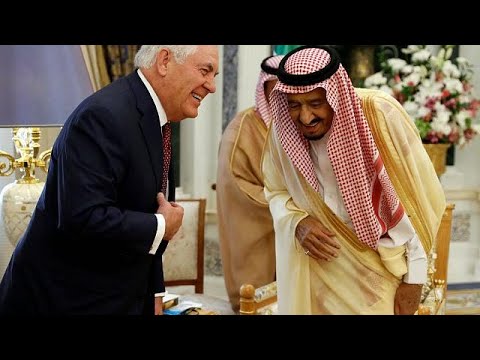 Trump-style ignorance and faux pas are spreading, with Tillerson making missteps on Iraq.

Secretary of State Rex Tillerson, in Riyadh, Saudi Arabia for consultations, called on Iranian militias in Iraq to “go home.”

There is one problem. There are no Iranian militias in Iraq. The Popular Mobilization Units or PMUs are drawn from Iraqi Shiites and are very, very, Iraqi. As Iraqi as Cockneys are British. So this is like Tillerson giving a speech calling on Cockneys in Britain to “go home.”

Now it is true that these Iraqi Shiite militias receive money, training and advice from the Iranian Revolutionary Guards Corps (IRGC), especially the elite special ops Jerusalem Brigade of that organization, led by Qassem Soleimani. But neither the IRGC nor the Jerusalem Brigade have many personnel in Iraq on a continuing basis. And despite a State Department attempt to “clarify” Tillerson’s remarks, it is clear that he simply did not understand that the PMUs are made up of Iraqi Shiites.

It is possible that Tillerson does not know that Iranians speak Persian, an Indo-European language like English, while most Iraqi Shiites speak Arabic.

Or perhaps he confused being Shiite with being Iranian. Iran is the most populous Shiite state, with 80 million people, of whom 92% adhere to the Shiite branch of Islam. Some 10% of the world’s Muslims are Shiites, believing that the prophet Muhammad’s cousin and son-in-law, Ali ibn Abi Talib (d. 661), should have directly succeeded him as his vicar. Sunni Muslims hold that it was right and proper that Ali had to wait out the reigns of Abu Bakr, Omar and Othman before coming to power in 656. There are of course other differences between the two, as well.

The US is attempting to sanction the IRGC officers, but it is not clear that the Europeans, Russians and Chinese will go along with this unilateral US obsession, which Washington shares with Tel Aviv.

The reason Tillerson will fail in detaching Iraqi prime minister Haydar Abadi from the Shiite militias and from Tehran is that Abadi needs both to remain in power. Baghdad has excellent relations with Tehran, and the IRGC played a key role in defeating ISIL by its training and support for the Iraqi Shiite militias. During the fight against ISIL in Iraq, in fact, the US air force coordinated with the Iran-backed Shiite militias. That cooperation is now being covered up because ISIL is on its last legs.

An anonymous state department source told the wire services that the US wants to see the Shiite militias absorbed by the regular Iraqi army.

That’s a great idea, but it won’t happen and by Iraqi law it need not happen. Last November, the Iraqi parliament voted to recognize the Popular Mobilization Units aka the Shiite militias as a sort of Iraqi national guard, with all the same privileges as the regular army.

So not only don’t the Iraqi Shiite militias have to go home (they are already home) but they also don’t have to be integrated into the regular army, as the US insists they be. I’m not sure why Tillerson thinks he can over-rule a sovereign parliament like Iraq’s. It is something Iraqis, who have suffered since the teens of the last century with Western interventions, invasions, occupations, etc, won’t put up with.

It is touching that the US thinks the Iraqi regular army is less full of pro-Iran Shiites than the PMUs, but I have some news for Washington.

Tillerson’s apparent hope of detaching Baghdad from Iran and having Shiite-majority Iraq instead hook up with Shiite-hating Wahhabi Saudi Arabia is about the most pitiful thing I’ve ever seen.

Americans are focusing on all of Trump’s ‘misstatements,’ but in fact his entire cabinet is full of people who are not in the reality-based community.