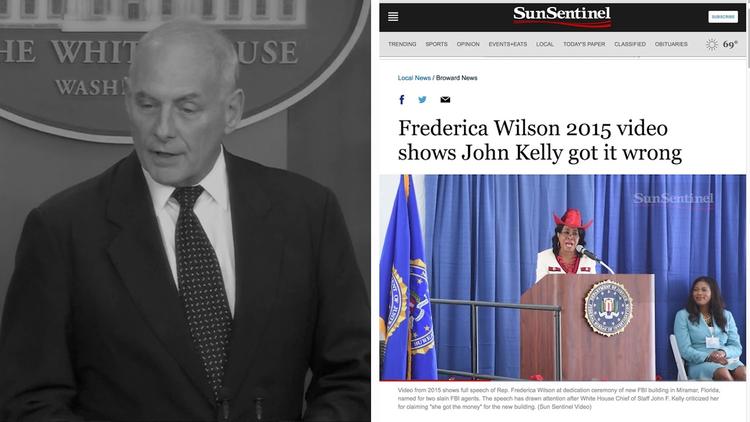 “Oh, no. No. Never. Well, I’ll apologize if I need to. But for something like that, absolutely not. I stand by my comments.”

This was the response by General John Kelly when asked on Monday night whether he was going to apologize to Representative Wilson for both insulting her and lying about her (as proven by video evidence). Without naming her, he had implied that she was a grandstander for telling people about Trump’s botched call to a Gold Star family. In defending Trump, Kelly had said that she was “in a long tradition of empty barrels making the most noise.” Also, he had lied about her claiming credit at a building dedication ceremony: “And we were stunned, stunned that she’d done it. Even for someone that is that empty a barrel, we were stunned.”

Before the October 30 interview with Laura Ingraham, I had been willing to give Kelly the benefit of the doubt regarding his possible racism when he denigrated Wilson (an African American woman). His outrageous interpretation of the Civil War, though, reflects the white supremacist view of slavery and the real cause of that war. In discussing the conflict between the North and South, he talked about the “men and women of good faith” who followed their consciences—but nothing about the slaves themselves. (He did not explain how a person of conscience could actually condone the horrors of slavery.) To render slaves invisible in this interpretation is to dehumanize millions of persons who were deemed as property. He had also dehumanized Wilson when he had called her an empty barrel. Instead of treating her as a person worthy of his respect, he had characterized her as an object worthy only of contempt. I know nothing about the “long tradition of empty barrels,” but I do know about the long tradition of oppressing slaves and other persons of color.

Besides the racist tendency to erase people of color from the pages of history and the realm of politics, Kelly also showed a disrespectful attitude toward Wilson as a woman in that interview. Why should he ever apologize to her? She is only a woman, and in the good old days people like her knew their place.

The empty barrel insult, then, is a profound example of how society tries to silence women—especially outspoken ones. In medieval Europe, villagers would force such women to wear scold’s bridles. Also called a brank, this metal contraption covered a woman’s face and prevented her from talking. The villagers would parade the “scolds” through the streets to be pelted with vegetables and spat upon.

Kelly and others are trying to silence Wilson with a metaphorical scold’s bridle. Just last week, a radio host called Wilson a “cheap sleazy Democrat whore.” Calling female politicians names like these, of course, has nothing to do with alleged sexual behavior and everything to do with the Biblical story of resisting the evil Queen Jezebel. Perhaps this is related to Kelly’s nostalgic reference to the time when women were sacred—and not meddling in politics.

By trying to discredit Wilson as a witness to the phone call, Kelly and his allies also refuse to honor her as a Congressperson. The video of the building ceremony clearly shows that Kelly had lied and has no credibility in this matter. However, the truth can have less power when it is on the side of an African American woman than a white male in a general’s uniform.

Besides attacking her credibility, Kelly also tried to strip Wilson of her insider status as a Washington politician. Kelly firmly categorized her as the Other when he used the word “sacred” regarding military matters. By listening in on the President’s call, this civilian had allegedly violated a moral code. and intruded into a restricted place (although she had been invited to listen to the call.) This woman then had the nerve to call out the Commander-in-Chief instead of acknowledging her proper place.

Wilson, then, is anything but an empty barrel but a citizen who had spent years in community building before entering Congress. With this insult, Kelly had tried to dismiss every achievement, every speech of Wilson’s as completely meaningless. Another aspect of the siling of women is the invisibility of women’s accomplishments, which Kelly tried to invoke. Nobody—especially Wilson—deserves this erasure of her years of hard work.

Although it was depressing to see Kelly attempt to put a scold’s bridle on Wilson, the good news is that she is refusing to put it on. The public rejection of any efforts to silence her is heartening for anybody who respects the dignity of all persons. Kelly had claimed that Wilson was a liar and the Other—but his scorn has only amplified the power of this outstanding woman.