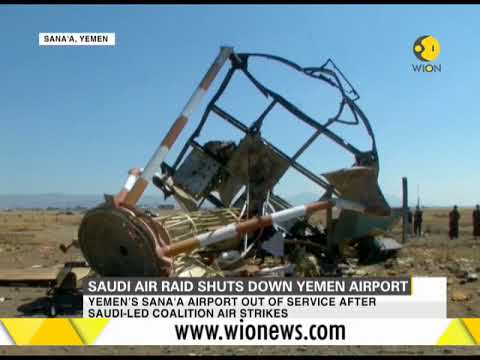 A Houthi statement said that the attack “is an explicit violation of international covenants and treaties, which stipulate that civilian airports are not targeted.”

The U.S. and U.K.-backed Saudi coalition carried out a bombing attack on the civilian airport in Yemen’s capital Sana’a on Tuesday, further cutting off crucial relief shipments to a country on the verge of catastrophic famine due to the coalition’s near entire blockade

An air strike damaged parts of the runway and navigation equipment, at an airport used to deliver life-saving United Nations aid.

The coalition said last week it had closed all air, land and seaports in Yemen. The war on Yemen has led it to the brink of famine, with massive shortages, and cholera epidemics tearing through the country’s civilian population.

“This attack is intended to cause maximum damage and deprive millions of Yemenis from receiving life-saving food and medicines,” a Houthi official said to Al Jazeera.

A Houthi statement said that the attack “is an explicit violation of international covenants and treaties, which stipulate that civilian airports are not targeted.”

The United Nations has also condemned the brutal blockade, saying that without all ports and airports fully functioning, the situation will progress toward one of the more severe famines in recent history.

U.N. spokesperson Stephane Dujarric urged the coalition on Tuesday to open all ports and airports immediately.

“The continued closure by the Saudi-led coalition of critical seaports and airports is aggravating an already dire humanitarian situation. I think it poses a critical threat to the lives of millions who are already struggling to survive,” U.N. humanitarian coordinator for Yemen, Jamie McGoldrick said.

The coalition has attempted to justify their actions by saying that the blockade is necessary to prevent supposed Irani arms from getting into the country to the Houthi rebels. Iran has consistently denied these claims.

The kingdom, along with other allied states and Western material backing, has waged a war on Yemenis since 2015 when the Saudi-allied President Abd-Rabbu Mansour Hadi was overthrown.

Saudi Arabia is one of the largest purchasers of United States and United Kingdom produced arms.