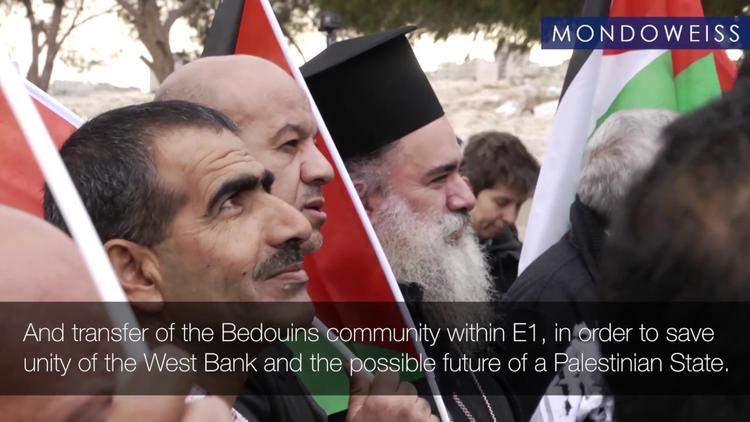 The Bedouin community in al-Baba Mountain, in the town of Al-Eizariya, occupied East Jerusalem, stands steadfast in face of Israeli plans which aim to evict them.

According to Al Ray Palestinian Media Agency, not even the children are willing to wave their rights, repeating that al-Baba Mountain is “our land and we will still here.”

The Bedouin resident Khaled al-Basha, 45, said that they were shocked with the Israeli decision to evict the community as a whole.

Al-Basha described the decision as unjust and merciless.

The Israeli civil administration notified the community 10 days ago, of their impending eviction from their houses in Al-Eizariya, where 57 Palestinian Bedouin families (with a total of 300 members) reside.

The chairman of the Committee of Services of al-Baba Mountain, Attallah Mazarah, warned of the eviction order, which seeks to deport the entire community. He added that Israeli occupation authorities have already demolished some houses in the community, but the decision now states the intention to evict all.

He stressed that the inhabitants of Al-Baba, along with all Bedouin communities, will not accept a new deportation from their lands.

A lawyer of the community filed a petition with the Israeli civil administration, against the decision, last Wednesday, but the administration did not respond.

Mazarah called on the Palestinian Authority to adopt a strict stance against the Israeli policy.

An official from the Coalition for Palestinian Rights in Jerusalem, Zakaria Ouda, said that the new Israeli measures in al-Baba are a part of the same old scheme which aims to evict the Bedouin communities, and to establish E1 settlement, which will include 12,000 settling units.

Ouda explained that the bigger plan seeks to connect 8 settlements in occupied Jerusalem, separating the northern parts of the West Bank from the south. The plan will, n effect, evict and isolate many Palestinian neighborhoods.

“It is part of the Israeli plans that are named by the Israeli occupation government as ‘Greater Jerusalem’, whose borders extend to the settlements of Gush Etzion in the south, Ma’ale Adumim to the east, and Giv’at Ze’ev in the north,” he said.

This is reportedly part of a major plan aimed at adopting the policy of ethnic cleansing within Jerusalem’s Palestinian population, in order to create a Jewish majority.

Oudah called on the Palestinian Authority to make use of its relations with other countries to stop this plan, and to exert pressure on Israel to end policies which seek to expel Palestinians from occupied Jerusalem.

The National Office for the Defense of Land and the Resistance of Settlements also warned of the plans for settlement and displacement in Jerusalem.

It was explained, in a documentary report issued Saturday, that the plan of evicting the Bedouin communities is one of the most dangerous ethnic cleansing plans in occupied Jerusalem.

The report stated that, if the Israeli occupation succeeds in evicting the Bedouin community, it will be able to isolate Jerusalem totally, from its Palestinian connection.

The Beduoin communities in occupied Negev were displaced from their lands in Tal Arar, Negev, in 1948, and have been residing in Palestinian lands near occupied Jerusalem. He noted that there are aerial photographs from the 1960s and 70s which prove their presence in al-Baba Mountain and all the Bedouin communities.

Israeli occupation authorities built the apartheid wall in 2003, leading to the reduction of livestock and water sources upon which the Bedouin community of al-Baba Mountain relied .

The demolition process has been raging in al-Baba compound for the last four years, reaching 52 demolitions, including a kindergarten, and involving the confiscation of residents’ vehicles, preventing them from renovating their homes and any expansion of the population.

The Israeli Civil Administration offered the residents of Jabal al-Baba material temptations to transfer to them the so-called “Jerusalem Gate” on the land of Abu Dis residents, but they were refused. The last attempt was about a month ago, when Israeli forces demolished four houses and tried to get signatures from the population, to find an alternative for them. But, the citizens refused, and, so, Israeli authorities began issuing eviction orders and deportations for the entire community.