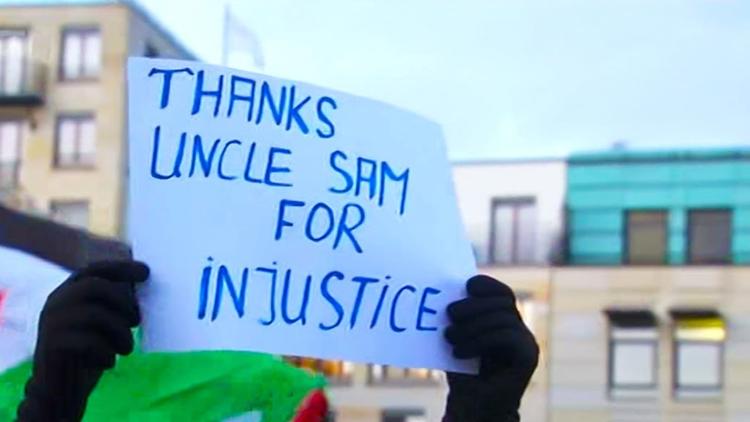 Christian Palestinians, along with Muslims, held a protest in front of the historic Church of the Nativity, after Sunday prayers, to express their rejection of US president Donald Trump’s decision to consider Jerusalem to be the capital of Israel.

The protesters assured that they would not meet with Trump’s second in command, Vice President Mike Pence, because of the US administration’s pro-Israel positions.

Participants raised Palestinian flags and slogans, in both English and Arabic, denouncing the decision on Jerusalem and warning against the vice president’s visit to the city.

George Zina, who spoke on behalf of Palestinian factions, the Follow–Up Christian Committee, and Christian institutions in Bethlehem, stressed the popular position which rejects the visit to the city, which carries for them a meaning of war and aggression.

Zina added that Trump’s decision harms both Palestinian Christians and Muslims, and that the US president has no right to forget the religious and historical significance of the city, or its indigenous inhabitants.

He stressed that the decision is in violation of international laws and conventions, and will not change the Christian and Islamic reality of the city.

He called on the international community to challenge this arrogance, and to pressure Trump to withdraw his decision, adding that the Christians of the city are not welcoming of the visit, either.

He said: “We will receive [the] US vice president with shoes and more.”

He said that Pence was unwelcome and would be expelled from the city.

“In the name of Fateh, I say that we will not welcome Trump’s deputy in the Palestinian Territories.

“He asked to meet (Abbas) on the 19th of this month, in Bethlehem; such a meeting will not take place,” Jibril Rajoub stated.

In response to the reports of Palestinians not welcoming Mike Pence, a spokesperson for the vice president said that, by refusing to meet the latter during his upcoming trip to the region, the Palestinian Authority (PA) was turning its back on a dialogue about the future of the Palestinian-Israeli conflict.

Pence is expected to visit the region later this month. He is set to travel to Israel and to the West Bank city of Bethlehem, PNN reports.

It was not clear what Rajoub’s remarks meant for the West Bank portion of Pence’s trip, but Politico recently reported that Pence “still intends to meet with Abbas and Palestinian leaders and thinks any decision to pull out of the meeting would be counterproductive,” according to a White House official.