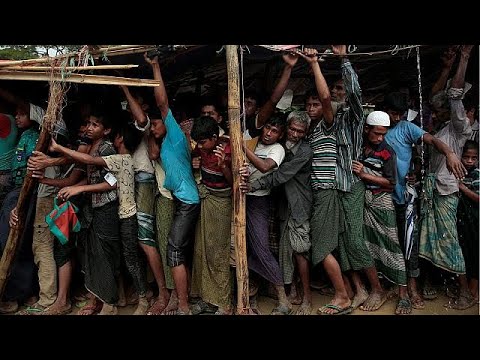 An estimate from Doctors Without Borders shows that at least 6,700 refugees have been killed during the first month of militarized persecution.

At least 730 Rohingya children under the age of five have been mercilessly slaughtered by Myanmar police forces in an almost six-month crusade against the Muslim community, Doctors Without Borders reports.

Following a series of surveys, the humanitarian agency concluded that of this figure, 59 percent of the children were shot, while 15 percent burned to death in their homes, 7 percent succumbed to beatings and 2 percent were killed by landmines.

A conservative estimate from Doctors Without Borders shows that at least 6,700 refugees have been killed throughout the course of the first month of militarized persecution. This figure far exceeds official statistics which present a death toll of 400.

“The numbers of deaths are likely to be an underestimation, as we have not surveyed all refugee settlements in Bangladesh and because the surveys don’t account for the families who never made it out of Myanmar,” said the French Division of Doctors Without Border’s medical director, Dr Sidney Wong, describing the hundreds of families trapped by soldiers as their homes were set ablaze.

The report says that between August 25 and September 24, the average mortality rate registers 8.0 deaths per 10,000 people, approximately 2.26 percent of the over 600,000 interviewed. Based on the organization’s six surveys distributed in the Bangladeshi refugee camps scattered throughout the Cox Bazar, it would imply that somewhere between 9,425 and 13,759 Rohingya died since the beginning of what UN officials refer to as an ethnic cleansing.

“What we uncovered was staggering, both in terms of the numbers of people who reported a family member died as a result of violence, and the horrific ways in which they said they were killed or severely injured,” Wong said.

The surveys show that a total of 71.7 percent of the 9,000 Myanmar refugees dying from violent causes. Of these, 69 percent of the Muslim group were killed by gun-related injuries, 9 percent burned and five percent were beaten to death.

Despite reports from journalists, reseahers and both social and human rights groups, Myanmar officials continue to deny allegations of a genocide.

International media report two Reuters journalists are being held by Myanmar officials in connection to their coverage of the Rohingya crisis.. Burmese officials have confirmed the Tuesday arrest, adding that police officers involved in the journalists’ investigations have also been detained for questioning. Dozens of journalists continue to report on the thousands of Rohingya who continue to be tortured, killed, raped and robbed.

“Currently people are still fleeing from Myanmar to Bangladesh and those who do manage to cross the border still report being subject to violence in recent weeks,” the doctor added. “With very few independent aid groups able to access Maungdaw district in Rakhine, we fear for the fate of Rohingya people who are still there.”

Since August, more than 647,000 Rohingya refugees have fled Myanmar, Inter-Sector Coordination Group reported on December 12. Researchers say that 60 percent of the refugees are traumatized children.