Late last month the Kurdistan Worker’s Party – an organization some describe as terrorist – declared a region of self-rule in the Qandil mountains. Strangely enough, nobody seems all that upset about their claim.

The road into the Qandil mountain area run by the PKK.

Only eight kilometres from the last checkpoint out of the semi-autonomous northern region of Iraqi Kurdistan, one encounters the first security checkpoint run by another Kurdish authority. The Kurdistan Worker’s Party, or PKK, declared that they would form a brand-new region in the Qandil mountains, on the border with Turkey and Iraq. And when one crosses the line into that area it does feel a little like entering another country, even though strictly speaking, both are still part of Iraq.

The often-controversial PKK has been fighting for Kurdish independence and rights in Turkey for years, in an ongoing conflict that has seen tens of thousands of both Turkish and Kurdish deaths. In fact, the PKK is categorised as a terrorist organisation by some Western nations. Nonetheless here, in the area the group refer to as Hareme Media, the PKK are in charge.

Late last year, on December 23, the PKK announced that they would take control of the Qandil area and elected a council to administrate the area.

“Administratively speaking, the area is under the control of the Iraqi Kurdish authorities and we cannot accept any other kind of status outside of this framework.”

Behind the first checkpoint there is a large mural of PKK leader, Abdullah Ocalan, who has been in a Turkish prison since 1999, and who is almost a figure of worship for the group. The self-governing region here works in a similar way to the Kurdish-dominated area in Syria that is run by an offshoot of the same group.

In a statement on the creation of their new “region”, the PKK said they had made the move partially because “the ruling regime in southern Iraqi Kurdistan was negatively impacting on the lives of people in Qandil”.

The PKK has used the Qandil area, a triangle in between Turkey, Iran and Iraq, as a base for years. The Turkish military often make incursions into the area to raid the PKK. Some PKK members boast that the Qandil area is almost the same size as Lebanon.

On the whole the highest authorities in Iraq, both in Kurdistan and in Baghdad, have been making fairly mild-mannered complaints about the PKK’s declaration of self-rule but it seems unlikely that anyone will do anything much about it in the short term.

“The PKK didn’t discuss this issue with us and it doesn’t listen to what we have to say,” complains Mohammed Watman, a senior member of the PUK. “It is doing what it wants, regardless of the PUK’s opinion.”

Other local authorities in the area also have doubts.

“We don’t have any sort of relationship with the officials in Qandil now and we didn’t in the past either,” says Hiwa Qarani, an official in the Raniya area and a member of the PUK, adding that the declaration of such a region is illegal and unconstitutional in Iraq and in Iraqi Kurdistan.

It is possible to become a region in Iraq but there are certain procedures that need to be undertaken to make an area such a legal entity. None of that happened in Qandil.

Still, up until now the Iraqi Kurdish regional government has not reacted to this illicit formation of a new region. Kurdish politicians’ relationship with the PKK are complex, to say the least.

“Administratively speaking, the area is under the control of the Iraqi Kurdish authorities and we cannot accept any other kind of status outside of this framework,” says Ali Hussein, a spokesperson for the KDP. “What the PKK has done is unconstitutional.”

The PKK has a different take on this, considering the matter to be more about administration than politics. 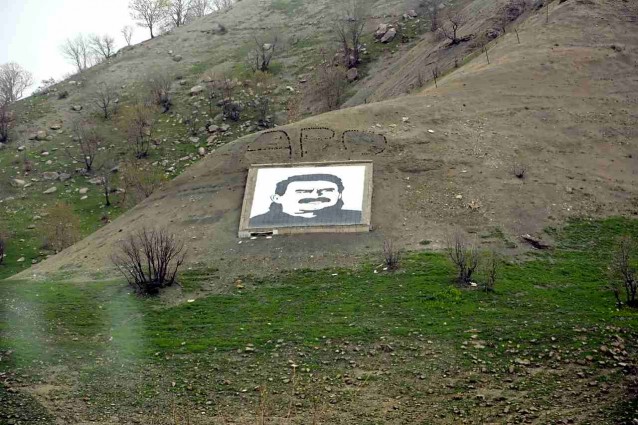 Behind the first checkpoint going into Qandil there is a large mural of PKK leader, Abdullah Ocalan.

The PKK has some experience when it comes to creating its own self-ruled regions. Syrian offshoots declared a kind of autonomous region in Syria, after civil war broke out there and sought to repeat that again in Iraq’s Sinjar district, where the population is mostly Yazidi. The Sinjar area borders on the Syrian Kurdish areas they run – although the Syrian defence Forces, who are present in that area, have also tried to distance themselves from the PKK.

“We are not forming cantons in the same way as those in Sinjar,” Sarhad Varto, the spokesperson for the Union of Kurdistan Communities, or KCK, told NIQASH; the KCK is a kind of organizing authority associated with the PKK. “The Qandil area is part of southern Kurdistan and the people of this area have simply formed a council so they can administrate their own affairs and address their own problems. It is not a political project and we are not taking away the land of Iraqi Kurdistan.”

The Iraqi Kurdish authorities in the area had been helping the people of Qandil with state services and the like, but then they stopped, Varto explains. “That’s why we have taken this step.”

This does seem likely, given the deterioration in state services in Iraqi Kurdistan, thanks to a long-running financial crisis and an increase in political conflicts there. It also offers a good opportunity for the PKK to show off its own way of running a regional administration, making it look like a better method than others. The PKK practice a political and social ideology they call democratic confederalism and Qandil offers another chance to demonstrate it in action, especially in the light of recent anti-government demonstrations elsewhere in Iraqi Kurdistan.

Both scenarios are quite possible, says Arian Rauf, a lecturer in political science at the University of Garmian in Kalar. “The PKK wants to repeat the cantons experiment while there is a security vacuum in Iraqi Kurdistan and it also wants to show it can provide an alternative when chaos happens.”

Nonetheless the authorities in Iraqi Kurdistan are unlikely to be impressed. “Forming the Qandil region is a violation of existing laws and the Iraqi Constitution,” Nazim Kabir Harki, vice-chairman of Iraqi Kurdistan’s regional committee of the interior and a member of the KDP, told NIQASH. “no region can be formed inside another region. It is simply unacceptable.”

Harki said that the Iraqi Kurdish authorities would deal with the situation according to existing laws.

However, local observers believe that any action may take some time, if it happens at all. “On an internal level, this region won’t be a problem for the PUK, which has tended to have good relations with the PKK,” Raouf explains. “The problem will be with the KDP which has better relations with Turkey.” And the Turkish government consider the PKK a terrorist organization bent on bringing down their government and fomenting Kurdish rebellion.

Meanwhile the government in Baghdad has not had much to say about any of this. Raouf believes the federal government has a good reason for keeping quiet. “Baghdad doesn’t mind seeing centres of power multiply in Iraqi Kurdistan because this weakens the Kurdish administration,” the political studies lecturer notes. “At the same time, it wants to use this as leverage against Turkey. That’s why Baghdad is keeping quiet.”