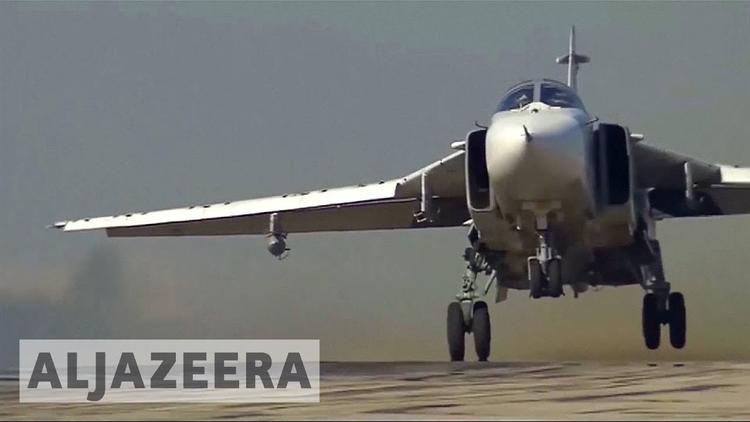 The Syrian war limps along at the margins. It is over where it matters but continues in key demographic pockets. The two most significant are East Ghouta near the al-Assad-held capital of Damascus and the province of Idlib in the northwest of the country. East Ghouta probably has some 380,000 people, who are under siege from the regime because the suburb is controlled by rebels. Idlib province probably has about 1.5 million people, i.e. it is similar to Maine or New Hampshire.

The supporters of the rebels in these remaining pockets include Turkey and the Gulf states, and perhaps France and some other European countries (but not the EU as a whole and especially not the Czech Republic).

Despite Trump’s one-off firing of missiles at the Shuayrat base near Khan Shikhoun over the regime’s use of chemical weapons last spring, the US appears to have ceded Syria or at least the populated West Syria portion, to Russia. Most of the rebel guerrilla forces have signed up for the Salafi or hard line Muslim fundamentalist ideological line, making them unsympathetic to a Western audience. Some have had relationships with terrorist groups such as al-Qaeda (to the distress of Gulf patrons, who tried to get them to cut that out). Many of the actual residents of Idlib, however, are just Sunni small town or farming families, not very ideological, who don’t deserve death from the skies because some guerrillas have taken over their area.

The Syrian war is over as a matter of sheer military strategy. There is no viable pathway for the rebels to overthrow the Damascus government. Supported by Lebanon’s Hizbullah, Iraqi Shiite militias, and Afghan cannon fodder Shanghaied by Iran on the ground and by the Russian Aerospace Forces in the air, the Syrian Arab Army has reasserted itself in much of the country, even if weakly.

The only real question is whether the regime will simply reconquer East Ghouta and Idlib, or whether these holdouts can get a better deal than that. The Russians keep holding out the prospect of a better deal in their negotiations with the rebels. The al-Assad regime seems intent on reconquest.

A cease fire was supposedly reached with East Ghouta last fall and it was designated a ‘de-escalation zone’ by Russia, Turkey and al-Assad. But fighting continues. East Ghouta is dominated by Saudi Arabia’s proxy, the Jaysh al-Islam or Army of Islam, hard line fundamentalists who have threatened to massacre Shiites and impose a Wahhabi-like government on Syria, akin to that in Saudi Arabia. Regime shelling and bombing of rebel positions in East Ghouta for the past two weeks is indiscriminate. The Syrian Arab Army and its allies take no care to avoid civilian casualties. Hence they have been killing about 7 children, women and noncombatant men every day for the past two weeks. The Syrian government is within its rights to fight rebels near the capital according to international law. It isn’t within its rights to hit bakeries while ordinary folk are buying bread. This tactic of total war, also used by the Saudis in Yemen and by the Israelis in Gaza, really must be fought by those hoping for a world of laws.

Idlib is also a deescalation zone. It is dominated by Salafi fundamentalists grouped in the Syrian Conquest Front, composed mainly of the old Nusra Front, the al-Qaeda affiliate, now branded the Council for Syrian Liberation, and the Freemen of Syria, also Salafis but representing themselves as more flexible. Nusra/Council have asserted themselves politically, virtually dismantling the other groups, and, Nabih Bulos of the LA Times reports, giving rise to charges that they have deeply weakened the province’s defenses. Turkey and the Gulf have tried to put a security umbrella over Idlib to forestall a frontal regime conquest of the sort al-Assad undertook in east Aleppo.

But one corner of Idlib province has a road running through it from the largest Syrian city, Aleppo, down to the capital of Damascus, and the regime wants that road open. So the Syrian Arab Army and its auxiliaries have attacked the Idlib rebels holding a military base near the road, and reportedly are holding part of the base, which they had lost to the rebels in 2015.

The wider Idlib offensive isn’t just about the base or the Aleppo-Damascus road; rather it appears that al-Assad intends to mop up and take Idlib entirely. Pro-Damascus forces have taken hundreds of square miles recently, sparking an exodus of 130,000 new refugees toward the Turkish border (rugged, frigid territory this time of year).

Turkey is furious about the reneging on the de-escalation zone pledge. Russian air craft have taken damage at their base in neighboring Latakia province from rebel drones, giving them a reason to want to clear out the nearby rebels.

It would be better if there were a negotiated end to the war in which the regime felt that it had to make some concessions with regard to its Stalinist one party state form of rule. The Syrian government tortured 10,000 prisoners to death and documented it with photographs that leaked. It is a horrible regime and guilty of crimes against humanity. That it should come back full force from the popular challenge mounted to its Draconian rule is unfortunate.

But, Syria seems headed in the direction of Algeria, another authoritarian state that survived an attempt at revolution and then a civil war. Of course Algeria has oil. But Syria gets billions in strategic rent. Apparently these authoritarian oligarchies can limp along, despite having been weakened, for decades.