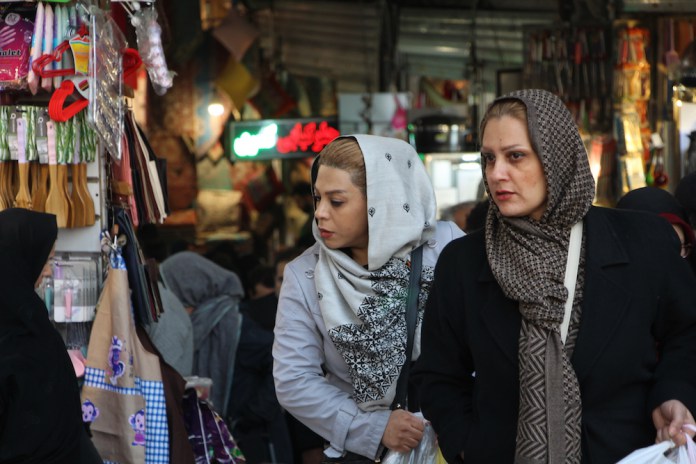 During a recent reporting trip to Iran, I interviewed almost two dozen people at random in both rich and poor neighborhoods of Tehran. All the middle and upper-middle class people I spoke with said the government of President Hassan Rouhani had made economic progress, although not as much as they wanted. All the working-class Iranians said they had seen no economic improvements since Rouhani’s election in 2013.

Starting in late December, spontaneous protests broke out among young, working-class Iranians. While hundreds demonstrated in Tehran, tens of thousands demonstrated in eighty towns and smaller cities. To date, the government has arrested an estimated 1,000 people and twenty-two have died. The 2009 Green Movement mobilized much larger crowds but attracted mostly intellectuals and other middle-income folks.

The International Monetary Fund estimates that Iran’s economy will grow 4.2 percent by March. But, just as in the United States, very little of the country’s wealth trickles down.

A construction worker told me he has no regular place to live while working in Tehran. Sometimes contractors provide refurbished shipping containers as living quarters. Sometimes he stays with relatives. He blamed Iran’s economic problems on the economic sanctions imposed by the United States. He also blamed the Iranian government for wasting billions of dollars on wars in Syria and Iraq.

“First you have to feed your own people and then go around helping others,” he told me. He criticized widespread Iranian corruption. When the Revolutionary Guard builds projects, for example, workers often don’t get paid on time and then the officers say, “Oh, we spent the money in Syria or Iraq.”

But many other Iranians, while critical of corruption, are not willing to break with the Rouhani government. Tens of thousands of people participated in pro-government marches on December 5 as hardliners blamed the United States and foreign powers for the unrest.

Back in the United States, President Donald Trump has sought to use the protests to justify his aggressive policies.

He tweeted, “Such respect for the people of Iran as they try to take back their corrupt government. You will see great support from the United States at the appropriate time!”

But Iranians don’t believe Trump supports them. In my numerous, random interviews, I did not encounter a single person with anything positive to say about Trump. They opposed his ban on Iranian travel to the United States, his declaring Jerusalem as the capital of Israel, and his efforts to cancel the nuclear accord.

Iranians worry that Trump will use the anti-government protests as an excuse to abrogate the nuclear agreement.

In 2015, the United States, Iran, and five other countries signed an internationally binding agreement, ratified by the U.N. Security Council. Iran agreed not to develop nuclear weapons. In return, the United States and European countries were supposed to lift harsh economic sanctions.

Iran has lived up to its end of the bargain. It poured concrete into a major nuclear reactor, shipped enriched uranium out of the country, severely reduced the number of centrifuges used to enrich uranium, and allowed intrusive inspections at all its nuclear facilities. The International Atomic Energy Agency has verified that Iran has no nuclear weapons program.

Nevertheless, last October Trump decertified the agreement, a unilateral move rejected by all the other signatories: Britain, France, Germany, Russia, and China. Trump is seriously considering re-imposing sanctions, using the Iran protests as an excuse.

So what is Iran going to do? Iranian officials are considering options ranging from stepped-up diplomacy to military confrontation, according to Iranian foreign policy experts and high government officials in Iran.

“When Trump became President, I think this was a big shock for the Rouhani administration,” Foad Izadi told me. Izadi is an assistant professor at the North American Studies Department at the University of Tehran. Rouhani’s supporters hope Trump will “be impeached before he can cause more damage. And if that doesn’t happen, they are hoping that Trump’s advisers will tell him that agreement is actually good for the United States.”

Rouhani, a political centrist, wants to see less confrontation with the West and greater foreign investments. His camp advocates robust diplomatic efforts against Trump, trying to take advantage of fractures within the US administration. Secretary of State Rex Tillerson has taken a softer line, arguing the administration must insure that Iran lives up to the agreement. The heads of intelligence agencies and the former generals now populating the White House, on the other hand, advocate a hard line against Iran.

“The reformists don’t want to provoke the US,” said Noroozpour, and hope pressure from European allies will restrain Trump.

By contrast, the conservative camp, known in Iran as principlists, advocate a series of escalating actions that would not violate the nuclear accord but would nonetheless send a message to Washington.

The principlists “emphasize a new alliance with Russia and Turkey,” Noroozpour explained. “Principlists believe this alliance can force the US to get out of the Middle East.”

The principlists insist that Iran can reinstitute its nuclear engineering and science programs at universities, which have languished over the past few years. Also, under International Atomic Energy Agency rules, Iran can enrich uranium up to 20 percent for medical research. Iran could enrich uranium to even higher levels as part of plans to develop nuclear powered submarines. But Iran currently has no nuclear subs.

Professor Izadi told me that, as a sign of even stronger resistance, some principlists want Iran to withdraw from the decades-old Treaty on the Non-Proliferation of Nuclear Weapons, which Iran ratified back in the 1960s. Conservatives argue that the treaty allows western spies to enter sensitive Iranians military bases under the guise of snap inspections.

These principlists say, according to Izadi, “The benefits of NPT have not materialized for Iran.”

But that doesn’t worry some principlists, according to a high-ranking government official who asked to remain anonymous. “Some principlists now advocate confrontation with the US,” he said. Iran wouldn’t directly attack the United States, but would utilize allies in Syria, Lebanon, Iraq, and Yemen.

“We can bother the US around the world,” he said confidently. “We have nothing to lose. The negotiations were important for our national dignity. We will not be humiliated.”

Let us hope saner voices prevail on both sides.

Reprinted with author’s permission from 48hills.com)