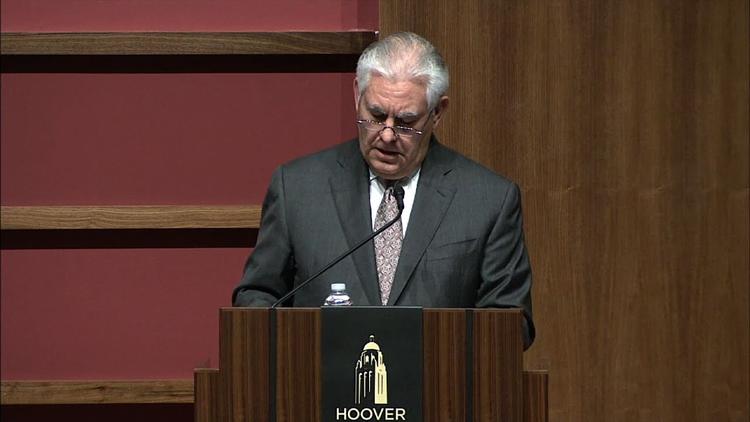 Secretary of State Rex Tillerson gave a talk Wednesday at the right wing Hoover Institution that hovers over Stanford University, in which he committed to a Forever War in Syria. The talk was a mishmash of incompatible talking points and full of inaccurate and tendentious assertions, but its most troubling feature was the determination to keep US troops in Eastern Syria over the long haul.

Some 60% of career diplomats have fled the State Department in the past year, as Tillerson seems intent on destroying the institution he leads. The lack of any real expertise on Syria is obvious in his erroneous talking points.

Tillerson laid out five strategic goals in Syria, what he called “end states”:

First, ISIS and al-Qaida in Syria suffer an enduring defeat, do not present a threat to the homeland, and do not resurface in a new form; that Syria never again serves as a platform or safe haven for terrorists to organize, recruit, finance, train and carry out attacks on American citizens at home or abroad or against our allies.

Second, the underlying conflict between the Syrian people and the Assad regime is resolved through a UN-led political process prescribed in UN Security Council Resolution 2254, and a stable, unified, independent Syria, under post-Assad leadership, is functioning as a state.

Third, Iranian influence in Syria is diminished, their dreams of a northern arch are denied, and Syria’s neighbors are secure from all threats emanating from Syria.

Fourth, conditions are created so that the refugees and IDPs can begin to safely and voluntarily return to Syria.

And fifth, Syria is free of weapons of mass destruction.

The problem is that most of these goals cannot be attained at all, and several of them can be attained only if others are not.

The United States only has some 2,000 special forces operatives in eastern Syria, which is not a big enough force to police the country against rump ISIL cells. US troops are embedded with the leftist Kurdish YPG militia, which is friendly to the US at the moment and hates ISIL, and which has done the heavy lifting in defeating ISIL in Raqqa Province (along with contributions to its south in Deir al-Zor from al-Assad’s Syrian Arab Army). The YPG can be depended upon to fight ISIL wherever it crops up, but only in areas adjacent to its population and power base in the Jazira, of northeastern Syria.

Since the al-Assad regime has won the civil war, it does not feel it needs to make a grand political compromise with the rebels, who only have three significant pockets of resistance left: Idlib Province in the north, the East Ghouta neighborhood in the vicinity of Damascus, and Deraa south of the capital. All together, these three account for about 2 million people. The YPG Kurds of the north and northeast constitute another 2 million, but they are not rebels against the regime per se and probably would be willing to rejoin Syria if it were reformulated as a federal state with substantial states’ rights. They also now rule over about a million Arab Syrians in Raqqa. So the remnants of the rebels rule about 11 percent of the some 18 million Syrians still inside the country. The YPG Kurds have about 16 percent of the population. That is 27%. Let’s say there are rebel pockets amounting to another 3%, giving the regime 70% of the population. Tillerson says Damascus only rules half the territory, but that statistic is irrelevant since the eastern desert is thinly populated It is like the US government losing control of Wyoming, which is a big place but, no offense, few people live there. And remember that the 11% that is Kurds, while they are not under government control, have been willing to cooperate with the Syrian Arab Army against the Arab fundamentalists and would likely do a deal with Damascus if the US left.

Not only does the al-Assad regime have 70% of the population (and potentially 81%), but it has all the major urban centers that account for most of the economy–Aleppo, Hama, Homs, Latakia, and Damascus. It has the major port, Latakia, and can blockade rural hinterland pockets in Idlib and Deraa.

Tillerson’s depiction of the al-Assad regime as having only half the cards is simply incorrect, and it leads him to over-estimate the strength of the American hand. Al-Assad does not have to go under these circumstances, and will not. In fact, the survival of the Idlib, East Ghouta and Deraa pockets is in serious doubt. Over 120,000 people have fled north toward Turkey from the current Idlib campaign just in the past month.

The United States has no lever to reduce Iranian influence in Syria.

Syria does not have weapons of mass destruction. The Russians helped sequester or destroy most of its chemical weapons, which is what this weaselly term means. It still has a small storehouse of sarin gas, about which the US probably can do nothing. Where the regime uses it in mopping up rebel pockets, as it did last spring, the Trump administration has shown that it will intervene with missile attacks. These strikes, however, had no follow-through and are relatively ineffectual.

As for the return of the Syrian refugees in Jordan, Lebanon, and Turkey, that process has already begun as the al-Assad regime has reestablished control over much of the economically productive parts of the country. Several thousand refugees have returned from Lebanon in the past three months.

What will interfere in that process is the US keeping the pot boiling by promoting continued instability in Syria.

I can’t go into all the contradictions in this policy. Tillerson names al-Qaeda in the northwest as another target for US intervention. But complains about the regimes operations against the al-Qaeda affiliate there! When attacking the Damascus regime, Tillerson lionizes the rebels who rose up against it. But he downplays that some of them became extremists except when casting about for some reason to stay in Syria.

Tillerson tried to mollify Turkey, but did not really address Ankara’s outrage about his plans to create a permanent 30,000 strong US-armed Kurdish militia in Syria. He said that this plan has been overblown in the press, and simply aims at training Kurds to patrol the border with Iraq and prevent ISIL from returning. But if he is planning to train and arm 30,000 such border police, well, that is precisely what Turkey was complaining about.

The Trump administration is playing an extremely dangerous game here. Those US troops in eastern Syria are sitting ducks if Turkey turns on them. They are far from any support base (if you exclude Incirlik in Turkey, Baghdad’s Command, with only 6,000 troops, is the closest). They are surrounded by hostile forces–Hizbullah, Iranian Revolutionary Guards, the Syrian Arab Army, Iraqi Shiite militias, and potentially the Turkish army and intelligence. And no one among the neighbors with the possible exception of Baghdad wants them there.

This policy is a mishmash, and premised on fake statistics and contradictory goals.