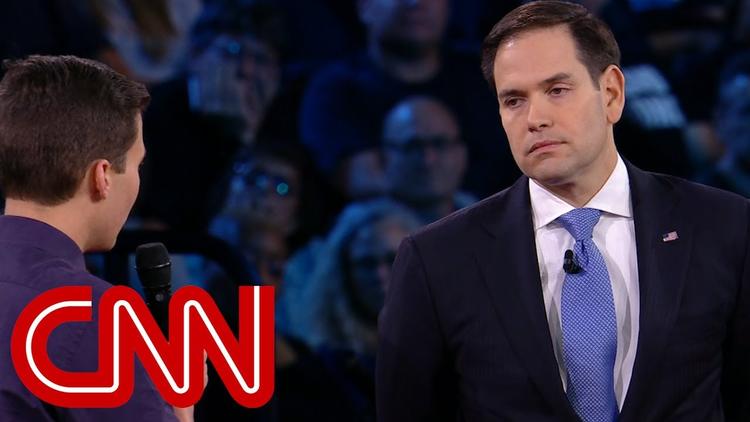 The event, hosted by CNN, offered a rare opportunity for people directly affected by the Marjory Stoneman Douglas High School tragedy to confront the pro-gun lobby.

The event, hosted by CNN, offered a rare opportunity for people directly affected by the Marjory Stoneman Douglas High School tragedy – not just survivors, but also friends and relatives of those who died – to confront key players in the ongoing debate about gun laws in the United States.

Fred Guttenberg lost his daughter, Jamie, during the shooting and was able to challenge Senator Rubio face to face: “Your comments this week and those of the president have been pathetically weak,” said Guttenberg, to a standing ovation.

“Guns were the factor in the hunting of our kids in the school this week. Look at me and tell me you accept it and you will work with us to do something about guns.”

Rubio replied: “I think what you’re asking about is the assault weapons ban. Let me be honest with you about that one. If I believed that that law would have prevented this from happening, I would support it.” The audience booed.

Survivor Cameron Kasky, one of the faces of the emerging student movement promoting gun control in the wake of Nikolas Cruz’s murderous rampage, later asked Rubio if he would be willing to refuse any future funding from the NRA.

Rubio replied that he stood by his views on gun control and rejected claims that being paid thousands of dollars by the NRA dictates his political agenda: “The influence of this group comes not from money; the influence comes from the millions of people that agree with the agenda,” he said.

The senator then tried to distance himself from the NRA’s politics, claiming he would continue to do what he thinks is right, and declaring his support for the second amendment.

“I support lifting the age from 18 to 21 for buying a rifle… that organization is not in favor of that, but I think that’s the right thing to do.

“I don’t know what their position is on teachers being armed, but I don’t think they should be because that’s what I think the right thing to do is.”

Rubio and Loesch both defended current U.S. gun laws on the grounds of the Second Amendment, which reads: “A well-regulated militia, being necessary to the security of a free State, the right of the people to keep and bear Arms, shall not be infringed.”

One of Marjory Stoneman Douglas’ history teachers took the opportunity to challenge the pro-gun lobby on the oft-cited consitutional amendment: “I’d like you to define something for me, because I’ve wondered about it and I want to know: what’s your definition of a well-regulated militia, as stated in the second amendment? And, using supporting details, explain to me how an 18-year-old with a military rifle is well regulated.”

Loesch, the NRA spokeswoman, answered by first saying that no one should go through what the history teacher had gone through, before moving to defend her position.

Loesch then quoted Constitutional Convention member George Mason, saying “the militia is the whole of the people” and interpreting “a well-regulated militia” as any “citizen of the United States of America who could operate and service their firearm.”

President Donald Trump was also invited to the event, but declined.

CNN: “Survivor to Rubio: Will you reject NRA money?”