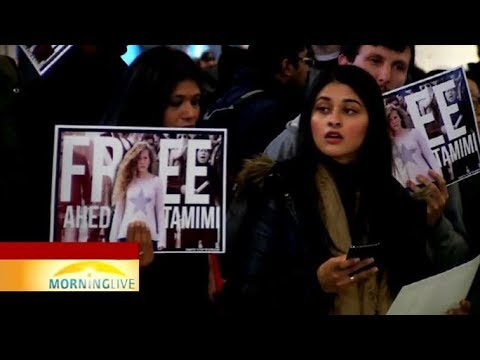 Two left-wing groups in the U.S. organized the letters campaign and protests marking the the 17th birthday of the imprised Palestinian teen.

More than 700 Jewish young people from the U.S. wrote letters of solidarity to Ahed Tamimi, the iconic Palestinian 17-year-old who was arrested by Israeli authorities last month and charged with 12 counts including assaulting an occupation soldier and stone throwing after a video of her slapping a soldier at her home’s yard went viral.

The letters were delivered by dozens of Jewish activists to Ahed’s father Bassem Tamimi at their family home in the West Bank village of Nabi Saleh on Thursday, a day after her 17th birthday, the left-leaning Israeli newspaper Haaretz reported Friday.

One note read, “Dear Ahed, my name is Shula and I am 17. We’re [the] same age and we live in different worlds. Your courage inspires me to stand up for what I believe in. Your actions are not done in vain.”

Meanwhile hundreds if young Jewish activists in the U.S. marked Ahed’s birthday Wednesday by protesting against her detention and show her support ahead of her trial in an Israeli military court next Tuesday. The protests took place in New York, Boston, Washington among other U.S. cities.

The letters and the protest actions were organized by the U.S.-based anti-occupation groups IfNotNow and All That’s Left with the slogan #NoBirthdayBehindBars.

IfNotNow founding member Simone Zimmerman was one of the activists who visited the Tamimi’s home and told Bassem that “Ahed’s story has really moved a lot of people. Of course she’s a symbol, but she’s also just a person who deserves to have the future that she wants to have.”

Also All That’s Left member, Micah Friedman, told Haaretz “It’s particularly important for me as a Jew who connects to this place not just through a political lens but religiously and spiritually, to communicate to Ahed – as a young person whose life’s been shaped by occupation in the name of the Jewish people – that there are Jews throughout the world and living here who don’t believe that the justice system she’s currently dealing with is just.”

While Bassem thanked the activists for their visit and protests, he did point out how Jewish and Israeli activist groups plant olive trees to make themselves feel good, when “it’s freedom, not trees,” that he and his family needs.

She was arrested on Dec. 19 after a video of her slapping an Israeli soldier outside her home in the occupied West Bank village of Nabi Saleh, in mid-December went viral. It was revealed later that the Palestinian girl was upset after soldiers had shot her 14-year-old cousin in the head with a rubber bullet a day earlier.

Ahed has been in the public eye for years. In 2010, as a child, she became an iconic figure of Palestinian youth struggle against the occupation through a photograph in which she stands before a soldier with her fist raised.

Ahed had also made international news few years ago when a video of her, along with female members of her family, went viral showing her fighting an Israeli occupation soldier who was pinning down her 12-year old male cousin.

But the Israeli occupation has been actively persecuting the Tamimi family for decades over their weekly protests against the theft of their lands in favor of the illegal Jewish settlement of Halamish near their villages. Several members of the family have been detained and killed over the years.