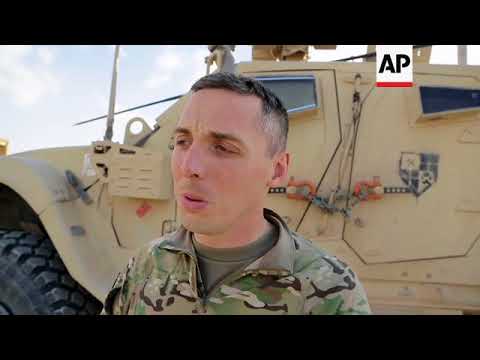 Iraq’s Sunni Muslims are anxiously watching the debate over the presence of US troops in Iraq. Civilians believe they are an important neutralising presence and military personnel want their help and their technology.

On January 27, a friendly fire incident in Iraq’s Anbar province ended in the deaths of eight members of Iraqi security forces. An air raid had been called in, in the town of Baghdadi, and approved by the Iraqi military but had targeted local police by accident. Even though Iraq’s own Ministry of Defence confirmed it had called in the air raid, the incident sparked yet another heated debate about the US presence in Iraq. 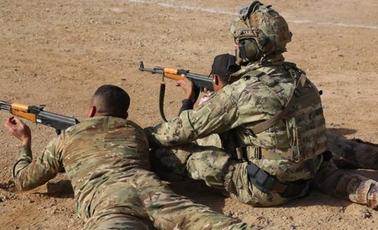 After the friendly fire incident, a number of the Shiite Muslim militias that usually profess more loyalty to Iran than to Iraq, demanded yet again that US troops leave the country.

Several of the militias also made threats against US troops in Iraq. A spokesperson for Hezbollah in Iraq, Jaafar al-Husseini, stated that “confrontation could begin at any time and unlike on previous occasions, mediation will not be successful.”

The day that the US troops leave our cities will be a day celebrated by the remaining IS fighters.

The political representatives of the militias promised to bring up the matter in the Iraqi parliament and to question the government about the topic. And the militias were not the only ones making this call. Several Shiite Muslim-dominated political parties have also asked why the US is still around. “The government needs to clarify the number of US troops present in Iraq and it should specify their departure date,” Mansour al-Baiji, an MP for the major Shiite coalition, asked. “Because if they are planning to stay in Iraq that means there is plan afoot to divide the country.”

The Iraqi prime minister, Haider al-Abadi, has tried to remain neutral on the subject – clearly, he does not wish to arouse the ire of either of Iraq’s two major allies, the US or Iran. But it is most likely to be one of the first really controversial debates that any new Iraqi government has to have, after federal elections are concluded in May. The US itself has said it plans to keep 6,000 soldiers in Iraq, according to the official US government budget.

However there are certainly some Iraqis who really want US forces to stay in the country -and many of them are Sunni Muslims. Sunni-majority areas bore the brunt of the fighting against the extremist group known as the Islamic State, which based itself in those areas due to its ideology being an extreme version of Sunni Islam.

Bu, as a senior Sunni official on Anbar’s provincial council explains, many of the people living in those areas remain displaced or resident in damaged neighbourhoods and they feel that the US troops are a neutral element, one that will prevent the return of the extremist Islamic State, or IS, group as well as stop Shiite Muslim militias from deploying in Sunni cities, under the pretext of maintaining security there.

An Iraqi officer thanks a trainer from the international coalition after a workshop.

“Frankly, the day that the US troops leave our cities will be a day celebrated by the remaining IS fighters,” the official said, speaking to NIQASH on condition of anonymity because of the sensitive nature of the topic. “They know only too well the danger that remotely piloted aircraft pose to them, as well as the threats of an air strike by the international coalition.”

The government in Baghdad is well aware that the IS group didn’t just suddenly appear on Iraq’s borders in 2014, he says. “It had been getting ready ever since the withdrawal of US troops in 2011,” the official notes. “It was then, when the US planes stopped watching the Syrian border, that the terrorists started to infiltrate back into the deserts in Anbar, using valleys for their hidden headquarters, without the danger of being watched – until they could find an opportunity to attack Fallujah and the other cities in this province.”

The US had 160,000 troops in Iraq at one stage with thousands stationed in Anbar’s cities. Despite the manpower, protecting the province’s international border very much depended a full squadron of helicopters to patrol them as well as higher-altitude jets, says Shakir al-Dulaimi, an officer with the Iraqi army deployed in Anbar. Iraq doesn’t have that kind of technology or those resources.

“The IS group knows all about the shelters and roads in the valleys, leading up to Anbar’s large and small cities,” al-Dulaimi explains. “It knows about natural and man-made tunnels and there are also tunnels connecting Syria with Iraq.”

Today the Iraqi army and militias are trying to patrol the 600-kilometre long border area. “But it’s a huge area and they are continuously being attacked,” the officer reports.

Sunni fears are not just limited to the potential return of the extremists. When the IS group took over cities in Salahaddin, the police force there largely disintegrated, with those who stayed to fight facing death or imprisonment and others fleeing for their lives. Of course, some also cooperated with the IS group. The Iraqi government has no confidence in the local police for those reasons – but it is also clear that to ensure security and restore trust in the judiciary, that local forces should be the ones taking care of local security.

That’s going to be difficult though: Salahaddin city, Tikrit, has not been under IS control for over two years now but the security forces there are still not united in anyway. There the Iraqi army, militias, tribal militias and the local police proceed in a random way

“We have real concerns about the continuing presence of the militias in our areas, especially if they are planning to stay for a long time,” a provincial council member in the province of Salahaddin told NIQASH; he spoke on condition of anonymity for security reasons. “This fear stems from an absence of trust between the population and these fighters. We hope that members of the international coalition deployed in the Balad [air force] base will help support our local forces. But training them will take months, possibly even years.”

Meanwhile on the outskirts of Heet, a town in the west of Anbar province, a group of tribal fighters under the command of local man, Abdul Rahman al-Nimrawi, is conducting night sweeps, looking out for IS fighters sneaking back into town. His men have some light weapons from the US but al-Nimrawi would like more.

The IS fighters have tried to get through Iraqi borders ten times already this month, he points out, and it is only thanks to the information provided by the international coalition at the Ain al-Asad army base, via their surveillance aircraft, that his men have even known where to find the extremists.

“The government in Baghdad promised us better weapons and to pay the salaries of our men,” al-Nimrawi continues. “But it has abandoned us. We’ve sent dozens of messages to Baghdad and every time we get the same reply: That the government must deal with a financial crisis first. The US forces at Ain al-Asad are training us and giving us some weapons, with Iraqi government approval. For now, that is better than nothing,” he concludes.