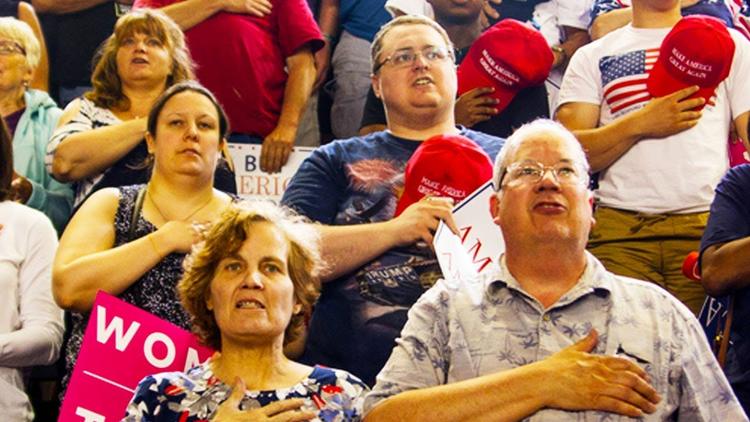 Could “fake news” have helped determine the outcome of the 2016 presidential election?

Social media users and intensely partisan news broadcasts disseminated a massive number of messages during the campaign. Many of these messages demonized candidates and seriously distorted the facts presented to voters. One recent study of nearly 25,000 election social media messages shared by Michigan voters identified nearly half as “unverified WikiLeaks content and Russian-origin news stories” that fall “under the definition of propaganda based on its use of language and emotional appeals.”

What hasn’t been clear, however, is how much of an impact – if any – these “fake news” items had on the outcome of the election. To our knowledge, there have been no empirical studies that have systematically assessed the extent to which believing fake news stories influenced voting decisions in 2016. So, we set out to do one.

We are scholars associated with the Comparative National Elections Project, which is coordinated at The Ohio State University. In December 2016, we commissioned YouGov to conduct a nationwide post-election survey. Our study concludes that fake news most likely did have a substantial impact on the voting decisions of a strategically important set of voters.

Here’s what we learned.

The survey had 1,600 respondents. We focus our analysis on the 2016 electoral behavior of 585 respondents who had voted for Barack Obama in 2012. This strategic subset of voters was selected for two reasons.

First, restricting our analysis to former Obama supporters allowed us to weed out those respondents who were hostile to all Democratic candidates.

Second, if Hillary Clinton had retained the support of Obama voters, she would have most likely won the 2016 election. Instead, just 77 percent of Obama voters supported Clinton. Our survey data show that 10 percent of these former Obama voters cast ballots for Trump in 2016, 4 percent switched to minor parties and 8 percent did not vote.

Our key research question is: What accounts for these defections?

Our survey asked 281 questions, including three false statements best characterized as fake news – two negative statements about Hillary Clinton and one positive statement about Donald Trump. All three were widely disseminated through social media and spread by mainstream and partisan news outlets.

The first is that “Hillary Clinton is in very poor health due to a serious illness.” Twenty-five percent of all survey respondents believed that this was “definitely true” or “probably true,” as did 12 percent of our former Obama supporters.

The second is a statement that asked our respondents if they believed that “During her time as U.S. secretary of state, Hillary Clinton approved weapon sales to Islamic jihadists, including ISIS.” Thirty-five percent of our national sample believed that Clinton had sold weapons to the Islamic State, as did 20 percent of former Obama voters.

Finally, the third is a statement that “Pope Francis endorsed Donald Trump for president prior to the election.” About 10 percent of our national sample and 8 percent of Obama supporters thought this statement was true.

Belief in these fake news stories is very strongly linked to defection from the Democratic ticket by 2012 Obama voters. Among respondents who didn’t believe any of the fake news stories, 89 percent cast ballots for Hillary Clinton in 2016. Sixty-one percent of those who believed one fake news item voted for Clinton. But only 17 percent of those who believed two or all three of these false assertions voted for Clinton.

To be sure, data from a one-time survey cannot “prove” that these fake news items caused former Obama voters to defect. It is also possible that someone who chose not to vote for Clinton might endorse these false statements after the fact in order to rationalize their voting decision.

We also explored a number of other possible explanations for these voters’ defections.

What else could explain these defections?

The Clinton campaign heavily emphasized gender issues in an attempt to mobilize female voters. Could this have alienated men to the extent that they abandoned their prior support for the Democratic presidential candidate? Our data provide no support for such a claim. An identical 23 percent of both male and female respondents who had voted for Obama in 2012 defected from the Democratic ticket.

Did the lack of an African-American presidential candidate lead black voters to waiver in their commitment to the Democratic candidate? No. Indeed, fewer African-American voters (20 percent) defected from Clinton than did white voters (23 percent).

Age is weakly related to defection from Clinton. While 20 percent of voters over 35 abandoned the Democratic ticket in 2016, 30 percent of younger voters did so.

Education is also weakly associated with defection. Among college-educated former Obama voters, just 16 percent did not vote for Clinton, but the percentage almost doubled to 27 percent defecting for those with lower educational attainment.

More overtly political variables had a stronger impact. Half of those who placed themselves near the conservative end of the ideological scale defected from the Democratic candidate, while only 14 percent of those on the left did so.

Party identification exerted a stronger influence. Among the former Obama voters who identified themselves as Democrats, 7 percent did not vote for Clinton. This rose to 40 percent among independents and to 68 percent among those who identified with the Republican, Libertarian or Green parties.

So do all of these alternative factors mean it’s impossible to measure the unique impact of belief in fake news on the vote in 2016? Actually social science offers us a way. Multiple regression analysis is a tool that allows researchers to account for many different factors influencing behavior, in this case defecting from the Democratic ticket in 2016.

We used this tool to estimate the joint impact on the vote of all of these alternative explanatory factors. The first equation we ran included gender, race, age, education, ideological orientation, dissatisfaction with the condition of the economy and party identification. All together, these variables “explained” 38 percent of the likelihood of defection.

We then added the fake news items to the equation to measure their impact. The three fake news items explained an additional 14 percent of the likelihood of Obama voters defecting after the influence of all of the other variables had been taken into consideration.

We also added one more compelling element to our study. Using “feeling thermometers,” we measured how much each respondent liked or disliked Hillary Clinton and Donald Trump. If defection of Obama voters was only due to disliking Hillary Clinton or liking Donald Trump, then the introduction of this thermometer variable into the equation should make the link with fake news disappear.

Though how people felt about Clinton and Trump did somewhat reduce the strength of the relationship between fake news and defection, it did not eliminate it. Belief in fake news remained a significant predictor of defecting from Clinton. In sum, even after the impact of all of these other factors is taken into consideration, former Obama voters who believed one or more of these fake news stories were 3.3 times more likely to defect from the Democratic ticket in 2016 than those who did not believe any of these false claims.

That may not seem like much, but Clinton lost the presidency by about 78,000 votes (0.6 percent of nationwide vote) cast in the key battleground states of Pennsylvania, Michigan and Wisconsin. Though our evidence does not “prove” that belief in fake news “caused” these former Obama voters to defect from the Democratic candidate in 2016, our study results suggest that it is highly likely that the pernicious pollution of our political discourse by fake news was sufficient to influence the outcome of what was a very close election.