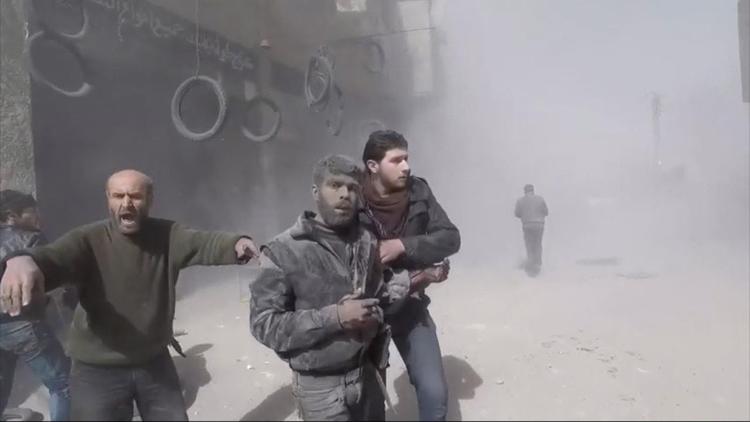 One of the most distressing take-aways of the Syria War since 2011 is that the United Nations does not work and all the hopes of the framers of its charter in 1945 have been dashed. World War II was a total war that polished off some 64 million people (nearly the entire population of today’s Britain or France), displaced hundreds of millions, and doomed more millions to live under brutal military occupation. Although the Axis powers were the worst offenders in targeting civilian, noncombatant populations (as with buzz-bombing London) as a tool of war, the Allies were not innocent, as with the firebombing of Dresden and the nuking of Hiroshima and Nagasaki.

The post-war settlement and the establishment of the UN was intended to strengthen international measures against war crimes (which also were more specifically defined over time). But the UN, notoriously, has no autonomy from the Great Powers and no teeth. That is why the International Criminal Court seems so preoccupied with deposed African dictators about whom the Powers do not care. It is impeded from moving against people like Israeli Prime Minister Binyamin Netanyahu, who is much more guilty of war crimes, including instituting Apartheid in the West Bank, than he is of petty corruption. It is impeded from moving against Muhammad Bin Salman of Saudi Arabia, whose air force has targeted civilian targets like schools and hospitals in Yemen some 33% of the time.

Among the biggest war criminals in the world is Syrian dictator Bashar al-Assad. His military has completely disregarded the welfare of civilian populations when trying to take back parts of the country that had fallen into rebel hands. It is legitimate in international law for his military to do so. It is not legitimate to just bomb civilian apartment buildings, schools and hospitals into smithereens. That was how his forces took East Aleppo.

It will be objected that Iraq and its American and other allies took Mosul in the same way. I’m not actually sure that the Aleppo and Mosul campaigns were identical, but two wrongs wouldn’t make a right.

ABC News: “More than 200 killed, including children, in Syria over last 2 days”

Now the Syrian Arab Army is preparing to launch a ground offensive in East Ghouta, a suburb of Damascus with some 300,000 residents. It is softening them up with a vicious bombing campaign that has killed hundreds in just a few days. East Ghouta is under the political control of hard line Salafi militias such as the Saudi-backed Army of Islam and the Syrian Conquest Front (formerly the Nusra Front), which dream of sweeping into Damascus and turning Syria into a Taliban utopia for fundamentalist Islam. Pro-regime newspapers maintain that East Ghouta militias in the past couple days have launched intensive mortar fire on the capital of Damascus, killing some 50 persons, mainly civilians. I cannot independently confirm this charge.

Now that it has recovered Homs, Hama, Aleppo and Palmyra and has the fundamentalists bottled up in Idlib in the north and Dera and Quneitra in the south, the al-Assad regime has apparently decided to crush East Ghouta, the only major rebel stronghold in striking distance of the capital.

At the same time, the regime is slowing invading Idlib in the north, creating some 150,000 new refugees as pro-rebel families, fearing retaliation, flee toward the border region with Turkey, living in tents during a deadly cold winter.

And Turkey itself seems set on ethnically cleansing the canton of Afrin, which has some 500,000 Kurds, sending in its own troops and armor but also fundamentalist Arab fighters in hopes of establishing a Salafi paradise in an area dominated by leftwing/ anarchist Kurds. The unstated goal here is almost certainly to chase the Kurds out of this region and establish a Salafi buffer zone for Turkey’s benefit on the Syrian side of the border.

The possibility now exists that the Turkish plan will be opposed by Syrian troops and by Lebanese and Iraqi Shiite militiamen who are going up to Afrin. But it is not clear that Iran and Russia want this rescue mission (Iran has 4 million restive Kurds and cooperates with Turkey against Kurdish nationalism), and Afrin Kurds have accused Russia of trying to block it. Al-Assad, however, does not always listen to his patrons, and he and his officials are eager to recover the Syrian Kurds as a constituency.

The dark moral universe in which al-Assad is the best hope for avoiding the ethnic cleansing of 500,000 Afrin Kurds by a NATO member state, while he and his bloodthirsty military kill large numbers of children and other civilians in East Ghouta, is emblematic of our post-post WW II era, in which international law and international governance seem irremediably broken.