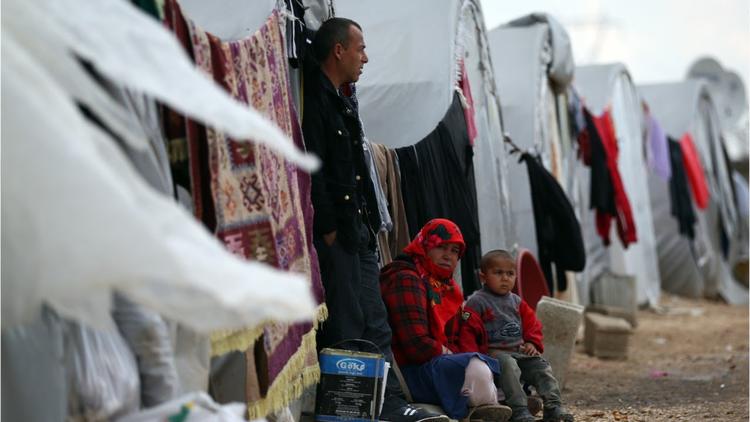 Syrians are fleeing heightened violence in Idlib to seek refuge near the Turkish border, which remains closed to all but critical medical cases. According to the UN, 247,000 Syrians were displaced to the border area between December 15, 2017 and January 15, 2018. Refugees who succeeded in crossing to Turkey, using smuggling routes, told Human Rights Watch that Turkish border guards shot at them and others while attempting to cross into Turkey. In some cases, Turkish border guards beat asylum seekers they detained and denied them medical assistance.

“Syrians fleeing to the Turkish border seeking safety and asylum are being forced back with bullets and abuse,” said Lama Fakih, deputy Middle East director at Human Rights Watch. “As fighting in Idlib and Afrin displaces thousands more, the number of Syrians trapped along the border willing to risk their lives to reach Turkey is only likely to increase.”

Human Rights Watch described its findings in a letter on January 30, 2018 to Turkey’s interior minister.

Human Rights Watch spoke to 16 Syrian refugees who entered Turkey with smugglers between May and December 2017, 15 in person in Urfa and Gaziantep, in southern Turkey, and the other remotely. Thirteen said Turkish border guards shot toward them or other fleeing asylum seekers as they tried to cross while still in Syria, killing 10 people, including one child, and injuring several more. At other border crossings, witnesses told Human Rights Watch that Turkish border guards fired warning shots into the air but did not target asylum seekers directly.

Twelve of the families Human Rights Watch spoke to who crossed near the Syrian internally displaced persons camp in al-Dureyya, near the city of Darkush said that upon capture, Turkish border guards placed them in a large square where they would remain until the guards had collected enough people to send back to Syria. Three families estimated that the square could fit up to a thousand people and usually had hundreds in it.

Those interviewed described their journeys across the border into Turkey as arduous and dangerous. Aside from the danger of being shot at by border guards, they described terrain littered with landmines, steep climbs, narrow paths along ravines, and valleys. They said they paid smugglers between US$300 and US$8,000 per person to reach Turkey, in many cases exhausting their resources.

Turkey has taken in about 3.5 million Syrians, hosting more refugees than any other country. Turkey has granted many of them temporary protection status, and sought to provide them with basic services, including medical care and education. However, Turkey’s generous hosting of large numbers of Syrians does not absolve it of its responsibility to help those seeking protection at its borders.

While Turkey is entitled to secure its border with Syria, it is required to respect the principle of nonrefoulement, which prohibits rejecting asylum seekers at borders when that would expose them to the threat of persecution, torture, and threats to life and freedom. Turkey must also respect the right to life and bodily integrity, including the absolute prohibition on subjecting anyone to inhuman and degrading treatment.

The Turkish government should issue standard instructions to the border guards at all crossing points that lethal force must not be used against asylum seekers and no asylum seeker is to be mistreated, but should be given access to medical aid when required. It should ensure that all crossing points comply with these core legal obligations, as well as the ban on refoulement.

The escalation of hostilities in the provinces of Idlib and Afrin inside Syria, and Turkey’s refusal to allow Syrian asylum seekers to cross the border, comes as some refugee host countries assert that Syria is safe for returns. Both Lebanon and Jordan have effectively closed their borders to Syrian asylum seekers as well.

In October 2017, the UN refugee agency stressed that “all parts of Syria are reported to have been affected, directly or indirectly, by one or multiple conflicts” and therefore maintained its long-standing call on all countries “not to forcibly return Syrians.”

Turkey’s international partners – including the European Union, which has a migration agreement with Ankara aimed at stemming onward migration to the EU – should press Turkey to keep its borders open to refugees, provide financial support to support Turkey’s refugee efforts, share responsibility by stepping up resettlement of refugees from Turkey, and refrain from returning people to Syria, Human Rights Watch said.

“Conditions in Syria are not safe for refugee returns,” Fakih said. “With hostilities in Afrin contributing to the growing displacement crisis in the country, Turkey should allow the thousands of desperate Syrians seeking refuge to cross the border.”

Since at least mid-August 2015, Turkish border guards have pushed back Syrians trying to reach Turkey. In April and May 2016, Human Rights Watch documented Turkish border guards shooting and beating Syrian asylum seekers trying to cross to Turkey, resulting in deaths and serious injuries, and sending those who managed to cross back to Syria. By November 2017, at least 330 people had died while trying to cross the border, according to the Syrian Observatory for Human Rights. Turkey has also erected a wall along most of its 911-kilometer borders with Syria.

Turkey’s land borders are legally protected by army border units of the Turkish Armed Forces. Gendarmerie also on duty at the borders operate under the authority of the land forces command. There are also gendarmerie stations near the borders charged with regular rural policing activities. In documenting the abuses, Human Rights Watch refers generically to border guards without specifying if they are soldiers or gendarmes since such specific information was not provided or known by many witnesses.

In December 2017, clashes between the Syrian government and non-state armed groups in Idlib escalated, with the Russian-Syrian military alliance conducting strikes to support the advancement of Syrian ground troops. According to the UN, heightened violence led 247,000 Syrians to seek refuge near the Turkish border between December 15th and January 15th. On January 20, 2018, Turkey launched an offensive in Kurdish-held Afrin in Syria.

Accounts of Shootings by Border Guards
The refugees said the shootings took place near al-Dureyya camp for internally displaced Syrians, at Turkey’s border wall near the Bab al-Hawa/Cilvegözü border crossing, and near the Orontes river smuggling point.

Witnesses told Human Rights Watch of new cases of Turkish border guards opening fire at civilians trying to enter Turkey through smuggling routes. Twelve witnesses said that the guards shot directly at the groups as well as firing indiscriminately. Three witnesses said that at least three people had died with them while attempting to cross, and one family spoke of six others that died with them in one crossing. In one of these cases, they shared the names of the dead with Human Rights Watch.

One woman that attempted the crossing with her family seven times at several crossing points between September and October said that the Turkish border guards shot at them during almost every attempt:

When they [Turkish border guards] open fire, we would be hiding in the valley. They would shoot randomly. I could see the bullets spark between my feet. In one incident, a woman was hit twice in her belly, and two men carried her back to Syria. We could see the trail of blood between the bushes.

She told Human Rights Watch that the shots came from “the front.” The family had three children with them, and the woman was pregnant at the time.

A second woman described the shooting of a 13-year-old child who was attempting to cross with his mother:

We had reached the wide street that divides Syria and Turkey, and the smuggler told the child and another man to cross it. They started to walk across, and then bang, bang. They were both shot. The kid, it went straight through his stomach, and he was bleeding heavily. We dragged him back with us all the way, and he died in Syria.”

Abuse of Detainees; Lack of Medical Care
At al-Dureyya crossing, border guards hit and otherwise mistreated captured asylum seekers, Syrians interviewed said. Five asylum seekers said that they saw the border guards hit men and women, including stepping on them with military-issued boots. One witness who was captured while attempting to cross, described the treatment:

When they [the Turkish border guards] captured us, we would stay out in the cold for hours [gathered in a square] until they had collected enough groups to return us to Syria. Even when it was cold and raining, they would force us to sit silently. One time a woman asked for a drink of water, and they hit her.

Three witnesses said that as many as 1,500 people were being held in the square when they were there.

Witnesses also described mistreatment at the crossing near Bab Al-Hawa/ Cilvegözü. A young man who was captured after attempting to cross with his family said that members of the Turkish border patrol hit him on the back and shoulder with a rifle and military-issue helmet, and subjected others in the group to similar treatment.

One witness said that a man had fallen into the valley while trying to cross, and had clearly broken his hands. When the group was captured, the man asked for help, but the Turkish border guard refused to take him to a hospital. They didn’t even give him painkillers, the witness said.

In a second case, a woman had given birth while attempting to cross the border. The Turkish border guards sent her and the child back to Syria without providing medical assistance.

In two cases described, it appeared that guards were trying to provide medical care, but that the efforts were too late and two refugees died. In one of the cases, a family told Human Rights Watch that a man had fallen ill at the border. The Turkish border guards had requested an ambulance, but the man died. His body was returned to Syria, with his family and the captured group.