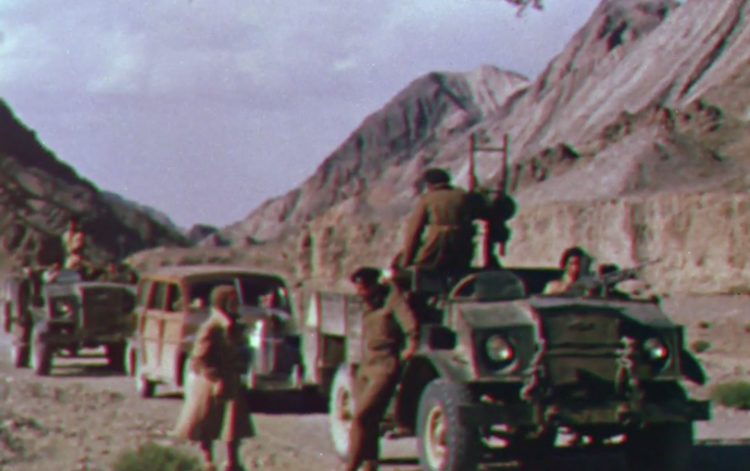 By Jonathan Westaway | The Conversation | – –

In a basement office at the Royal Geographical Society in London’s South Kensington, grainy 16mm film footage flickers silently across the screen, one of over a hundred expeditionary and travel films digitised recently by the society and the British Film Institute. They are now free to watch on the BFI website.

The collection ranges from professional expedition documentaries to home movies and amateur documentary footage. Some films, such as The Conquest of Everest (1953) are well known. Others are only now emerging from the obscurity of the archives, such as the recently restored colour footage filmed by Sir Charles Evans on the first ascent of the third-highest mountain in the world, Kangchenjunga 1955.

Beyond these professional documentaries intended for public release are a whole range of amateur films. And they are shedding new light on aspects of imperial science, administration and colonial travel, providing us with major new sources through which we can examine the hidden histories of exploration and empire.

The amateur films in particular force us to think in new ways about how we categorise film. Some of the film in the collection was shot by colonial officials and imperial administrators trained in intelligence gathering and surveillance techniques.

Never part of official government archives and never intended for public viewing, these films were not subject to the weeding of colonial archives instigated by Britain that occurred as its colonies won independence, part of the former colonial power’s attempt to manage access to the historical records of empire. Their reemergence into the public domain via retrospective digitisation projects enables us to see the inner workings of the British empire, inadvertently revealing some of its secrets.

Take the grainy film on screen in the basement of the Royal Geographical Society. It was shot in January, 1942 by an Indian Civil Servant, the diplomat Sir Clarmont Percival Skrine. Entitled Quetta-Damghan, the film shows a journey Skrine took with his wife from Quetta in modern-day Pakistan through the East Persian Corridor, one of the many Allied supply routes to the Soviet Union, to take up his post as British consul-general in Mashad, Iran.

At first, it is difficult to make out what is going on. A train crosses the deserts of Baluchistan. There are camels. A Buick station wagon rumbles across the mountains of the Iranian province of Sistan. It is World War II and Iran is under Allied-Soviet occupation; its eastern provinces bordering Afghanistan are remote and dangerous.

In his book World War in Iran (1962), Skrine left us with a published account of this journey, enabling us to piece together events depicted in the film. But the film also reveals events that were never disclosed in his written work.

For example, there is footage of Skrine’s Buick being escorted by two vehicles from the Indian Long Rage Squadron (ILRS) in cut down Chevrolet trucks mounted with double-mounted Vickers K machine guns, almost certainly the only colour footage that exists of this auxiliary unit in action.

The ILRS had only just been formed, on December 25, 1941, specifically to patrol the Persian border between the Soviet Union and Baluchistan, and was modelled on the 8th Army Long Range Desert Group, the precursor to the SAS. Just how dangerous the road was is made abundantly clear by Skrine in his published account. Unavoidably delayed for two days, Skrine arrived at Qaimabad to discover that his host, a Sikh trader and British subject, had been murdered along with his family by Afghan raiders two nights before.

Entering the Soviet occupied zone in northern Iran, the Skrines also ran into a tribal insurrection in southern Khorosan province. All the passes south of Mashad were closed, necessitating an escort from the occupying Soviet forces.

The film shows the moment on January 28, 1942 when they rendezvoused with the Red Army. They were met, Skrine recalled, by “half a dozen open Ford-style trucks loaded with soldiers. They sat motionless with their tommy-guns, gazing at us with an expressionless stare which we found at first rather sinister.”

There is then some extraordinary footage of his wife, Doris Skrine, and her Indian orderly walking the family cat (as you do) on a windswept mountain road as Red Army officers and consular staff mill around and share cigarettes, their collars turned up against the winter cold. Skrine points the camera at a truck load of Red Army troops, who stare back impassively. It is just a moment in a little-known theatre of World War Two, but it tells us so much about the uneasy truce that existed between the Allied and Soviet occupying forces and the importance of the Persian Corridor in this global conflict.

Skrine’s films provide us with unprecedented footage of Iran under the Allied-Soviet occupation, and demonstrate a strong surveillance sensibility.

Increasingly after 1942, the Soviets confiscated and destroyed Skrine’s ciné-camera footage if they felt it strayed too long on military subjects. So it is all the more remarkable that, later in 1942, Skrine managed to avoid detection and travelled north to the border of Soviet Turkmenistan and covertly filmed the oil trains trundling from Tashkent to Krasnovodsk along the Trans-Caspian railway, footage that also appears in his Quetta-Damghan film.

He also made a brief, unauthorised crossing of the unguarded border into the Soviet Union. Covert surveillance, deliberate infringement; to the Soviet occupying forces this would have constituted espionage. Old home movies, it seems, are not always innocent. In some cases, they enable us to see with the eyes of Britain’s imperial security state.