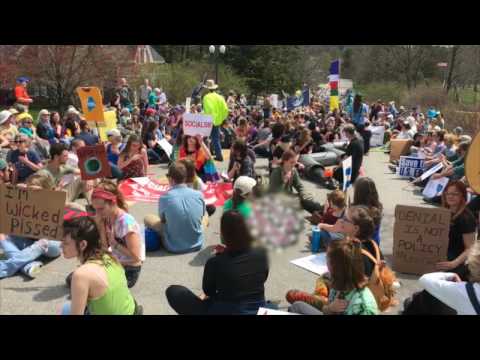 Rob Levin, a Quaker attorney in Portland, Maine, has been concerned about the growing climate crisis for years. Recently, he came to see that using nonviolent direct action could increase his effectiveness on the issue.

When President Trump withdrew the United States from the Paris climate agreement, an idea emerged among Levin and his fellow Portland Quakers: dramatize how the decision makes the United States a rogue nation. So, in December, they went to the courthouse and walked around it 195 times — once for each nation that agreed to reduce its carbon emissions. They then turned around, held up an American flag, and circled it in the opposite direction.

Levin then put the flag at half-mast and carried it onto the courthouse grounds, expressing his mourning for the U.S. decision. He knew this was breaking the law. He was briefly detained by police, then let go without arrest.

On reflection, Levin and the others realized that — even though the day’s action was highly meaningful to them personally, and the mass media coverage was good — its one-off nature would, in reality, not make a difference to policy.

Levin searched for something more likely to mobilize pressure on a perpetrator of the climate crisis. He discovered that Central Maine Power, or CMP, the largest electrical utility in the state, had for two years in a row lobbied against solar power — despite its public stand for renewables.

Maine Quakers formed a group to, as they put it, “shine the light” on the utility’s hypocritical practice. Thirty went to the Augusta, Maine, headquarters on January 27, despite the likelihood that they would be locked out of the building on a frigid day. In a parking lot just a hundred yards from the building, they met, shared signs and began to sing.

As they walked toward headquarters, they saw that security had set up a barrier in front of the entrance. They asked to speak with a CMP representative. Police issued the order to disperse. Instead, Levin and three others tried to enter and were arrested. The magistrate gave them unusually high bail ($200), set a March 19 court date and barred them from returning to the site. News reports were sympathetic, highlighting the alleged duplicity of Central Maine Power.

Meanwhile, the Maine legislature is considering a bill that would require Maine homeowners with solar panels to install a new meter forcing them to pay a fee for their own solar generation. Michael White, one of those arrested, said, “CMP comes up with these phony arguments saying that poor people are going to be hurt by rich people putting solar on their roof, which is a bunch of nonsense. Solar benefits everybody, and it lowers the rates for everybody.”

CMP has been lobbying for the bill, and a vote is expected within the next two weeks. The Quaker group is considering returning to the CMP headquarters and holding a prayer meeting inside the lobby — a tactic that several other Quaker groups have employed recently. Last March, Seattle Quakers and allied clergy held a prayer meeting inside a Chase Bank to expose its over $300 million in funds to the Bakken pipeline, which is strenuously opposed by the Sioux. Then, on January 30, the Philadelphia utility PECO called the police in response to a prayer circle of Quakers and allies in the Power Local Green Jobs Campaign. The campaign is demanding a massive increase in solar, generated by rooftop solar in high unemployment neighborhoods with a history of racist neglect.

Utilities and banks have been forced to make pro-climate changes by sustained grassroots campaigns. The first step, in each case, has been to do what the wily old strategist Mohandas Gandhi called “experiments with truth.”

Even getting the first step of truth-telling done, however, requires some time. Many institutions doing harm have built up a lot of legitimacy. Utilities are usually there for us when the ice and weather bring down the power lines or when extreme heat brings us close to brown-out, and it’s the larger grid that saves us. Our personal contacts can be with a utility’s helpful service workers.

In Philadelphia, I find that a favorite theater gets grants from a utility and a special ride in the children’s park is kept in shape with the help of grants from another. By associating their name with good causes, the utilities build goodwill; they appear to be good citizens. Like Dorothy in “The Wizard of Oz,” we need to pull the curtain back, revealing the part of the show that’s not warm and fuzzy.

The good news is that it’s getting easier. Polls consistently show a large majority of Americans think that the United States is going in the wrong direction, and politicians’ ratings are in the toilet. When Maine activists reveal that Central Maine Power is in bed with the politicians, it does not reflect well on CMP.

Extreme weather is not only reported more frequently — people have their personal stories. The federal government spent $306 billion in responding to the aftermath of natural disasters in 2017. Who will pay for this?

These realities erode the credibility of a utility that is making money, ignoring scientists and acting like there’s no tomorrow. In Philly, we meet people newly learning that a utility gets its monopoly status, and guaranteed profitability, from the public that grants it a license — and the public can take it away!

The news only spreads, however, through repeated sharing: conversations, social media and, yes, a series of dramatic actions from prayer to civil disobedience. As Rob Levin discovered when he reflected on his Paris agreement action at the courthouse, what’s personally gratifying isn’t necessarily effective. What we found at Earth Quaker Action Team was that a campaign — a series of actions, escalated over time — combines both personal expression and the satisfaction of making an impact.

George Lakey co-founded Earth Quaker Action Group which just won its five-year campaign to force a major U.S. bank to give up financing mountaintop removal coal mining. Along with college teaching he has led 1,500 workshops on five continents and led activist projects on local, national, and international levels. Among many other books and articles, he is author of “Strategizing for a Living Revolution” in David Solnit’s book Globalize Liberation (City Lights, 2004). His first arrest was for a civil rights sit-in and most recent was with Earth Quaker Action Team while protesting mountain top removal coal min