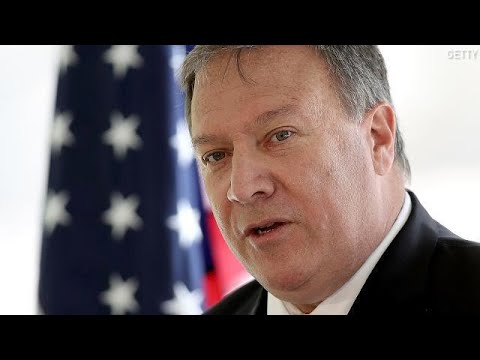 Trump is no churchgoer. But for evangelicals, his hard right line on Israel and machinations against Iran make him an instrument of the endtimes.

Welcome back, Gog and Magog. I can’t say that I’ve missed you.

You might remember the Gog and Magog story from 2003, when George W. Bush was making plans to invade Iraq and assembling a “coalition of the willing.” French President Jacques Chirac was quite unwilling, so Bush went to great lengths to break down his resistance.

As part of this wooing of Chirac, Bush referred to the Biblical prophecies regarding Gog and Magog that suggested to some evangelicals that the end times were approaching in the Middle East.

Chirac had to consult a theologian to find out what Bush was going on about. Gog, Chirac was told, is the leader of Magog, and Magog is the enemy. A war involving Gog and Magog would basically trigger the apocalypse. Because the Bible was not precise in its predictions, Magog could be anyone or anything: Satan, Muslims, even (for Chirac) a poorly executed soufflé.

Bush, however, had a much more precise interpretation in mind: Saddam Hussein was Gog, and the call had gone out to rally the forces of good for a grand showdown. Chirac, who confirmed the story in 2009, was taken aback at Bush’s religious fanaticism.

A number of U.S. officials around Bush, including diplomat Kurt Volker, have strenuously denied the story. But even if Bush himself didn’t indulge in such millenarian fantasies, there were plenty of evangelicals in his circles who did have an impact on U.S. foreign policy. Over the years, Washington has identified plenty of Magogs and set out to topple nearly as many Gogs, always with the certainty of having “God on our side.”

Indeed, the U.S. role in the realization of God’s plans on Earth has been a leitmotif of American foreign policy since the days of John Winthrop and his assertion of the new colony in the Massachusetts Bay as the future “city on the hill.” It is a foundation stone of American exceptionalism. It is a contributing factor to this country’s recurrent xenophobia.

But the application of Biblical prophecy to the geopolitics of the Middle East is something more recent.

Late, Not So Great

The publication of Hal Lindsey’s The Late Great Planet Earth in 1970 brought the wild predictions of end-times fundamentalists to the mass market. Issued by Bantam Books, Lindsey’s book started a cottage industry of pseudo-scholars combing through the Bible for clues to deciphering the puzzle of Middle Eastern politics.

Lindsey predicted that the war of Gog and Magog would begin with a Soviet invasion of Israel. The Anti-Christ would appear in the form of a United Europe, and the rapture would usher all the chosen up to heaven some time in the 1980s. In a sign of the mainstream appeal of this nonsense — and I confess that I devoured the book as a pre-teen under the impression that it was science fiction, which it was — Orson Welles provided the voice-over for the film version. (And you thought that Orson shilling on TV for Paul Masson wine was the lowest he went!)

The 1980s came and went. The world didn’t end. And neither has Hal Lindsey, who at the age of 88 still produces a half hour of fabulous folderol every week.

After all, the failure of predictions to come true has never stopped peddlers from making new forecasts or the gullible from listening to them (just ask the Seventh Day Adventists). Some years after Lindsey’s success, the Left Behind books brought the end-times narrative to a whole new generation. This version of Gog and Magog also centered on Israel, but identified the United Nations as the villain. And this time it was Nicholas Cage who embarrassed himself by appearing in the film version.

Today, some millenarians continue to identify the United Nations as Magog. Others happily enlist

But generally, the focus remains on Israel — and Jerusalem more specifically.

And that’s where Donald Trump comes in.

The current U.S. president would seem an even less likely crusader against Gog than was the eternal fratboy, George W. Bush. Yet the evangelical community rallied around Trump in force in the 2016 election and has largely stayed by his side despite the nonstop revelations of his myriad sins (Summer Zervos, Stormy Daniels, and so on).

Much of the support derives from Trump’s domestic promises (abortion, Supreme Court nominees). But there’s also a foreign policy component.

For example, despite some early nods in the direction of the Palestinians, Trump has become a major champion of Israel. He has even announced that the United States recognizes Jerusalem as the capital of the country. For run-of-the-mill, right-wing evangelicals, Trump’s decision is just plain good geopolitics: They believe that Israel is a force for good in the world, and anything that Washington does on its behalf helps both the United States and Christianity in general.

For the dispensationalists who are obsessed with the Rapture and the coming of end times, the Jerusalem decision is a sign and portent that Trump is willing to stand against the entire world, if necessary, to stand up for Israel. Mainline evangelicals often pretend that dispensationalists attract only a small number of folks. According to one poll, however, 65 percent of evangelical leaders identify with premillennialism — that’s the strand of Christian doctrine that involves the second coming of Jesus, a period of tribulation, and a 1,000 year reign of Christ on earth (with the Rapture happening at some point during that period).

“What kick-starts the end times into motion is Israel’s political boundaries being reestablished to what God promised the Israelites according to the Bible,” Nate Pyle, a pastor and author of a book about Jesus, informed Newsweek. Israeli Prime Minister Benjamin Netanyahu, in other words, is the instrument of God when he blockades Gazans, encourages illegal settlements on Palestinian land, and otherwise defeats any two-state solution to the Israeli-Palestinian conflict.

Trump is Netanyahu’s fanboy, so Trump too is God’s instrument. As I wrote back in October 216, “Much millenarian support comes from a belief that God has anointed Trump the ultimate disrupter of the status quo, the human wrecking ball that will smite all the structures standing in the way of Christ’s Second Coming. No one (other than the Donald himself) would confuse the candidate with the Messiah, but some evangelicals imagine him in the role of a John the Baptist gone slightly berserk.”

In the secular world, the Doomsday Clock has moved to within 150 seconds of midnight. Likewise, the clock of the end times has been ticking along, and many of the faithful are preparing for the Rapture.

The Trump era has kicked off a boom time for apocalyptics.

The Signs and the Portents

Don’t let the defeat of the Islamic State fool you. The Middle East remains a cauldron of conflict, and there are still plenty of Gogs to go around.

One of the best candidates for a Hal Lindsey-like showdown in the Middle East is Syria. Bashar al-Assad, the leader of Syria, has all the hallmarks of a good Gog.

Like Saddam Hussein, he’s a Baathist who represents a ruling minority (in Assad’s case it’s the Alawites in a majority Sunni country, while Saddam presided over a minority Sunni government in a majority Shia country). Also like Saddam, Assad has been ruthless in eradicating his own population, though he was considerably more selective in his killing before the Arab Spring protests broke out. The most recent attacks by Russian and Syrian planes in Eastern Ghouta, a suburb of Damascus held by opposition forces, have resulted in more than 500 dead and more than 1,500 injured (in a conflict that has already claimed hundreds of thousands of lives).

Syria is now the focal point of numerous contesting powers. Russia and Iran are backing Assad. Turkey has invaded to suppress the Syrian Kurds, which has caused the latter to team up with Damascus (on the principle that the distant enemy is better than the enemy nearby). Despite Trump’s pledge to Turkey to stop backing the Syrian Kurds now that the Islamic State is no more, this military support is still a hefty line item in Trump budget.

Meanwhile, the United States is maintaining an unknown number of U.S. troops in Syria…for what? Answering that questions leads to Trump’s true Magog.

Trump doesn’t care about Assad. Sure, he’s called him a “butcher,” and lobbed 59 Tomahawk cruise missiles at Syrian forces last April in response to the Syrian use of chemical weapons. But Trump has something of a fondness for embattled autocrats and has acceded to Russian wishes to keep Assad in place, at least until 2021.

What Trump does care about, however, is Iran. The administration wants to keep U.S. troops in Syria to block Iran from expanding its influence in the country. Add to that the various indications that the Trump administration is gearing up for a direct confrontation with Iran, and you’ve got a perfect recipe for Gog and Magog.

Of course, there are other apocalyptic scenarios in the Middle East. Saudi Arabia and Iran might go to war, directly or through their proxies. If the Iran nuclear deal falls through, Israel might decide to bomb Iran’s nuclear complex. A new version of Sunni radicalism — a la al-Qaeda or the Islamic State — might mutate out of the primordial stew of resentments in the region.

But all of these scenarios converge if Trump decides to create an explicit coalition of the willing against Iran, with Israel and Saudi Arabia as founding members, and some secret side agreements with Sunni terrorist organizations to carry the fight to the Iranian Shia.

For Trump’s purposes, which would be to rally his base and distract attention from his various policy failures, the confrontation with Iran would really be of biblical proportions. The mullahs of Iran are much better candidates, in the long run, for Gog than a secular nationalist like Assad.

Trump is not a religious man. He can’t quote the Bible properly, and he has the most tenuous connection to the Church of any modern president. Don’t expect him to quote Gog and Magog in his conversations with Israeli Prime Minister Benjamin Netanyahu or Saudi Crown Prince Mohammed bin Salman.

But Trump is itching for a fight. He wants to shake things up. With evangelicals and right-wing Likudniks forming a significant core of support, he is already fulfilling the Middle East agenda of the apocalyptics. And, unfortunately, there’s more to come.

USA Today: “Who is Mike Pompeo?”