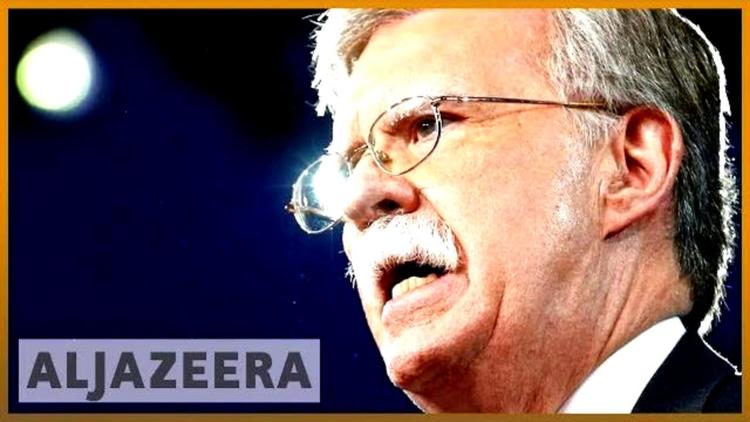 While U.S. President Donald Trump has previously denounced “regime change” and “nation-building,” John Bolton, his choice for national-security adviser, has been a vocal proponent of American intervention abroad.

In selecting former U.S. Ambassador to the United Nations John Bolton as his new national-security adviser, U.S. President Donald Trump has tapped a man whose foreign policy record stands at odds with central elements of Trump’s stated vision of America’s role in the world.

While Trump has previously denounced “regime change” and “nation-building,” the 69-year-old Bolton is a vocal proponent of U.S. intervention abroad and has advocated overthrowing governments hostile to the United States. Bolton is also a fierce critic of Russian President Vladimir Putin and his government, with whom Trump has voiced a desire to mend bilateral ties that have been battered over the conflicts in Ukraine and Syria, as well as alleged Russian meddling in U.S. elections.

Bolton’s hard-line views on Iran and North Korea align more closely with Trump’s. But shortly after Bolton argued in February that it would be “perfectly legitimate” for Washington to carry out a preemptive strike against Pyongyang, the White House said Trump had accepted an invitation to meet with North Korea’s leader to discuss its nuclear program.

Bolton said in an interview with Fox News following Trump’s March 22 announcement of his appointment that his earlier statements on a range of issues are now “behind me.”

“The important thing is what the president says and the advice I give him,” he said.

Here’s a look at what Bolton has said on these and other major foreign policy issues.

Bolton is a hawk when it comes to Russia and its president, citing the need for strong “deterrence” to counter what he calls Putin’s aggressive projection of power abroad reminiscent of the Soviet Union’s.

“Vladimir Putin’s Russia is on the prowl in Eastern Europe and the Middle East in ways unprecedented since the Cold War,” Bolton told The Washington Post shortly after Trump’s November 2016 election. “Unchecked by [outgoing U.S. President Barack] Obama’s weak and feckless policies, Putin has had every reason to believe that persistence will achieve any objective Russia has the capacity to seek.”

Bolton has also advocated strong-arming Putin in bilateral and national-security matters. Discussing fugitive National Security Agency (NSA) leaker Edward Snowden, whom Moscow has granted asylum, he said in a 2013 interview with Fox News that “in order to focus Putin’s thinking, we need to do things that cause him pain as well.”

It’s unclear whether Bolton will temper his positions or rhetoric about Russia as Trump’s new national-security adviser. Public tensions between Trump and the man Bolton is replacing — H.R. McMaster — emerged in February after McMaster said evidence of Russian meddling in U.S. was “really incontrovertible.”

“General McMaster forgot to say that the results of the 2016 election were not impacted or changed by the Russians,” Trump tweeted.

In July 2017, Bolton called Putin’s denial of Russian interference in U.S. elections during a meeting with Trump “insulting” and said that “attempting to undermine America’s constitution is far more than just a quotidian covert operation.”

“It is in fact a casus belli, a true act of war, and one Washington will never tolerate,” Bolton wrote.

During his presidential campaign, Trump triggered concerns among alliance members by suggesting he might jettison a protection guarantee for other NATO members if they did not boost their defense spending. That suggestion particularly alarmed Eastern European members that were under Moscow’s domain during the Soviet era.

Bolton sharply criticized Trump’s comments, telling the conservative news site Breitbart News in July that the remarks were “encouraging Russian aggression” and calling them “a dagger at the heart of the most successful political/military alliance in human history. He needs to retract it, and change his position.”

Bolton views NATO as a bulwark against what he calls a “belligerent Russia,” and he said in an interview in October 2016 that “protecting Europe — Eastern and Central Europe, the former states of the Soviet Union — is extremely significant for the United States.”

He added that he fears a potential “provocation” by Moscow against the three NATO members in the Baltics — Latvia, Lithuania, and Estonia — that would possibly involve Russian-speaking populations there.

If such a Russian effort were successful, Bolton added, it would be a “shattering blow” to NATO.

Trump pledged during his campaign that if he were elected, “the era of nation-building will be brought to a very swift and decisive end.”

Bolton, however, has been a prominent advocate of U.S. intervention abroad to oust hostile governments, including the 2003 invasion of Iraq that Trump has called a “disaster.” And he told Breitbart News in November 2016 that the only long-term solution to dealing with Iran is “regime change.”

Bolton is an outspoken opponent of the deal between world powers and Iran to curb the latter’s nuclear capabilities in exchange for lifting some sanctions. In the run-up to the signing of the 2015 deal, he advocated a bombing campaign targeting some of Tehran’s nuclear facilities, saying that “only military action…can accomplish what is required” to prevent Iran from developing atomic weapons.

Trump made his opposition to the deal a central part of his presidential campaign and pledged to end it, though McMaster had advocated for delaying such a move. Trump has since threatened to withdraw from the accord unless European allies and the U.S. Congress agree by May 12 to fix what he called its “disastrous flaws” and impose tough new restrictions aimed at curbing Iran’s ballistic-missile development and its involvement in regional conflicts.

Bolton has said that since the deal was signed in Vienna between the so-called P5+1 (China, France, Russia, the United States, and the United Kingdom, plus Germany) and Tehran, “Iran’s belligerent behavior worldwide has only increased.”

“Tehran clearly saw the Vienna accords as a mere rest stop on the way to extracting more concessions from the United States,” he wrote in August.

Bolton has blamed the ongoing war in Syria in part on the U.S. commitment to the Iran deal under Trump’s predecessor, Barack Obama. He has said that Obama did not want to anger Tehran with a strong intervention against Syrian President Bashar al-Assad, whom Iran and Russia back in the conflict.

Early on in the Syria war, Bolton wrote that Washington should approach the conflict “on the basis of strategy, not emotion” and avoid “knee-jerk reactions instead of careful analysis.” In a 2012 essay, he said that “regime change in Syria is prima facie in America’s interest,” but warned of the dangers of not knowing what a successor government might look like. He recommended backing “Syrian rebel leaders who are truly secular and who oppose radical Islam” and who would “reject Russian and Iranian hegemony over their country.”

Bolton wrote in December 2015 that “Syria and Assad are a strategic sideshow” and that the “real issue is the regime in Tehran.” Assad, he wrote, is a secondary issue compared to scrapping the Iran nuclear deal and destroying Islamic State (IS) group militants.

“Assad simply is secondary to these larger objectives. A realistic 2017 American foreign policy should focus more on eliminating the actual threats we face, not merely on their symptoms,” Bolton wrote.

Bolton accused Obama of employing a “whac-a-mole strategy” to defeat IS militants and incorrectly viewing the effort against that extremist group as a “law enforcement matter” rather than a “war” on terrorists.

In order to combat IS extremists, he advocates “a robust policy based on U.S. leadership and full participation, including ground forces, to destroy ISIS” — another acronym for IS.

Bolton has also called for carving territory out of Syria and Iraq to create “a new Sunni state.”

“The government of this state could either be democratic or led, to paraphrase Franklin Roosevelt, by one of our SOBs,” he wrote, borrowing a comment on working with “sons of bitches” that is often attributed to the late U.S. president.

Expanding on this proposal in November 2015, Bolton laid out an anti-IS vision that diverged from Trump’s call for joining forces with the Kremlin in this effort. The Russian and Iranian goal of “restoring Iraqi and Syrian governments to their former borders is a goal fundamentally contrary to American, Israeli, and friendly Arab state interests,” he wrote.

“Notions, therefore, of an American-Russian coalition against the Islamic State are as undesirable as they are glib,” he wrote in The New York Times.

In a June 2017 op-ed for The Wall Street Journal, Bolton wrote that the United States “ought to abandon or substantially reduce its military support for Iraq’s current government.”

“Despite retaining a tripartite veneer of Kurds, Sunni Arabs, and Shiite Arabs, the capital is dominated by Shi’ites loyal to Iran,” he wrote.

Carl Schreck is a senior correspondent for RFE/RL.
SchreckC@rferl.org