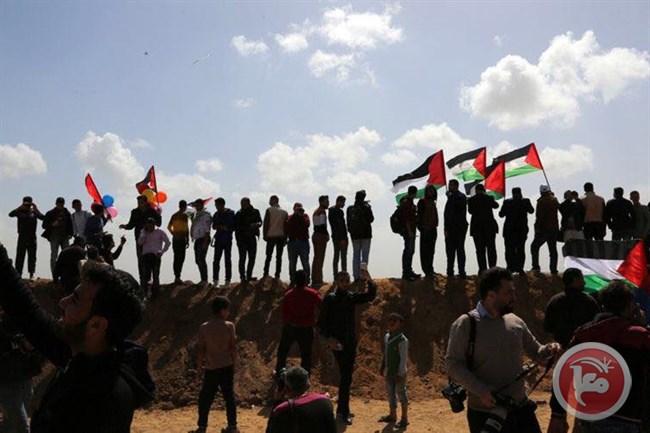 GAZA CITY (Ma’an) — Thousands of Palestinians from across the besieged Gaza Strip took to the border with Israel on Friday for the first day of protests in the weeks-long protest being called by Palestinians as “The Great March of Return.”

The march began on Friday, March 30, the 42nd anniversary of what Palestinians know as Land Day, during which they commemorate the 1976 Israeli killing of six Palestinians who were protesting the Israeli government’s expropriation of thousands of dunums of Palestinian land.

The Great March of Return will continue for six weeks until May 15, which marks the 70th anniversary of the Nakba, or catastrophe, when more than 700,000 Palestinians were expelled from their lands to make way for the creation of the state of Israel.

Palestinian in Gaza, which has a majority refugee population, have set up tents near the border and plan to and move gradually closer to the border fence.

Dozens of signs have been set up across the border in Arabic, Hebrew, and English, saying “We are not here to fight; we are here to return to our lands.”

Despite march organizers and Palestinian politicians maintaining that the march be a non-violent one, Israeli officials have called the protests “violent riots,” and as of Friday afternoon, Israeli forces had killed 6 Palestinians and injured dozens more.