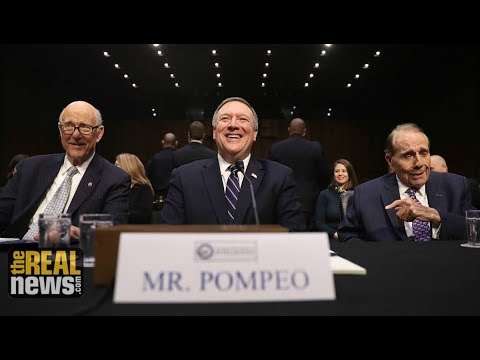 All you need to know about Mike Pompeo, the four-term congressman from Kansas who is actually from California, is that most of his life he has been in business with the Koch brothers. His appointment as Secretary of State puts a seal on Trump’s withdrawal from the Paris climate accords.

More dangerously, Trump was straightforward that he put Pompeo in to replace Rex Tillerson in order to destroy the 2015 Joint Comprehensive Plan of Action treaty between the United Nations Security Council and Iran.

Pompeo, despite his obvious brilliance, appears to be driven by profound currents of anger, resentment and vindictiveness, and to be unable to feel remorse for purveying falsehoods. His shameful performance at the circus he ran attempting to blame Secretary of State Hillary Clinton for the 2011 Benghazi attack and its aftermath demonstrated a willingness to play fast and loose with the facts and an inquisitorial, McCarthyite mindset.

His lack of a moral compass makes his connection to the Kochs especially dangerous.

Charles and David Koch, the notorious billionaires gnawing like termites at the foundations of American democracy, are all about petroleum. They fund phony climate denialism with a Potemkin village of foundations and expert frauds, to make sure oil keeps its value for as long as possible (even at the cost of visiting catastrophes on our children and grandchildren, since burning oil is causing catastrophic global heating).

The Koch brothers have worked by exploiting the shameful corruption of US campaign finance, where candidates are forced to raise large sums of money to pay for radio and television ads over the public airwaves. It turns out that even small campaign donations can have a huge effect on public policy. Hence, their use of the American Legislative Exchange Council, where the “exchange” refers to state and national lawmakers’ exchange of their conscience for corporate campaign funds. The Koch-backed ALEC has singlehandedly worsened environmental protections and harmed workers in most states in the nation.

The mystery here is the difference between Koch-backed politicians and Exxon-Mobil-linked ones on the Iran deal.

Rex Tillerson was also from the world of Big Oil, but was, as Trump said with annoyance, all right with the JCPOA.

Pompeo is a huge Iranophobe (and also a fierce bigot against Muslim Americans).

The Kochs fund Libertarian groups (who fondly imagine that the rule of unelected giant corporations would be kinder than that of elected governments), which in turn have tended to be anti-war. The Trumps and their interest groups opposed the Iraq War of 2003-2011.

So if Pompeo is tight with the Kochs, why is he so truculent with regard to Iran?

Let me just speculate here. One aim of the Iraq War, revealed by Rupert Murdoch, was to reduce vastly the cost of petroleum. For small oil services companies like Dick Cheney’s Halliburton, the advantages of gaining access to Iraqi bids (which would become possible once regime change had caused Congressional sanctions on Saddam Hussein to lapse) outweighed the likelihood of lower prices.

But for Big Oil, with many long-term bids and perhaps ownership of fields, having Iraqi oil come online would be undesirable, since their assets would be worth less if Iraq flooded the market. Hence the Kochs had an economic reason to oppose that war, and the consequent lifting of sanctions on Iraqi petroleum.

The Iran Deal of 2015 also has the effect of reducing oil prices, since it allows Iran to export more oil and increases supply at a time of stagnant growth in demand. Moreover, there is no prospect of American companies getting any of the Iranian profits.

Finding a way to put Iran back under sanctions would firm up oil prices and make billions of dollars for the Kochs. Hence the desire to roll back the Iran deal.

Even if this explanation is incorrect or insufficient, what seems clear is that Pompeo is very bad news for stability in the Middle East, because of his obsession with finding a way to hurt Iran.