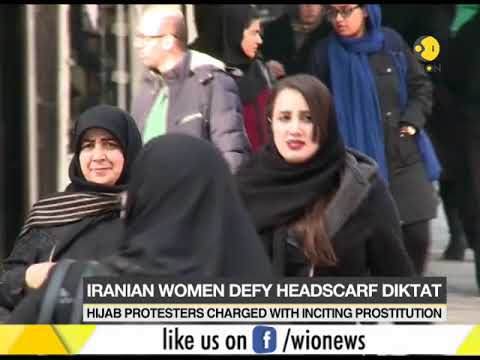 The hijab became compulsory in Iran after the 1979 revolution.

The Islamic scarf, or hijab, is one of the pillars of the Islamic republic and among its most visible symbols. It became compulsory after the 1979 revolution, after which Iranian women were required to cover their hair and body in public.

Those who violate the rule face police harassment, fines, and even jail terms, and a number of the recent hijab protesters have already been taken into custody.

Now, Iran’s vice president for women’s and family issues, Massoumeh Ebtekar, has emphasized the need for a national dialogue with young Iranians about the hijab.

“We should make it possible to hear different views and we should use methods that are lawful and with the fewest police encounters,” Ebtekar said at a February 28 press conference marking Women’s Week in Iran.

Her comments echoed an op-ed piece that appeared days earlier on the popular news site Asr-e Iran calling on authorities to talk to the women protesting the hijab.

“Apart from the crime that they may or may not have committed, wouldn’t it be better to talk to these girls?” Asr-e Iran asked.

Beginning in late December, more than a dozen women and at least one man publicly challenged the hijab rule by climbing onto utility boxes in Tehran and other cities and waving head scarves on sticks. The women were dubbed the “Girls From Revolution Street” after the street (Enghelab) in downtown Tehran where the first of the recent wave of protesters — 31-year-old mother Vida Movahed — made her silent plea on December 27 for greater freedom for women.

Their acts of civil disobedience, admired by many, have resulted in calls ranging from demands for a referendum and a dialogue on the hijab to tougher measures against those flouting the restrictions.

The head of Tehran’s City Council, Mohammad Hashemi, warned on February 27 against turning the hijab into “a security issue” while suggesting that authorities are to blame for the opposition to the hijab rule.

“The question is over our education of the new generation. The young generation in the first decade of the revolution were passionate supporters of the hijab,” Hashemi claimed, adding that “currently a segment of [the younger population] has doubts, while others oppose it.”

Reformist lawmaker Parvaneh Salahshour on February 26 criticized the use of force against the women protesting the hijab, saying their demands should be looked into.

“This is a demand that our women have. The legal ways of resolving this issue should be studied,” she was quoted as saying.

Reform-minded analyst Abbas Abdi, among the hostage-takers of U.S. nationals during the 1979-80 upheaval that ushered in Iran’s religious leadership, went as far as calling for a referendum on the hijab.

In an op-ed piece published in the daily Etemad last month, Abdi said the protests have made a debate about the hijab, which had become a taboo subject in past years, “necessary.”

“We’re currently in a situation where the young and even the middle-age generation don’t see the need for a political understanding of the hijab. The majority don’t oppose the establishment, they just don’t understand why they are forced to [respect] it,” Abdi wrote.

In another piece published two weeks later, he cited “the legal limits of the hijab” among issues that can be put to public voting.

The head of the headquarters of Iran’s Vice and Virtue Department in Khorasan Razavi Province, Seyed Abdollah Erjayi, said those who call for a referendum on the hijab hope to divert attention from the country’s key issues, including the economy.

“Fortunately, about 90 percent of people respect the hijab rule, and the few who are against this issue should adapt themselves,” he said on February 8. “The different parts of an establishment that is based on Islam cannot be put to vote.”

Senior Ayatollah Makarem Shirazi said on February 27 that disrespecting the hijab is akin to bribery and should be countered.

He warned against those who are “knowingly or unknowingly” calling to weaken the Islamic establishment.

Others have highlighted the mark the women protesting the compulsory hijab have left on Iranian society.

“Last night, I took a cab around the intersection of Valiasr Street. A girl got in, too. The cab driver asked the girl where she was going. She said, ‘To the intersection of #Girls_of_revolution_street!’ The driver took her to her destination without asking any question,” Tehran-based journalist Amir Ebtehaj wrote on Twitter on February 28. “It’s interesting for me that the protest movement of a few has had such an impact on the daily lives of the people.”

Speaking on February 28, Rahimi said the police will abandon politeness in dealing with antihijab protesters.

“These people will be confronted decisively by the police,” Rahimi was quoted as saying.

Golnaz Esfandiari is a senior correspondent with RFE/RL.
EsfandiariG@rferl.org