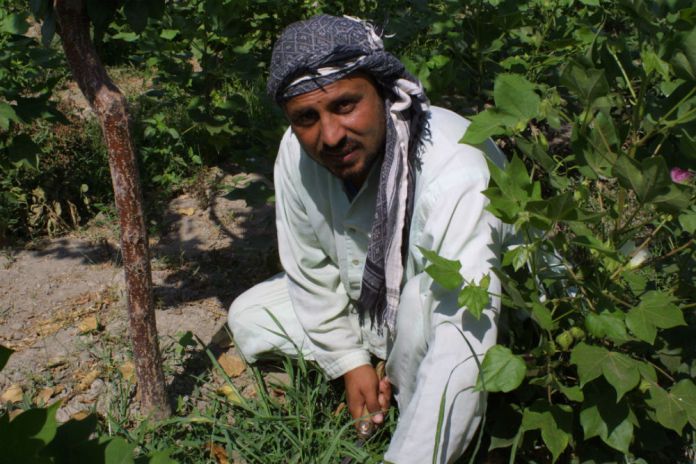 Welcome to the latest Washington crisis. The American people are supposed to be petrified at the threat posed by Russian spies who hack our emails, buy ads on Facebook and impersonate Americans in chat rooms. The evil Ruskies have the audacity to use phony websites to divide us over issues of racism and immigration — as if we aren’t perfectly capable of doing that ourselves.

The US frequently interfered in Afghan elections in support of one corrupt leader or another. Here an Afghan farmer who used to grow opium, a major source of corruption among Afghan leaders. Photo: Reese Erlich

And these no-goodnicks are getting ready to do it all over again for the 2018 elections!

Of course, the United States has been meddling in other countries’ elections for decades, sometimes resulting in the overthrow of governments and civilian deaths. But more on that in a moment.

What are the major allegations against the Russians so far?

* They hacked the email servers of the Democratic Party and the Hillary Clinton campaign. They gave the embarrassing material to Wikileaks, which made it public. Wikileaks denies the data came from the Russians.

* Trump campaign officials met with Russian diplomats and operatives in hopes of getting negative info on Clinton.

Trump officials, and Trump himself, may have committed all kinds of crimes, including lying to the FBI, money laundering, tax evasion and obstruction of justice. But there’s no evidence that the Russians succeeded in electing Trump, or even had a major impact on the elections.

The Russians didn’t hack voting machines. So there was no Russia-inspired vote fraud.

And even the Department of Justice, in its indictment of the 13 Russians, admitted, “There is no allegation in the indictment that the charged conduct altered the outcome of the 2016 election.”

Hillary Clinton lost the election because Trump’s campaign lies fooled people. She ran a bad campaign, which failed to mobilize the progressive Democratic Party base.

But even assuming the worst charges against the Russians are true, they pale by comparison to U.S. meddling in elections around the world.

Dov Levin, a post-doctoral fellow at the Institute for Politics and Strategy at Carnegie Mellon University, studied 117 cases of United States and Soviet/Russian interference in elections from 1948-2000. The United States accounted for a whopping 69% of the cases.

For example, the United States intervened in every Italian election for decades starting in 1948, according to Levin.

Italy had a strong Communist Party, which had spearheaded resistance to the Nazis during World War II. The United States feared that a democratically elected communist government would pull Italy out of NATO and either become neutral or even ally with the USSR. So the United States used any means necessary to keep pro-U.S. parties in power.

The CIA and other agencies shoveled money to the U.S.-allied Christian Democratic Party.

“The money often disappeared into the villas and Swiss bank accounts of politicians,” Levin told me. “We worsened corruption in Italian politics.”

By the early 1990s, Italy’s Cold War parties dissolved in the face of corruption scandals. “The whole system collapsed into dust,” said Levin.

Some United States intelligence officials justify such illegal interventions as necessary because we back the good guys. That view is echoed by some in the mainstream media.

In the 1980s, the United States created and financed a Nicaraguan rebel group called the Contras. They sought to overthrow the Sandinista government, which had come to power in a popular 1979 revolution.

The contras murdered more than a hundred teachers, doctors and other civilians working for the government in a U.S.-sponsored terror campaign. One faction of the contras shipped cocaine to United States to pay for their armaments. Those shipments helped create the crack cocaine epidemic in Los Angeles in the 1980s.

The Sandinistas won the presidency in free and fair elections in 1984. But in 1990 the United States made an all-out push against the Sandinistas. The CIA pumped money into the opposition party and planted derogatory news stories, using a classic CIA technique.

The CIA fed stories to German newspapers claiming Sandinista leaders had Swiss bank accounts filled with ill-gotten gains. The opposition used those reports to great effect, and it won the elections.

U.S. officials argued that fighting communism sometimes required backing nefarious characters. If fighting communism was the real U.S. motivation, then it would presumably would have stopped after the collapse of the USSR in 1991. But nooooooo.

The United States invaded Afghanistan in 2001 and it soon faced a political dilemma. It had to convince people at home and abroad that the United States was building a democratic nation. But the drug dealing warlords running the government weren’t interested in free and fair elections. They just wanted power.

The United States installed Hamid Karzai as president in 2002, but by 2009 he was causing problems for the United States. I spoke with Matthew Hoh, who was a State Department official in Afghanistan at the time.

“Karzai was weary of the war,” he said. “He opposed the U.S. airstrikes on civilians. He wanted talks with the Taliban, and we were against that.”

The CIA tried to use the 2009 elections to oust Karzai. First the elections were delayed by three months, a violation of the country’s constitution. Then the CIA promoted news articles, rallies and cash payments to politicians in an effort to create an anti-Karzai coalition.

Former Secretary of Defense Robert Gates in his memoirs called the effort a “clumsy and failed putsch.”

But Karzai outsmarted the United States through massive vote fraud. Karzai won when the main opposition leader withdrew from a runoff election.

Of course, the Russians have also interfered in elections, most recently in Ukraine and other areas formerly controlled by the USSR. They also sought, unsuccessfully, to impact the 2016 U.S. elections.

But contrary to the U.S. government portrayal of a sophisticated ring of cyber spies, the Russian efforts were decidedly old school and not likely to have much impact.

In the old days, the Russians would romance secretaries and entice them to steal files from their politician bosses’ file cabinets. These Russian “Romeos” would then plant the compromising documents in friendly media. Nowadays the spies can hack email servers and make embarrassing information public online.

Reprinted from 48hills.org with the author’s permission