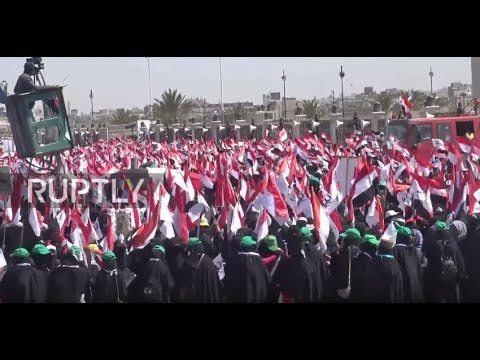 In Yemen‘s capital Sanaa, tens of thousands took to streets Monday to protest “three years of aggression” by Saudi Arabia and its allies in a war that has been backed by several western governments. This March 26 marks the third year since a Saudi Arabia-led coalition began a series of offensive attacks on Yemen, and the Houthi rebels who ousted an unpopular government in 2015.

On March 26, 2015 Saudi Arabia along with 10 of its regional allies, and with the blessing of the United States launched an indefinite military operation in Yemen in a bid to restore Saudi-allied former President Abd-Rabbu Mansour Hadi.

Hadi was placed under house arrest after a group of Zaidi Shia Muslims, known as the Houthis, marched to the capital and surrounded the presidential palace taking advantage of widespread rejection of Hadi’s policies, especially his decision to postpone elections.

Since, at Hadi’s behest, the Saudi-led coalition began its offensive which resulted in the death of at least 10,000 people, while 53,000 others have been wounded and Yemenis have had to face famine and medicine shortages.

Despite their efforts the coalition has been unable to push the Houthis out of Sanaa and northern Yemen. Instead, they have caused massive civilian casualties due to the indiscriminate bombing of hospitals, markets, and other non-military targets, which has led to the United Nations and human rights groups like Amnesty International to condemn the attacks for causing the “world’s worst humanitarian crisis.”

The demonstration took place in Sabaeen Square, in Yemen’s capital Sanaa, which remains under Houthi control, a day after Riyadh reported intercepting seven Houthi missiles. “A serious development,” according to coalition spokesman Turki al-Malki who said the missile attack “proves that the Iranian regime continues to support the armed group with military capabilities.”

Analysts fear the attacks might escalate the Saudi-led coalition’s aggression on Yemen, as it did last November, when, in response to a similar attack the coalition tightened a longstanding blockade of Yemen.

The war is losing support among western nations. In January, Germany decided to stop all arms export to countries involved in the war in Yemen, following Norway’s suspension of arms sales to the United Arab Emirates for its involvement in the war. In an exclusive Associated Press report, the UAE was accused of carrying out torture and brutal interrogations against Yemenis in its military bases and camps in Yemen.

However, the U.S. and the United Kingdom, the coalition’s western allies, continue to provide logistic support and to profit from arm deals.

U.K.-based Campaign Against Arms Trade revealed that since 2015 the U.K. sold more than US$6.3 billion in weapons to Saudi Arabia, while the Stockholm International Peace Research Institute shows that only in 2016 the U.S. sold US$1.9 billion worth of arms exports to Saudi Arabia, despite growing criticism.